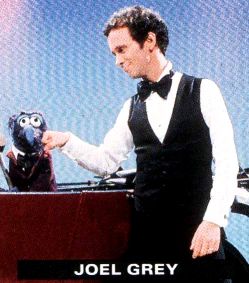 So far, I’ve been hitting the “first few episodes” theme pretty hard in this column. Pretty soon, I’m going to have to find something else to talk about besides how the Muppet Show producers figured out the tone of the show. But it’s only episode 3, the Joel Grey episode, so I think maybe I can squeak by with one more “manifesto of Muppet sensibility.”

The opening number is “Comedy Tonight,” from A Funny Thing Happened on the Way to the Forum. It’s a bouncy, sarcastic song, performed here by monsters and murderers. Seriously. The curtain opens to show the courtyard of a creepy abandoned house, with high walls on both sides, kind of a like a prison yard right outside the Addams Family house. It’s shot through a dark blue filter, casting everything in a spooky twilight. Muppet monsters trade lines: “Something familiar, something peculiar. Something for everyone, a Comedy Tonight! Something appealing, something appalling. Something for everyone, a Comedy Tonight!”

The number moves fast, with a visual gag every couple of lines. One monster ducks as a knife sticks into the wall. Scary-looking criminal types poke their heads out of the windows, and then Crazy Harry pushes down a plunger and blows one of them up. Monsters pursue a little girl. One monster shoots a revolver at one of the criminal guys, narrowly missing shooting him in the head. “Nothing of fate! Nothing of state!” they sing, as a monster carries the little girl away. “Weighty affairs will just have to wait.” WAIT! cries the little girl. More monsters get blown up. The number ends with the monsters, the criminals, and the captured little girl, all singing together.

Now, I was five years old when The Muppet Show started, and I remember this number. This scene had pretty much everything that should have scared me out of my wits — darkness, monsters, kidnappers, explosions, guns and knives. I should have had nightmares for weeks about this… but I loved it. There’s something so fun and exciting about it, and it moves so fast, that you almost don’t notice how amazingly dark and weird it all is. It’s like the Muppets are exploring the boundaries of their new show, and discovering that they can do just about anything. Even death and danger become a joke.

The next big number is Joel Grey singing “Cabaret.” They cut out the prostitution jokes, but still — all the Muppets are in a bar, drinking and watching the dancing girls.

Kidnapping, knife throwing, raucous nightlife. Is there anything these puppets can’t do?

My Week with The Muppet Show: Week Two, Day Two

My Week with The Muppet Show: Week Three, Day Four

My Week with The Muppet Show: Week Four, Day Four