The Epic Muppet Mural of Epicness

Circa 1984, an artist named Coulter Watt painted a Muppet mural of epic proportions for the Jim Henson Company’s New York City office. The mural is instantly recognizable by Muppet fans, having been used as the backdrop for several photographs, including several famous pics with Jim and Kermit.

Because a row of theater seats obscured the bottom of the mural, we’ve never really seen the entire piece. Recently, amateur photographer Jeff Christiansen got the rare opportunity to tour the Jim Henson Company lot in California, where the mural is currently on display. He took some high resolution photos, and now we finally have a near complete view of the mural in crystal clear clarity!

Give this bad boy a click to see it in full detail. (Note: I did some Photoshopping to combine a few of Jeff’s photos to try and get the most complete image possible. Visit Jeff’s Flickr page to see the originals!) 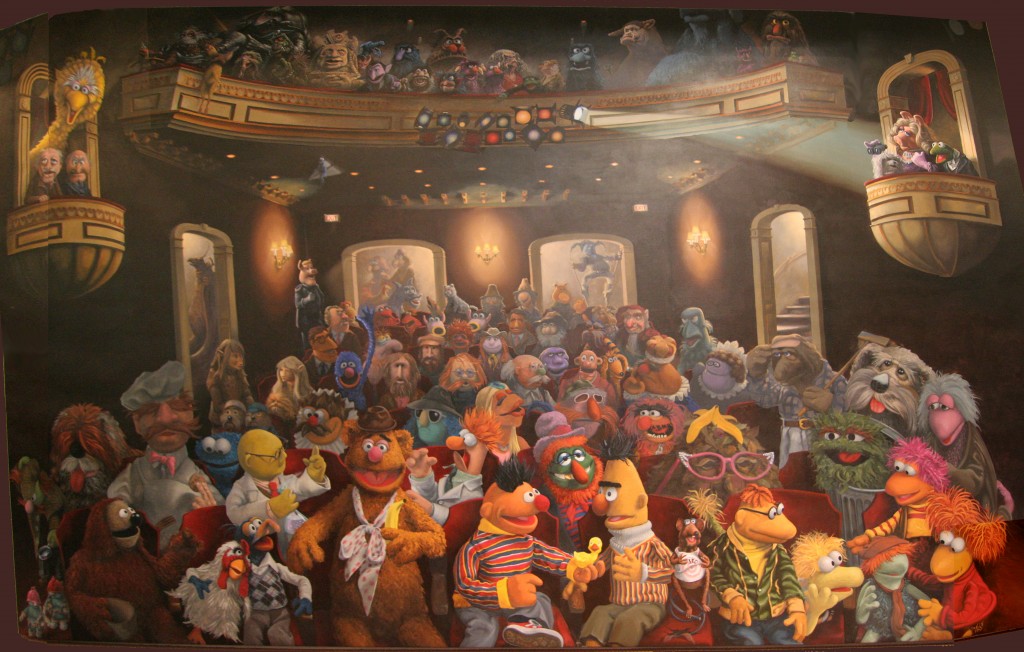 Isn’t that a beaut?

There’s some great stuff in this picture. Like Cookie Monster ogling the Swedish Chef’s cookie. And Oscar and Beauregard giving two very different looks to the Trash Heap. And the single spotlight shining on the one and only Miss Piggy. And the multitude of obscure characters.

Speaking of obscure characters, do you think you can name every character in the image above? Click here to take our Sporcle quiz and see if you know everyone from the front row to the balcony!

Thanks to Jeff Christiansen for sharing his photos with us!

Click here to make a collage of a photograph of a painting on the ToughPigs forum!

ToughPigs Art: Muppets Through the Years with Ian Vazquez