My Week with MuppetZine, Part Two

When last we left off, MuppetZine was just getting started, with one full year (and four issues) under its belt.  But with the second year comes more challenges and an unspoken promise to up the ante.  Is Danny Horn up to the challenge??  Read on and find out! 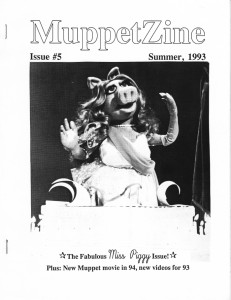 Much like The Muppet Show’s Vincent Price episode, this is the very first theme issue of MuppetZine, devoting every page to the diva who deserves the decadence: Miss Piggy.  And it’s quite a tribute, as you’ll soon see.

But first, the news.  The big story was that Muppet Treasure Island will soon be in production!  And everyone finding this out through a self-published ‘zine immediately began creating the internet so we’ll never have to wait so long again.  There’s also an update on the “in development” productions: Pinocchio, Into the Woods, Zoetrope, and CityKids.  And as we all know, these are now your favorite movies and TV shows.  Because they all happened.  Right.

But enough of that, let’s get back to the pig.  “Miss Piggy: The Life of a Pig” is a pretty thorough biography, featuring quotes from Frank Oz, Jim Henson, “The Works” writer Christopher Finch, Kermit the Frog, Jerry Juhl, former lover Charles Grodin, and “Miss Piggy’s Guide to Life” writer Henry Beard.  The article runs for eight pages, which is an awful lot of real estate for a ‘zine.  But it’s rather brilliant, mixing stories about her creation, her fictional biography, and her roles in all of the different Muppet productions.  It really is a fascinating read, especially if you don’t keep kosher.

There’s a cute page full of Piggy trivia, including an unfortunately-timed article from People Magazine about Miss Piggy breaking up with Kermit.  It ran in April 1990, which was just one month before Jim Henson’s passing.  So you can imagine why that story might’ve been a little overlooked.  I just hope those two crazy kids patched things up.

The rest of the issue contains more transcripts of Miss Piggy interviews, a collection of Miss Piggy merchandise, and lots of grainy black-and-white photos.  Of Miss Piggy.  Naturally.

The issue ends with a promise that the next one will be Piggy-less.  I just hope she didn’t read that! 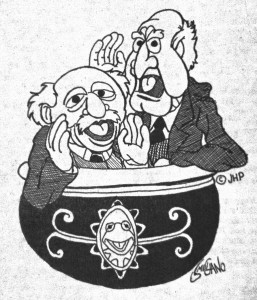 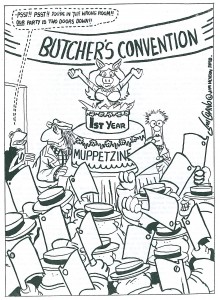 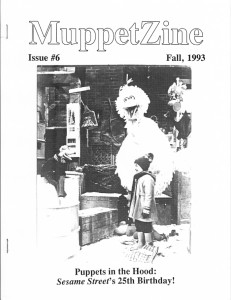 There was a big change starting with this issue.  One that threatened to rock the status quo for the foreseeable future, and could’ve possibly sacrificed MuppetZine’s entire audience.  Rather than charge $1.50 per issue, subscription prices were raised to $2.50.  What an outrage!

So, let’s see what was happening in the fall of 1993.  Sesame Street was turning 25 (it won’t last).  CityKids and Dog City are still moving forward while Dinosaurs faces extinction (get it????).  No new news on Muppet Treasure Island (it won’t last).  Muppet bible “The Works” finally becomes available (and I guarantee it is currently sitting on your shelf).  And one of my favorite non-existent Henson productions is announced: Screaming Edith.

When Sesame Street turned 25, they pulled out all the stops.  There was a special and a video release and an album and people actually took notice of it all.  I mean, it’s not all that often that Big Bird and his pals get to celebrate a 25th anniversary, especially considering they’re all like 6 years old or younger.  This issue of MuppetZine covers the entire celebration, as well as a little history in the form of “The Sesame Street Backlash”, an article remembering the negative press the show got way back in 1970.  And they said it wouldn’t last!  (No wait, I think that was me.)

After another batch of Muppet Show episode guide entries, Danny transcribed an interview that didn’t even have any Muppets in it.  He was invited to appear as a “Muppet Expert” on a local radio station show, “Kid’s Corner”.  Even after just a year-and-change of running the MuppetZine, Danny was already a local celebrity!  (Note: If any radio stations want to interview me, I’m available!  Anyone?  Bueller??)  Danny talks about Muppet history and his favorite Muppets and takes call-in questions from kids listening at home.  It’s positively quaint in its low-techness. 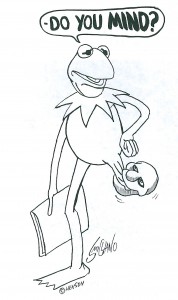 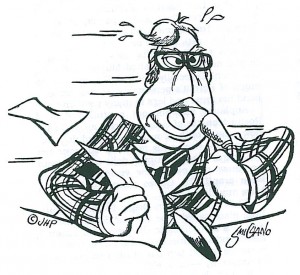 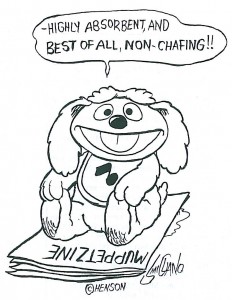 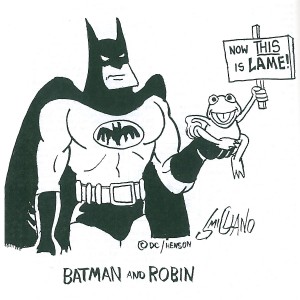 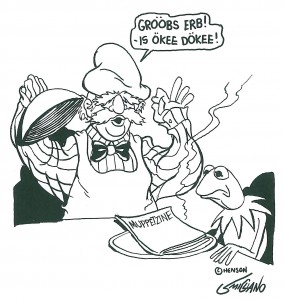 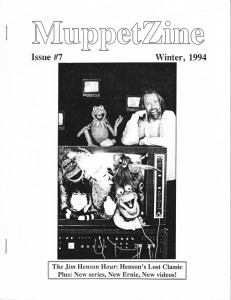 It’s the Jim Henson Hour issue!  At this time, if you didn’t have your VCR set back in 1988, chances are all you had were some faint memories of some sort of awesome, slightly experimental Muppet program existing on some channel.  DuMont, maybe.  But thanks to MuppetZine, we can make the smallest of attempts to relive those days.  Ah, memories.

Muppet news for this issue: Some sort of delay for Muppet Treasure Island (oh, will it ever come out???).  Introducing the new “Secret Life of Toys” TV series.  Ernie makes his first post-Henson appearance.  The slow death of Dinosaurs is still rattling on.  CityKids is nowhere to be seen.  And in the “Huh, I had no idea!” category, Frank Oz directed an Energizer Bunny commercial.

This issue also makes an attempt at going digital, long before technology could be ready for the epicness of MuppetZine.  The ‘zine has a new partnership with “DigitalPopcorn”, a company that brings online ‘zines into your home via your refrigerator-sized computer.  (Offer not available in the 213, 310, or 818 area codes… no, really.)  According to the article, “DigitalPopcorn is a new, Los Angeles, Mac-based BBS+ that utilizes the easy-to-use FirstClass graphic interface developed by SoftArc, Inc.”  Got all that?  No?  Just pay your $2.50 for the paper edition like the rest of us.

Next up, Danny recounts the history of The Jim Henson Hour, as promised on the cover of the issue.  Re-reading this segment makes me nostalgic not just for the show, but for the idea that there was a time in which Jim Henson could surprise me every single week.  It’s a Sesame Street anniversary one week, then Greek myths with Creature Shop puppets, then Miss Piggy’s adventures in Hollywood, and finally revealing all (well, most) of the secrets behind the Muppets.  How this show didn’t catch on is beyond me, but that’s an article for another day.

This edition of “The Balcony” reveals some strong opinions from the fans: Sesame Street isn’t as good as it used to be, Steve Whitmire doesn’t quite have Kermit’s voice down yet, and all Muppet merchandise sucks.  Y’know, there’s something so refreshing about cranky Muppet fans.

To counter those opinions, Danny filled two pages with his review of the new (25th) season of Sesame Street, and it seems like he loves it a whole lot.  “Around the Corner” is chock-full of fun possibilities!  This new character “Zoe” will take some getting used to.  Gina and Savion give a raspberry to a racist!  In the end, Danny is filled with hope for the new season, and expects it to continue to get better.  He may not always be snarky, but he knows how to voice an opinion!

On September 24, 1992, the Museum of Television and Radio held a seminar honoring Jim Henson’s life and career.  Panelists included Jane Henson, Frank Oz, Jon Stone, Jerry Nelson, and Michael Frith.  And because exactly 0% of MuppetZine readers were in the audience, Danny graciously transcribed the entire discussion (part one in this issue, the rest in issues #8-10).  The conversation mostly consists of Henson history, so there’s not much new for those of us with Muppet encyclopedias in our heads, but it’s still fascinating to think of seeing such great talents in one room at the same time talking about Jim.    We should be so lucky to get half of these names together again to talk on the record about their Muppet memories.

After more toy pictures and The Muppet Show episode guide, the issue ends with two fan articles that “don’t fit anywhere else”.  Reader Josh Epstein gives 10 tips on how to act more like a Muppet (“Don’t blink”, “When eating cookies, chomp them to bits, but let all of the crumbs fall out of your mouth”, “Be able to act, sing, dance, and explode on cue”, etc).  There’s also a reprint of David Letterman’s “Top Ten Reasons Hilary Clinton Won’t Be Invited Back to Do Sesame Street”, including such gems as “Two words: Puppet tax”, “Mistook Oscar the Grouch for a rat, beat him to death with a rake”, and “Kept saying, ‘Where the hell is Barney?'”  Comedy gold (?). 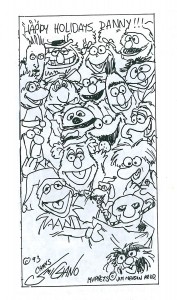 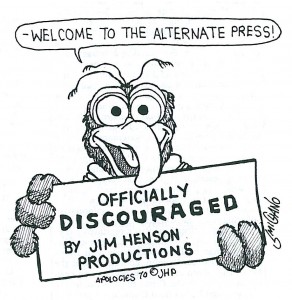 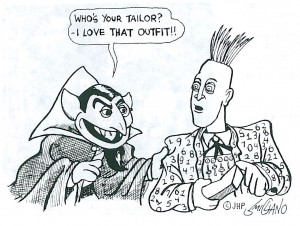 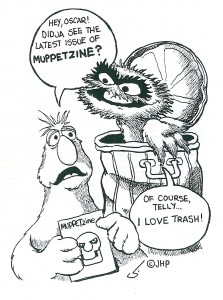 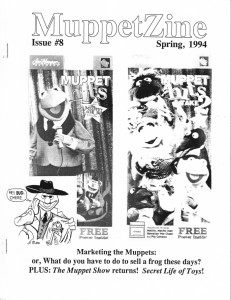 Despite the fact that MuppetZine has featured merchandise in every single issue, Danny decided to devote another full issue to the toys and books and marketing departments surrounding the Frog.  And why the heck not, since merch has been such an important part of Muppet history.  Or so my bank account would attest.

This issue begins with a letter to the editor.  No, not to MuppetZine, but a printed letter written by Danny Horn to the editor of the Daily Pennsylvanian, pointing out the error of a writer who claimed that Kermit the Frog has been voiceless since Jim Henson’s death.  Danny writes, “As an Immature-American, I must object to [the writer’s] attempts to erase and alter my cultural history to fit his metaphors.”  Well said, Danny.

Muppet news includes the return of The Muppet Show to syndication (on Nickelodeon), rumblings of a second season of CityKids (which, as you may have guessed, never happened), Dinosaurs might not be canceled after all (possibly the most frustrating ongoing news story of them all), and the Muppets’ new partnership with the NHL (because, y’know, Muppets and hockey go together like, uh, Muppets and… hockey).

The feature article, “Marketing the Muppets”, questions the strategy of what Danny refers to as “schizophrenic” marketing.  Because the Muppets were appearing in some merch looking “cool” in their sunglasses as well as in their classic looks, on children’s merchandise as well as retro stuff for adults, there didn’t seem to be much focus on the brand’s output.  And with a new movie and (eventually) a new TV show on the way, MuppetZine calls out the Henson Company to put a little more effort into the stuff they put on the shelf to ensure the longevity of the brand.  Funny, it almost feels like we could have this same argument today…

The Secret Life of Toys premiered between the previous issue and this one, so Danny gives his two cents over the course of two pages.  His main thought: Rugby is awesome; everyone else is trying to keep up.  Without having seen this show, I can guess that this sentiment is 100% true.  Rugby is the best.

The second segment of the Museum of Television and Radio seminar is much more interesting than the first, as it opens up to audience questions.  Frank Oz explains why he loves Grover so much (“He’s wiry.  He’s tough.  He gets emotional.”).  Jerry Nelson talks about Floyd, and how he thinks Floyd probably started as a beatnik, then got into jazz, then rock and roll (and skipped right over punk rock), but held on to that hipster sensibility.  Michael Frith discusses how to get started in character design (“Learn computers!”).  I honestly can’t think of a more fascinating conversation.

The issue concludes with a report on the upcoming Flintstones movie, which featured puppets by the Creature Shop.  I honestly don’t remember if I liked The Flintstones or not, but I definitely remember being completely floored by the puppets.  And now I’m convinced that cavemen and dinosaurs lived together in suburban harmony. 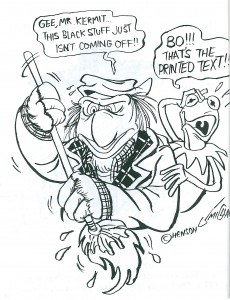 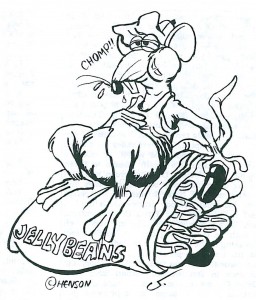 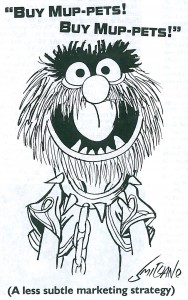 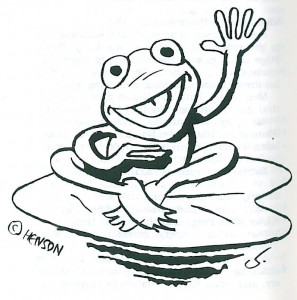 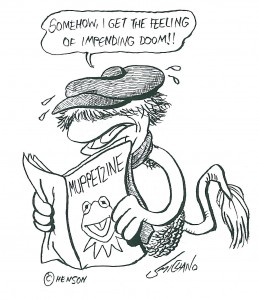 Head back soon to read about issues #9-12, which cover Fraggles, weirdness, and puppets!!!

Click here to stop the presses on the ToughPigs forum!

My Week with MuppetZine, Part One

My Week with MuppetZine, Part Three

My Week with Muppetzine, Part Four

My Week with MuppetZine, Part Five