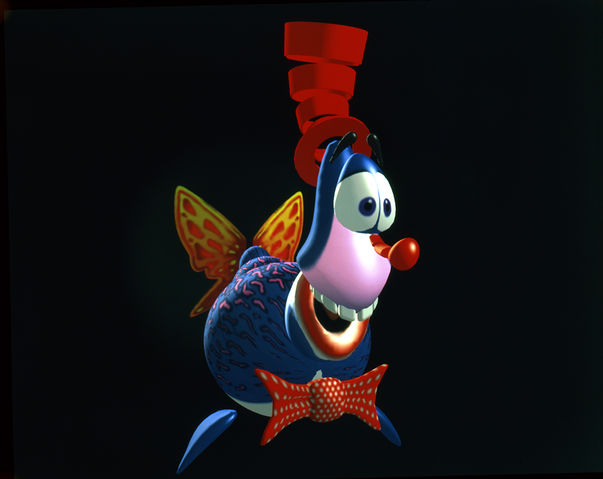 Oh poor Waldo C Graphic, nobody loves you. Created for the much-maligned Jim Henson Hour in 1989, one could argue that Waldo C Graphic is the Poochie of the Muppets. If you don’t get that classic Simpsons reference, let me break-it-down for you: he’s a later addition to the beloved Muppet pantheon, he is very much of his era and he is filled to the brim with more ‘tude than a Ninja Turtle. Waldo never really worked, and there’s a lot of reasons why.

Waldo was invented by Jim Henson to be the world’s first performable computer-generated puppet, which is pretty awesome and innovative. Not a shock that Henson thought of this, he was, if nothing else, totally awesome and innovative. He was performed live on-monitor by Steve Whitmire along with other real puppets in scenes using a low-res version of the character and a motion-capture mitt called a Waldo (which he was named after, get it?).

Later, Waldo’s animation and characteristics were smoothed out using further computer animation. A two-minute segment with Waldo took about 120 hours of rendering into high-resolution on early Nineties-era computers, as is explained by Henson in the informative behind-the-scenes clip from The Jim Henson Hour below.

Because of technical limitations, Waldo gets the short end of the stick on The Jim Henson Hour, often appearing as more of a series of brief visual gags than a character. Check out the clip above. Waldo appears as a hat, a dinosaur and a power-saw, but does Waldo ever get to appear as… himself?

This is a big difference between Waldo and more beloved Muppets. One of the aspects of The Muppets that is so enduring is that each one is written to have an inner-life and a role within the bigger roster of the characters. For example, we know that Gonzo often falls romantically for chickens, that Fozzie will always be insecure in his comedy, and that Marvin Suggs will always try to wallop tiny furry creatures for the sake of music.

But Waldo? What does Waldo like? Hat shopping? Collecting butterflies to use as a tail? What does he dislike? Analogue media? Being trapped in a two-dimensional plane when he himself is three dimensional? What is his role with the rest of The Jim Henson Hour’s characters? He’s stated as being the demographics expert on the show, but he doesn’t really deal in demographics in the same way that Bunsen and Beaker deal in science experiments or the way that Miss Piggy deals in stardom. He just transforms into a few other things and is then gone again. So we can all can conjecture what’s going on inside the crudely-rendered head of Waldo C Graphic, but the world will never actually know. 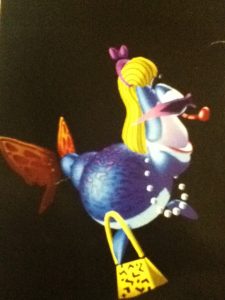 This is a rare case of Henson being too enamoured with new technology, but the technology not serving the story first. Henson is not guilty of this particularly often, but this is a Dark Crystal-like trap that he falls into here. Maybe if there was a way for Waldo’s sequences in The Jim Henson Hour to be longer, he would be a more fleshed-out and warmer character. But here Waldo comes off as cold and just a gag. There’s definitely something Uncanny Valley-esque about Waldo. He probably wasn’t a great addition to the new Muppets created for The Jim Henson Hour, which was reviewed on the whole as being colder and more biting than The Muppet Show already (sound familiar, modern Muppet fans?).

The Jim Henson Hour only lasted for twelve episodes, not all of which were originally aired on NBC. You’d think that would’ve been it for Waldo, but Henson used him again in Muppet*Vision 3D, the last Muppet-related project Henson worked on before his death. You can tell that Jim really wanted to make Waldo work, none of the other new Muppets from The Jim Henson Hour make it back for Muppet*Vision 3D (save for Bean Bunny, who is technically from Tale of A Bunny Picnic a few years earlier), but Waldo gets a starring turn along with a more classic cast of Kermit, Piggy, Fozzie and the rest of the gang.

Waldo makes his first Muppet Vision 3-D  appearance about halfway through as being created by Bunsen and Beaker at Muppet Labs. He proclaims that he himself is “the spirit of 3-D” and then makes a connection with the audience that we haven’t seen from the character previously: “You know, all these other people think I’m just talking to them, but I’m really just talking to you!”. Yup, for just one moment, we get to have a little intimate tete-a-top-hat with Waldo.

But, right after that, Waldo screws it up for himself and goes crazy, doing a bunch of ol’ visual transformation gags and bouncing on audience member’s heads. Then, as quickly as he was created, Bunsen exclaims “Well, I think we’ve had just enough of Waldo, Beaker…” (speaking not just for himself, but definitely the audience, too) and then they attempt to “deactivate” him. Waldo is then blown-up into a bunch of mini-Waldo’s, which are sucked up into a “Vacuum Muppet” with everything else, including the screen we’re watching Muppet*Vision 3D on. You still with me? No? It’s just your typical meta-Muppet the form-is-the-function and the function-is-form stuff. That’s all you need to know. 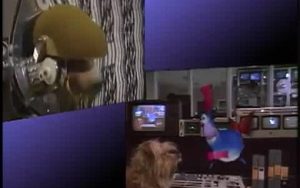 Anyhoo, one Waldo is left, floating in a black void before he transforms into a yellow cab and amscrays. When we next see Waldo, he is trying to convince a much more loved Muppet-neuvo, Bean Bunny to run away with him, but the elder Muppets convince Bean to stay, because they like him. Waldo also stays, much to their unenthusiasm, and proceeds to destroy Muppet*Vision 3D’s closing number. Finally, the Swedish Chef takes matters into his own all-too-human hands and attempts to murder Waldo in cold-blood with a musket and a cannon.

Guys. Guys. I honestly don’t think that anyone at that point in the scripting process of Muppet*Vision 3D were fans of Waldo. If you take a step back and look at the whole 3-D spectacle, he’s kinda the villain of the piece.

What went wrong with poor Waldo? Is he just a character created with methods ahead of his time, or is there something more that makes him so anachronistic? I think that something that’s a big problem with Waldo is his incorporeal nature. The rest of the Muppets have a lot of charm because although they are inanimate objects being puppeteered: they are actually there. There is a flocked fleece, foam and fur tangibleness to them that has made them warm and wonderful for over fifty years. 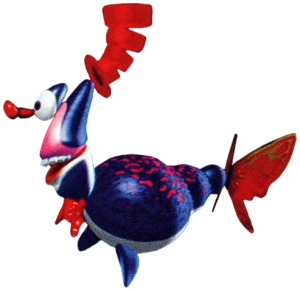 Then there is Waldo, who doesn’t get to ever be real. Well, none of the Muppets are real but Waldo is DEFINITELY not real. His portrayal in Muppet*Vision 3D is on-the-money. He’s a Henson experiment run-amok, made almost-real by ambitious technology that hadn’t caught up to itself yet. Waldo has a hard time connecting with his fellow Muppets and his audience, because we’re never allowed into his inner world. We’re not really allowed to know anything about him other than he’s annoying. Waldo is truly The Frankenmuppet – not Muppet or computer graphic, but bizarre hybrid of both. It’s not a surprise that he was never used after Muppet*Vision 3D. It was his own creation that was his undoing.

I’d like to imagine that Waldo escaped life with the Muppets to go live on an island with other misfit early computer-generated graphics and characters, like the Pixar Lamps, or a bunch of creepy VHS company logos, and they’re all together hanging out and talking about they’re better off without attempting to connect with the dregs of humanity, who never truly “got them” at all.

Click here to jump into another dimension with the ToughPigs forum!

Secrets of the Third Dimension