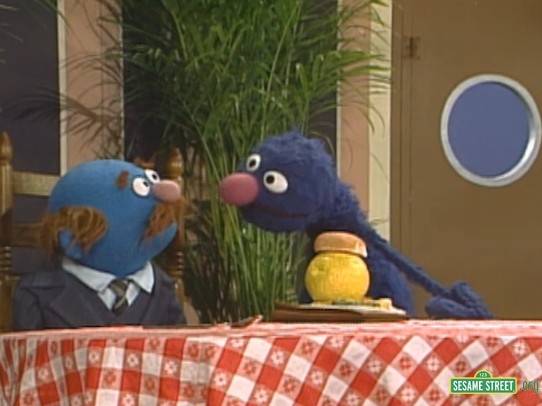 Waiter Grover – debuted around season 3
These segments feature Grover as a waiter at Charlie’s Restaurant, often serving the Fat Blue Anything Muppet known as Mr. Johnson, and usually getting his order wrong in some way. Mr. Johnson has ordered such items as alphabet soup, hamburgers (he preferred to have the big one), and spaghetti, and has had to deal with a service bell, the wind when dining outside, Rhyme Day, and even another waiter. Around season 20, it became common for Mr. Johnson to have to deal with Grover not just at the restaurant, but everywhere he goes. A handful of home video releases, including Let’s Eat! Silly Food Songs and A Celebration of Me, Grover!, feature the waiter Grover format in the linking footage.

Sesame Street News – debuted around season 4
Also known as “Sesame Street News Flash” or “Kermit News”, Sesame Street News employs Kermit the Frog as its top news reporter (with Warren Wolf filling in on one occasion). Many of the news reports involve fairy tales such as Cinderella and The Three Little Pigs, nursery rhymes such as Humpty Dumpty and Little Miss Muffett, historic events such as Christopher Columbus’s trip around the world and even the first day of school in history, and often interviewed such recurring characters as Don Music and Dr. Nobel Price. A number of Sesame Street specials have included original Sesame Street News segments. Sesame Street News has recently been revived in season 45, with Murray taking over reporting duties.

The Adventures of Super Grover – debuted around season 5
A series of segments featuring Grover as everyone’s favorite super hero, Super Grover (alias Grover Kent), as he tries to solve other people’s problems, such as stopping a fight, getting a computer to work, and saving energy. Super Grover often employs silly methods (such as saying “wubba wubba”), blissfully unaware that the needy person has solved their problems on their own – and credits himself for a job well done. Grover has also appeared as Super Grover outside of these segments, in many street stories, movies, specials, books, and other things.

Here is Your Life –debuted around season 4
A reunion show hosted by Guy Smiley, this parody of This is Your Life finds Guy honoring the life of various inanimate objects that are alive for these segments. Guy has celebrated the lives of such characters as an oak tree, a house, and a carton of eggs. Later on, there was The New Here is Your Life, with Sonny Friendly taking over hosting duties. There have also been segments with similar titles, such as “Here is Your Lunch” and “This is Your Story.”

Alphabet Chat – debuted around season 10
Alphabet Chat is hosted by Mr. Chatterly, who talks about different letters of the alphabet. Unfortunately for him, his show constantly gets interrupted by random things. Early installments featured a show-within-a-show format, with a crew setting up the show, while later installments took place entirely in-show, with Mr. Chatterly interviewing various characters about the featured letters. One episode in season 25 involved Mr. Chatterly coming to Sesame Street to get Oscar’s pet pig, Preposterous, to appear in a show about the letter P.

Monsterpiece Theater – debuted around season 11
Hosted by Alistair Cookie (alias Cookie Monster), Monsterpiece Theater is an anthology series showcasing many cultural tales, including “Chariots of Fur,” “Gone with the Wind,” “Much Ado About Nothing,” and “Dr. No.” Grover has starred in more productions than any other character, while Cookie Monster himself has starred in three, and other segments have featured such talent as Elmo, Herry Monster, Telly Monster, Kermit the Frog, and Prairie Dawn.

Ask Oscar – debuted around season 15
Ask Oscar involves Telly Monster reading questions from viewers who want to ask Oscar something, with Oscar providing a grouchy answer. He’s answered such questions as what the letter X is used for, how grouches pack suitcases, and what the longest Grouch word is. On one occasion Linda filled in for Oscar, while others have occasionally filled in for Telly. After years of absence from the show, the Ask Oscar format was used as a street story in season 37, in which Telly tries to get Oscar to do another edition of Ask Oscar. 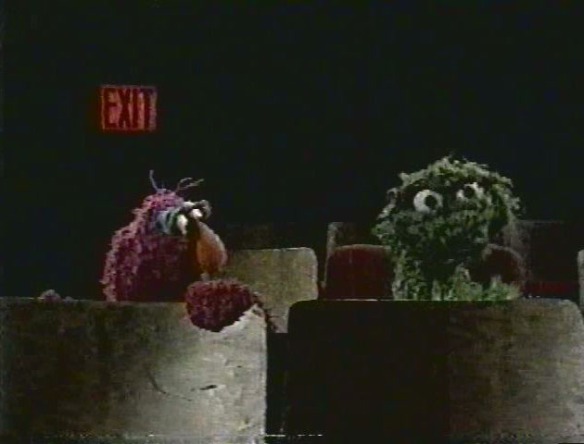 Sneak Peek Previews – debuted around season 15
Another segment hosted by Oscar and Telly finds them in a movie theater where they watch an existing Sesame Street film or animation insert and then give their opinions, with Telly giving it a number of “Wows” and Oscar providing a number of “Phooeys”. The Sneak Peek Previews format was also used for the linking plot of the home video Sing Yourself Sillier at the Movies. 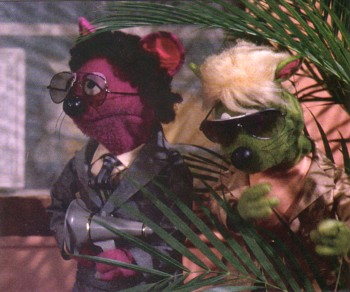 Miami Mice – debuted around season 16
Miami Mice starred Tito and J.P. as they solved problems for other characters. Their missions have included helping Ernie find out why he can’t get his Rubber Duckie out of the repair shop and giving The Count a ride to the space station so that he can provide the countdown. The world-famous Miami Mice even got to be interviewed by Kermit the Frog once, who wanted to talk about adventure, a subject they actually know nothing about.

Spaceship Surprise – debuted around season 20
A parody of Star Trek, Spaceship Surprise featured the crew of the Spaceship Surprise, who travel from plant-to-planet to be surprised by what they find, because they like surprises. Each planet is themed around the start of various words, such as Planet TR and Planet SH. Several years after the original segments came at least one installment called Spaceship Surprise: The Next Generation, with an all-new cast.