Ryan Dosier – Did you hear the school bell? That means it’s time once again for Muppetology 101! Welcome back to the fourth installment of Intro to Muppet Performers where we spotlight six more of the men and women who bring the Muppets to life. Let’s get started shall we?

Muppetology 101: Intro to Felt and Force

The Muppet Mindset Most Wanted, Part 2 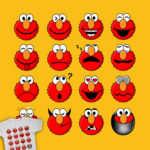