When ColourPop announced a new collaboration with their Muppets holiday makeup collection, ToughPigs writers Beth Cook and Julia Gaskill wanted to try it out. This isn’t the first time we’ve seen Muppets makeup hit the shelves. In October 2020, Disney collaborated with Ciaté London to release a 6-piece Miss Piggy Collection. And back in 2011 with the release of The Muppets, we got a Muppets-inspired eyeshadow palette from The Balm, a 3-piece Miss Piggy Collection from Mac, and Muppets nail polish from O.P.I. But this new ColourPop collection is specifically Muppets holiday themed! Does it bless us all, or does it slip and fall on the icy patch?

Here’s what’s included in this set, and our thoughts on how they’re named (yes, the names are all lowercase for some reason).

**We’ve put “nude” in quotation marks because that word is never applicable to all skin tones.

***With these color swatches, keep in mind that Beth and Julia are two white women living in the sunless Pacific Northwest and therefore are practically translucent, so take that with a grain of salt.

Our initial thoughts upon unboxing is that the packaging is very cute. Each item comes in an individual cardboard box, and even those are cute! The ones from the “super shock shadows” have these little pop-up cardboard images of the Muppets they’re representing, and Beth is strongly considering saving them to make them part of her regular holiday decorating. Once the boxes are discarded, the Cute Packaging Award goes to the “glimmer lip” set, where each has a printed image of its character’s neckwear: Piggy’s pearls, Beaker’s necktie, Fozzie’s polka-dot tie, and Animal’s spiked collar and broken chain.

When looking at which Muppets ColourPop has chosen to represent, we first wondered, why no Janice? Why no Gonzo? Why is Fozzie here?

Julia Gaskill: [after removing the swatch tests] Did the glitter come off of your arm? Cuz it seems like the glitter just spread on my arm.

Beth Cook: I think most of it came off? Cuz there was a lot of glitter. But there’s definitely still gonna be some glitter leftover for a while. Which I’m not mad at, but I am glad that the red pigments came off really easily, which is not always the case. [Granted, Beth had said reg pigments on her arm for like five minutes; it may stain more the longer you wear it.]

Julia: [applying the “being green” and “yaaaay!” eyeshadows] Oh my god, it’s so green. Oh my god… I think the Piggy eyeshadow “holiday hostess” works pretty well for blush, it’s like shimmery but subtle. As opposed to my ****in’ eyeshadow.

Fozzie is the Muppet who I was like—on makeup? You know, I get Kermit, cuz he’s the main Muppet, he’s gonna be on everything. Piggy obviously makes sense. Animal makes sense in a weird way, cuz he’s like a rock-and-roll drummer, a lot of rock stars wear makeup. Fozzie I wasn’t sure, but, surprisingly, go Team Fozzie, I guess.

Beth: We have not yet tried the glitter gel—ohhh, my goodness. So, speaking of the different kinds of glitter in this set—

Beth: It’s so glittery. Yeah, I feel like it’s probably gonna stay in my collection for those “Oh s***, I need to be a fairy, right now” moments.

Julia: Yeah, you know, going to something Pride-related.

Beth: So the lip thingies are sheer but also very pigmented. And they feel pretty hydrating, which is nice. The Animal “glimmer lip” is a nice, true bright red. And I really like the Beaker one on me; it’s not too orange, like I was worried it might be.

Julia: [trying to take the cap off one of the lip thingies] You have to screw these so much, why is it so much work?

Beth: [laughs] I did that the first time, too, and I forgot to tell you.

Julia: Yeah, I don’t know how I feel about the Fozzie one on me.

Beth: I feel like if you’re into a neutral lip, like if that’s something you look for in makeup, then this is probably a good one?

Julia: Yeah, I have some neutrals, but I think it’s a little darker than I usually go.

[Beth’s afterthought on the “glimmer lip” products: What a missed opportunity for flavors! Especially for the holidays, you could do either cinnamon or cranberry for Animal, maybe champagne or rosé for Piggy, gingerbread for Fozzie, and cucumber-melon (get it, honeydew?) for Bunsen and Beaker.]

Beth: On the Piggy side, I used the “kissy kissy” lip—that is appropriate. And then I used “haute holidays” as both base blush and base eyeshadow. And then for glittery top eyeshadow, I used “celebrate moi.” And then, for sparkly cheeks, I used the “who, moi/it’s moi.”

Julia: For my first look, I used “being green” as the base for my eyeshadow, and I did the “yaaaay!” over that. I used a bit of the eyeshadow “holiday hostess” as blush, and I think I did the Missy Piggy lip color.

Julia: And then for the second look, I did “snow business” with “wocka wocka” over it for eyeshadow. I tried the fozzie “glimmer lip,” but then I took it off before I took a picture and I did the Beaker one instead. And I also threw on a little bit of the “who, moi/it’s moi” on my cheeks as well.

Julia: Overall, I think it’s pretty solid makeup. As someone who doesn’t use a ton of eyeshadow, glitter, or lipstick these days, you know, it feels like something that if I was doing like a glow-up look, I definitely would use these.

Beth: Yeah, same. I have several eyeshadow palettes with many colors that I rarely use. I’ll take them to, like, a weekend event where I dress up every night, and then don’t touch them again for the next six months. I think I might keep around one or two of these for like a last-minute “Oh, I feel schlubby and I wanna look less schlubby,” just like, whoosh, out the door. I’m always striving to find clothes, hair routines, skin routines, and makeup that are maximum results with minimum effort. Just because I feel like it takes so much work already just to maintain a human body.

Julia: Yeah, there’s a reason I don’t do a s***-ton of makeup, especially, like, This Day and Age. I just wanna look base level presentable, and, you know, if it’s a nicer event I will go a little bit above and beyond.

Beth: So you can buy any of the items individually, but the whole set is $99.

Julia: You’re getting sixteen colors in the big palette, four individuals, one big thing of glitter, and four lip colors—that’s twenty-five different products. That’s essentially like $4 per different color. I don’t use a ton of makeup, and so there are people who probably could speak better to this, but to me it seems like that’s a pretty good price for the amount of stuff that you’re getting. And it’s Muppet-themed, which, you know, is a huge win.

Beth: And it’s more Muppet-themed than I was expecting. When I was looking at the names of the various eyeshadows, I was like, “Mm, some of those aren’t very Muppety,” but I appreciate the packaging, and I would say the only thing that would make this cooler—although probably more expensive—is to have little mirrors in both the individual eyeshadows and the eyeshadow palette.

Julia: Yeah. I guess my only complaint is that I thought that there was gonna be a more diverse array of Muppets. Like I thought, you know, Piggy would be everywhere. But it could’ve been like, Kermit’s on the eyeshadow, but then like Rowlf’s on the lip gloss, and more characters are referenced in the big palette. And so, I think that was maybe a little bit of a loss, you know, Electric Mayhem, Rowlf, Gonzo is weirdly missing. But there were some good shout-outs on this palette, some good references to things. I wonder if they had anybody from the Muppets working with them.

Julia: Like, how the collab itself worked, if anybody from Disney was like, “Yeah, ‘icy patch,’ people are gonna love that. If you know, you know.”

Beth: Well, thank you so much for joining me today for this interesting adventure!

Is Muppets makeup something we really need? Of course not. Can anyone tell it’s Muppet-themed once it’s out of the container and onto your body? Nope. Is it something fans want anyway, just because? Absolutely! Loud, colorful, and impractical are core Muppet values.

In the grand scheme of Muppet merchandise, we’re generally fans of anything that keeps the Muppets relevant in the wider cultural awareness (so it’s not just our little corner of the internet trying to figure out how to 3D print a Jacob Marley door-knocker). And if sparkly makeup is your thing, we say, go forth and get (festively) weird!

Click here to paint your face on the ToughPigs forum!

by Beth Cook and Julia Gaskill 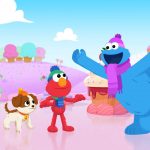