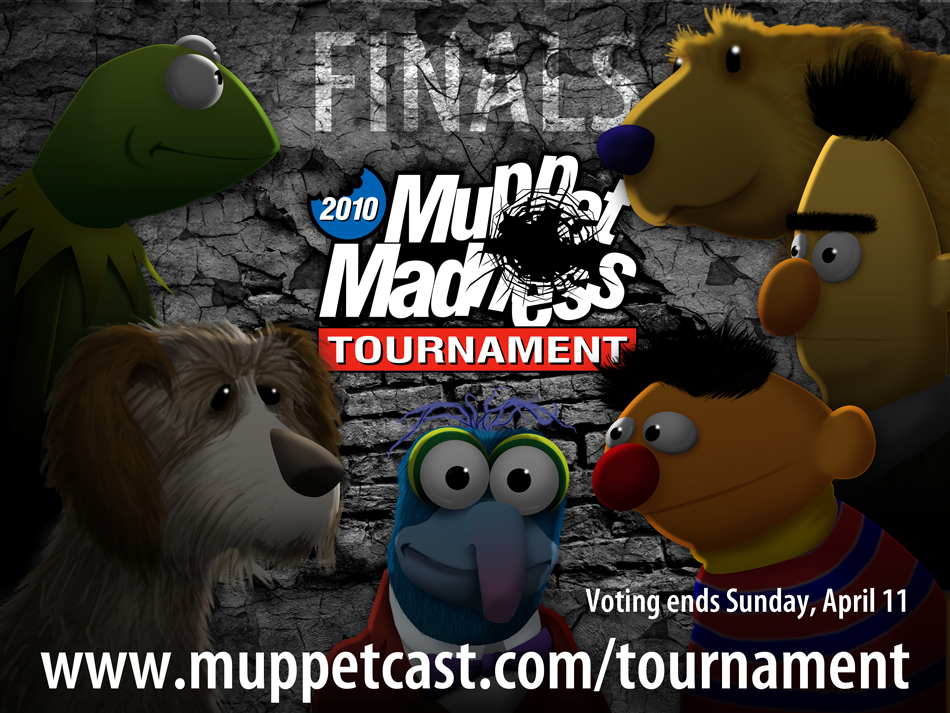 After weeks of debating, voting, and eliminating, 32 of your favorite Muppet characters have been whittled down to 5. Just as Charles Darwin predicted, the fittest Muppets prevailed while the weaker ones perished. The competition has been fierce and much felt has been spilled over the battle to decide who will take home the Muppet Madness trophy. (Note: the trophy is metaphorical. Don’t tell Gonzo.)

But before we ponder the final five, let’s take a peek-a-roo at last week’s head-to-heads:

The result of this race shouldn’t have surprised anyone. Kermit’s been the favorite to win since day one. But I had hoped that Fozzie could rally his fan base to give Kermit a run for his money. Unfortunately, this was the only contest of the entire round that was over before it began. Better luck next year, Fozzie.

This was one exciting race to follow. Cookie Monster took an early lead through most of the week. But then a little past the halfway mark, the Bert & Ernie fans made a triumphant return to claim victory and kick the furry, blue guy on his cookie-eating keister.

In yet another way-too-close contest, Sprocket fans voted in their favorite dog, while Wembley fans wembled just a little too much. Just imagine, if they hadn’t wembled, they might have been able to advance Wembley! But if they didn’t wemble, then maybe they wouldn’t be such big Wembley fans to begin with! This conversation is making my head hurt.

Just like the previous contenders, the Bear/Skeeter match was too-close-to-call for most of the week. Skeeter pulled ahead early on, but Bear dethroned her with just enough time to spare by the end of the week. Some people blame the legions of Bear fans who rallied at the last minute, but I like to think that the “Skeeter is not a Muppet” campaign had a lot to do with the pull-from-behind victory.

In our Resurrection Round, Gonzo kept a healthy lead throughout most of the week, which is not surprising since we had him going up against the Kermit Powerhouse way back in round 1. So I’m pleased that he’s getting a second chance at the championship, but I feel bad for every other character who had to lose a second time in so many weeks.

And there you have it! Your Final Five are Kermit the Frog, Bert & Ernie, Sprocket, Bear, and Gonzo! And yes, we realize that there are six characters in the Final Five. Will Kermit make our expectations come true? Will Bear prove that he can stand up against the titans? Will Bert & Ernie take advantage of their strength in numbers?

Be sure to vote and keep on voting every six hours on the tournament website!

Thanks to Dave Hulteen for the amazing image at the top of the page!

Click here to choose your favorite child on the ToughPigs forum!