Do you feel the electricity in the air?  Do you smell something burning?  It’s all because Round One of the 2012 Muppet Madness Tournament is over, and Round Two has begun!  That means it’s time to take a look back at the winners, and a look forward to Round Two! 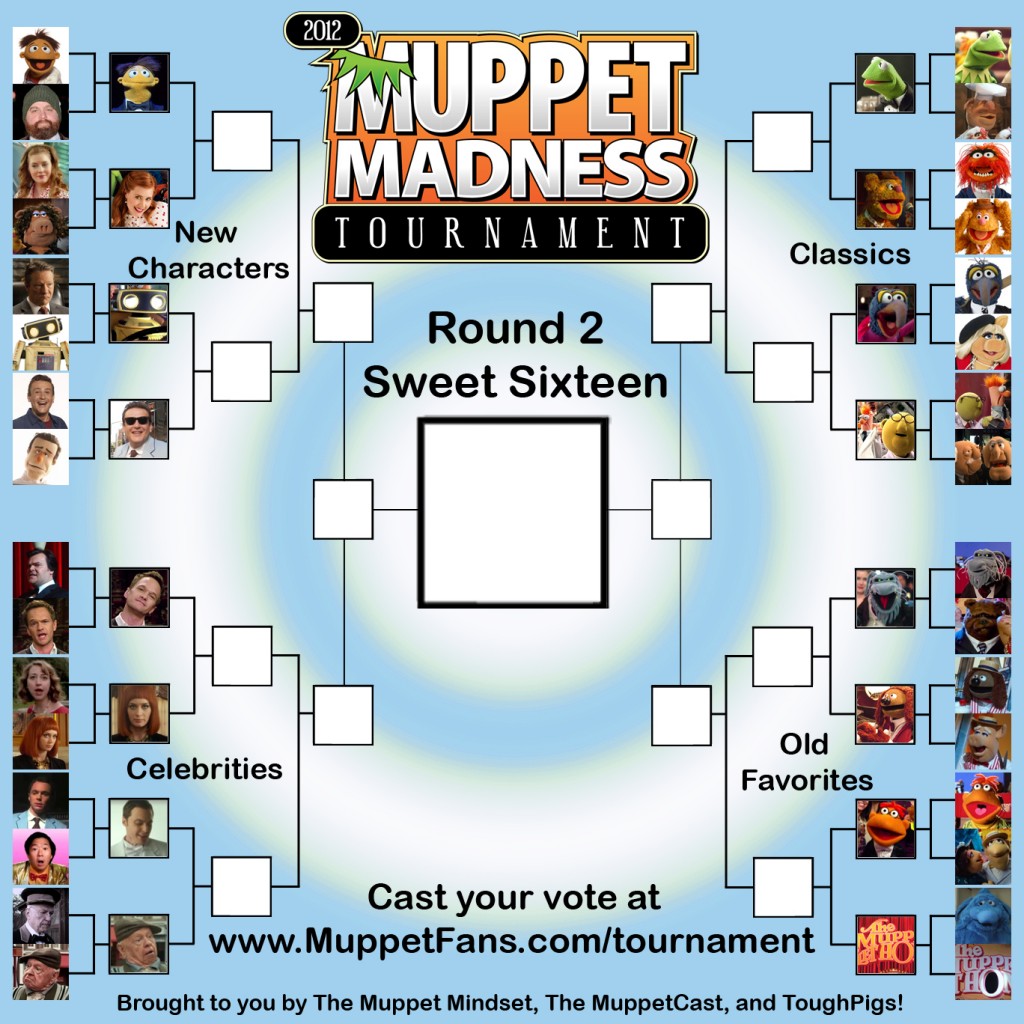 And there just a few that actually surprised me.  Mary, who is not a Muppet, managed to beat Miss Poogy, who is a Muppet (68% to 32%). Although I was voting for Fozzie over Animal, I thought it was likely that Animal would win the casual fan vote, but Fozzie won 56% to 44%.  And considering how much great stuff Piggy gets to do in The Muppets, I didn’t expect Gonzo to beat her by such a large margin (71% to 29%).

But that’s an interesting question in this tournament… Many of these characters are beloved favorites who have been around for years, but this is a Muppets-specific lineup.  So when we vote for these characters, should we vote based on their performance in the new film, or should we vote based on their entire careers?  That’s something to keep in mind as we look ahead to Round Two…

Okay, so that question is completely irrelevant here.  Walter and Mary are both brand-new characters.  Walter is the guy the audience identifies with, the earnest fellow who saves the Muppets in more ways than one.  Mary is the extremely charming, infinitely patient and supportive girl next door, who does a Charlie Chaplin tribute with a dinner roll.  But fans are already rooting for Walter to return in the next Muppet movie, while nobody’s buying Mary dolls at their local Disney Store.  Walter is going to go far in this tournament, so his victory over Mary is a sure thing.

I love 80s Robot.  It’s such an odd idea, and he really doesn’t add anything to the movie’s story, but he has several funny moments, and he serves Tab.  Gary never once serves Tab, but he’s Walter’s best friend, he has two great musical numbers, and he’s played by Jason Segel, the big, wonderful nerd responsible for getting the movie off the ground in the first place.  I think that will lead most people to vote for Gary. I’ll still vote for 80s Robot, though.  He’s totally tubular.

Emily Blunt played her cameo role flawlessly, but Neil Patrick Harris is one of the most popular people in the universe.  So assuming people vote for the actor first and the Muppets role second, NPH will W-I-N.

Hey, did you know Mickey Rooney was 53 years old when Jim Parsons was born? That’s a fun fact, eh?  Here’s another fun fact: Mickey Rooney has no chance of beating the guy who got the single biggest laugh in the movie.

Dave Goelz vs. Steve Whitmire and Dave Goelz.  All of these guys were underutilized in the movie, so I think this one is going to go to the character who’s most popular with the casual fans, and that’s Beaker, who will bring his boss along for the ride to Round Three.

It’s so great that we even have a reason to include Uncle Deadly in this tournament.  But even if Rowlf weren’t one of the fans’ favorite Muppets ever, he would win this matchup for making the most of his screen time. And for that nifty hat he wears at the end.

I love Thog, of course, but I’m really happy that Jerry Nelson’s Voice made it past the first round of votes.  And for those who claimed that he’s not a character: He’s totally a character.  It’s the Muppet Show announcer coming back to work on the Telethon along with all the other Muppets.  Still, Scooter made a triumphant return to his old stage manager gig, and he’s been in the news recently for his speech at the TED Conference.  Scooter will take this one.

Now, what are you waiting for? Go to MuppetFans.com/Tournament and place your votes today!  And the day after that, and the day after that… You can vote once every 24 hours until the round ends on Friday, March 23! And don’t forget the tournament is on Facebook and @muppettourney on Twitter!

Thanks to Tough Pigs’ own Joe Hennes for the cool images!  Click here to engage in heated debates about the tournament on the Tough Pigs forum!

Muppet Madness Tournament 2012: Round One!