Can you believe Round 3 of the Muppet Madness Tournament is already over? It seems like just yesterday that we were wondering which blue Frank Oz-performed monster would be more popular, and now here we are.

There were no major surprises in Round 3… As we’ve been saying in our tournament rundown discussions with Steve Swanson on the MuppetCast, people seem to be taking the “Variant” concept to heart, so whereas plain ol’ Cookie Monster might have stood a chance against regular Grover, Alistair Cookie was easily defeated by the world’s cutest superhero, Super Grover, 63% to 37%. In the Animals bracket, Rizzo the Rat proved to be more popular than an entire species, beating out the Muppet Penguins with 65% of the vote to their 35%. See if they invite him to their next Christmas Eve skating party! In the Creatures bracket, Snuffy was the sentimental favorite, scoring 56% of the vote over the 44% of comedy sensation Mahna Mahna. And finally, Statler and Waldorf earned an impressive 72% of the vote over Scooter’s 28%. Which is okay, because his uncle owns the theater, so he can probably arrange for their seats to become Obstructed View. Except they would probably prefer that. Hmm…

And now the Round 4 matchups! This is an exciting juncture in the tournament, because for the first time characters are competing outside their original brackets. First up we have Super Grover vs. Mr. Snuffleupagus.

They’re both from Sesame Street, but I don’t think I’ve ever seen them interact, unless I’m forgetting something obvious which somebody on Facebook will tell me about. On the one hand, Super Grover is an extremely funny character whose attempts at superheroics have been thrilling fans for years, right up to the current Super Grover 2.0 segment. On the other hand, Snuffy is just a really nice guy, a loyal friend to Big Bird, and he once sang a blues song with Ernie.

The Favorite: Super Grover. I won’t be surprised if Super Grover takes the whole tournament (His Super Mommy will be so proud!), whereas Snuffy’s victories thus far have been by lesser margins.

Our next matchup is two characters from The Muppet Show family of characters: Rizzo vs. Statler & Waldorf.

We’ve had a few complaints about the fact that Statler and Waldorf are two characters, and we’re ganging them up against a single character at a time. But come on, they’re Statler and Waldorf. They go together. You could no sooner separate them that you could separate Gilbert and Sullivan… and I think those guys went to college with Statler and Waldorf. Anyway, Rizzo has a lot of fans out there, especially considering he’s vermin, but the grumpy old men are some of the most popular Muppet characters around, particularly with the casual fans.

The Favorite: Statler and Waldorf.

And that’s it! Wow, that was quick. Now that you’ve finished reading this thing, head over to the Muppet Madness Tournament page and place your votes! Voting will be open until midnight on March 31, and get this — you can now vote every four hours! Get to it! 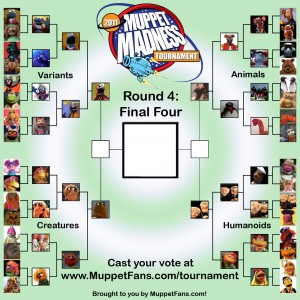 Click here to compare rats to old men on the Tough Pigs forum!