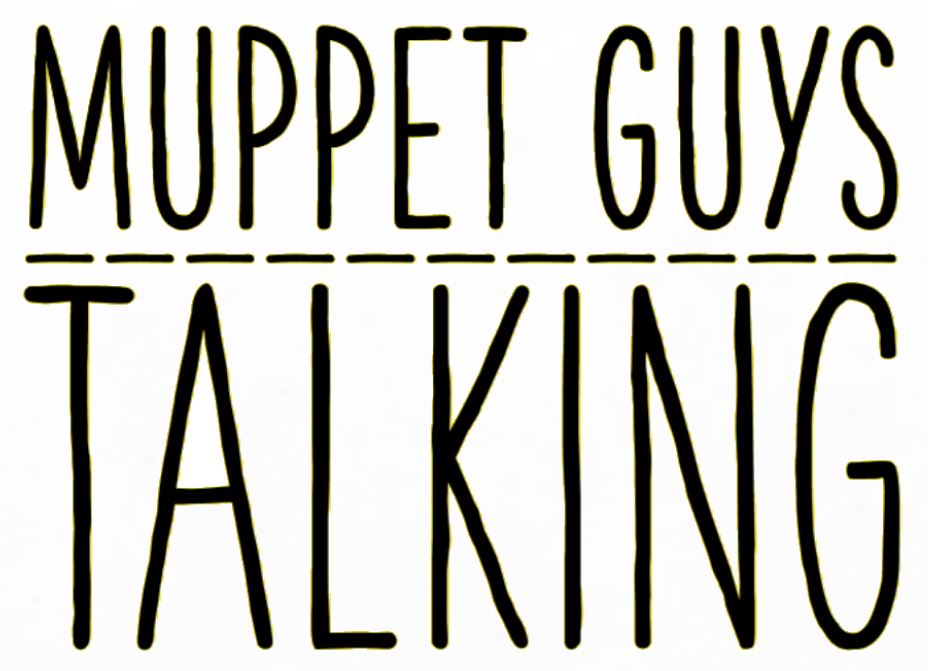 What if there were a sweepstakes for Muppet fans, and the grand prize was the chance to sit in a room and listen to five of the most prominent Muppet performers talk about their work for an hour? If you won, you’d just get to hang out and observe as your personal heroes chatted, reminisced, waxed philosophical and teased each other.

Well, congratulations. All of us have won that sweepstakes, and the prize is a new documentary called Muppet Guys Talking. 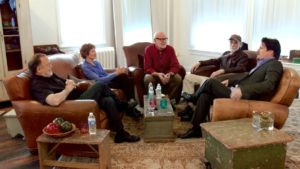 The documentary, directed by Frank Oz and produced by Frank with Victoria Labalme, is not flashy or fancy. It’s just Frank, Jerry Nelson, Dave Goelz, Fran Brill and Bill Barretta sitting on comfy-looking chairs and couches, having a pleasant conversation. If anyone approaches the film hoping to see lots of clips from classic Muppet productions, they’ll be disappointed — occasionally we’ll see a few seconds of footage, but not much of it. There are also a few moments when the film presents us with a visual aid to help us picture what they’re describing, or a cut to an individual interview with one of the five. But for the most part, Muppet Guys Talking is just… Muppet guys talking.

Going in, I wondered whether the film would contain many morsels of Stuff We Didn’t Know Before. I knew I would enjoy seeing five Muppet performers discussing their craft, but I was prepared for the possibility that the topics would be more of a Muppets 101 – which performer plays which characters, how the puppets work, and so on – than a collection of juicy inside tidbits. It seemed one of Frank’s goals for the film was simply to introduce the performers to the general audience who don’t know them as well as their characters. 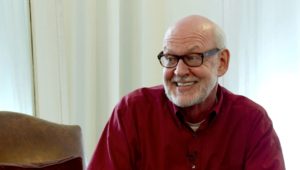 I needn’t have worried. There’s enough basic information and exposition that any pop culture fans with an interest in Muppets should appreciate the film, but there’s also lots of great stuff that thrilled me as a Muppet nerd.  Frank explains the inspiration for Grover, Dave recounts his earliest encounters with his future colleagues, Fran talks about being a woman surrounded by male puppeteers, Jerry recalls how he first became aware of the Muppets. It’s all fascinating, whether you’re a huge fan or a regular-sized one.

Frank Oz has said they shot about nine hours of footage, so it’s darn near miraculous that they were able to cut it down to just 65 minutes. Obviously, 65 minutes won’t be long enough for most Muppet fans, but the 65 minutes we get moves along at just the right pace. At one point, we even get to see them take their coffee break, which is fun to observe and also allows to get an even more candid, informal look at the Muppet Guys for just a minute before diving back into the really insightful stuff. 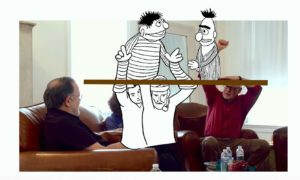 The conversation touches on a variety of topics, but it always tends to come back around to one of four distinct but related themes. The first is where characters come from. The performers talk about the origins of their best-known characters, how they came to be assigned to those characters, and how they developed the characters using pieces of their own personalities. Frank Oz obviously loves this aspect of Muppet performing, and the film does a great job at highlighting a variety of Muppets.

The second theme is the general hazards of puppetry. The Muppet Guys go through a lot to make their characters seem real, and they all have a lot of stories about the most dangerous, exhausting, or just plain strange moments in their careers of wiggling dolls. Some of these stories will be familiar to longtime fans, but it’s great to see the performers reacting to their colleagues’ memories.

The third theme is Jim Henson. Who he was, what it was like working with him, and how his personality left a lasting impression on the Muppet legacy and everyone who knew him. Apparently Jim was a pretty swell fellow, and “working” for him never felt as much like work as it did play. As fans, we’re always looking to know Jim a little bit better, and the film brings us another step closer. 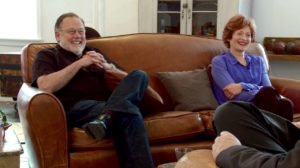 The playful atmosphere encouraged by Jim ties directly into the fourth theme: Camaraderie. We like to think of the Muppet world as a non-stop, decades-long party, and the film does nothing to dispel that notion. As the performers talk and laugh – and laugh some more, it’s so clear that Bill Barretta is a big Jerry Nelson fan, and Frank Oz is a big Fran Brill fan, and so on. The Muppet Guys love working together, they love creating great work together, and they just plain love each other.

That may be the primary thing viewers will take away from Muppet Guys Talking: These wonderful, talented people who helped make the productions that have entertained us, taught us, and touched us for our entire lives? They had just as much fun making it all as we did watching it. And with Muppet Guys Talking, we get the privilege of watching them as themselves.

Head to MuppetGuysTalking.com on March 16 to see the documentary! Click here to take a candid, informal coffee break on the Tough Pigs forum! 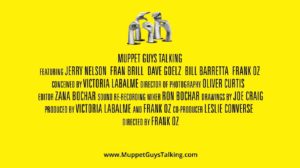