Click here for the runners-up! And now, the winners!

“When I was little, I was addicted to the Muppets. I had Muppet everything pretty much. But there were a few Muppet things that I really wanted and couldn’t get…

“When I went to kindergarten in 1980 there was a girl who had the big tub of the Muppet Movie View-Master reels. One day we were out on the playground, and she left it there. So I took it. My mother found out and she wasn’t very happy. I don’t know why I even told her in the first place. Anyway, she made me take it back to school and give it back. But I was smarter than that, I kept about 3 or 4 of them and gave back the rest.
“But my Muppet kleptomaniac issues didn’t stop there. Over the years in elementary school, I obtained two lunchboxes, The Muppet Show Book, and all the magazines from the library that had articles about the Muppets, including the Dynamite Magazine which featured The Great Muppet Caper. I also got a few Fraggle things that the teachers had.

“Yes, I suppose I was an evil child, but I don’t think people really miss these things. I was the only one who ever took The Muppet Show Book out of the library for those five years anyway.

“I later grew out of stealing Muppet stuff… but at college, I met my good friend Debbie. One day we were walking in a parking lot on campus, and we passed a car that had the McDonald’s Kermit toy from Treasure Island on the dashboard. I told Debbie that I didn’t have one and that I wanted it. She walked over to the car, opened the door, and took it for me.

“One year later, Debbie and I transferred to another college. We were taking a theater class with a woman that we all hated. But there was one thing about her that I liked, and that was her World of the Dark Crystal book. I knew one day that it would be mine. One night, Debbie was off doing a production of Our Town, and I was in my dorm kinda depressed because that teacher wanted to fail me in our puppetry class. Anyway, Debbie was working in the costume shop where the book was, and she knew I really wanted it. So when she came back from the show that night, she had a surprise for me. Yes, it was the book.

“So does this make me a bad person? I don’t think so, at least I’m still enjoying these hot items today and giving them the love they deserve.”

The thing that makes this story a prize-winner for me is that Dan expresses absolutely no remorse for his crimes. He isn’t sorry about what he did at all, and I have to respect that kind of amoral ruthlessness. Dan, you’re excellent, and you win the 25th Anniversary mini-lunchbox… but if you ever come over to my house, I’m counting the spoons when you leave.

“It doesn’t take much for me to become obsessed. And apparently it takes even less for my then-friend Cathy, if you consider that she’s not even a Muppet fan. She got right on board with the pursuit of small objects… right to the end of our friendship!

“I don’t buy sugar cereal. I was never allowed to eat it as a child, and the habit just sort of stuck. Nevertheless, I do often gaze at the pretty boxes in the cereal aisle. The bright colors and snazzy designs are oddly attractive.

“My weekly perusal of sugar cereal is what started the whole thing. Looking back, it was all over the minute I spied that tiny Elmo mini-bean cheerfully peering at me from the front of the box. I knew right then. Further inspection of the box revealed the magic number… 24. There were 24 Sesame Street mini-beans and I had to have them ALL.

“Now, I guess I better explain my friendship with Cathy. It was a fairly typical suburban mom sort of thing. We probably would never have been friends except that we were both stay-at-home mothers of small children. Bored, sometimes lonely, we needed someone to talk to about Target and baby poop. As a result, we chatted on the phone constantly, and shared all the minutia of daily life. Naturally, I brought my discovery of the mini-beans to her attention.

“She understood right away. Happily, it seemed that Cathy was harboring a small army’s worth of Kellogg’s cereal in her basement. We set to work immediately. Even after opening the hundred dollars worth of cereal we already had, we still didn’t have a complete set, much less two! It seemed clear. We would still have to obtain six different order forms and 24 UPC’s each in order to send away for complete collections of the beans. And it was summer… the promotion would be over soon. We had to work quickly.

“Between the two of us we combed all the local stores. Cathy shoveled that cereal into her three kids at every meal. Still, we were coming up short. Some beans were so easy to find, and others were practically impossible. Things started to get tense. Sure, I had Grover, but she had Herry Monster. And as the search went on, it became clear that Cathy was unwilling to trade. So what if she had five Tellys? What if she lost four of them? No, she would not trade. There would be no reciprocity in mini-bean land.

“As the summer went on, the hunt continued. By then, though, it seemed like more of a race. There was a certain taunt in Cathy’s voice when she announced her latest acquisition. And to add insult to injury, she had a knack for finding them at yard sales… that we often attended together, racing from our cars to the tables. She always had the upper hand since she (unwisely, I thought) left her kids in the car, while I always took mine with me. Once, she waited until we got to the next sale to announce that she had picked up Ernie for a dime down the street. To my horror, I realized that my partner in mini-beans had become my enemy. We had to part ways.

“By the time I obtained enough UPCs and the correct order forms to send away for my complete set of mini-beans, my friendship with Cathy had cooled considerably. Once the true nature of our relationship had been revealed through bean collecting, it seemed there wasn’t much left to salvage. Sure, we both had kids, but so do hundreds of other women in the neighborhood, and maybe they wouldn’t be so stingy with Betty Lou.

“In the end, it was a bittersweet day when the mini-beans started arriving in the mail. Sure, I had a complete collection now, but who would I share the news with? My new non-obsessive pals could never know the truth behind those huge Tupperware containers filled with cereal in my kitchen. No, it was better to just move on. As I lined up my mini-beans for the photo, I felt more mature and in control than I had all summer.

“And what became of Cathy? We run into one another from time to time. the conversation is easy, but never progresses to a lunch date. Occasionally, I still see her kids trapped in the car at yard sales. I resist the urge to inquire about her latest finds. Why open old wounds? I did notice that she had another baby last year. I hope he likes cereal.”

Thank you, Jes! Your prize: The Kermit’s Swamp Years video, plus a recipe for Crispix party mix.

Mark wins the big prize for sending two really cute stories, complete with photos. The first picture is from 1980, showing Mark at age 10 with puppets that he made for a church puppet show of the Adam and Eve story. Mark is on the right, holding his home-made Janice replica, who played Eve — and “shamelessly bared her orange felt skin in a church!” — and a Bigfoot doll that played Adam. His friend Craig is holding the devil puppet, made from Janice’s scraps, and the serpent. Craig also performed the Tree bearing the Forbidden Fruit.

Mark continued making Muppet puppets all his life — including this really cute Robin puppet made in the mid-80’s — but the most amazing photo that he sent was for this story:

“Since Halloween is my birthday, it’s a special matter of pride to have a home-made costume every year, and the year I met my wife was no different. I built this Skeksis Garthim-Master out of car upholstery foam, two lower halves of plastic Easter eggs, some camel hair, and scrap material.

“Albalis (my wife) is from Panama, so she had never participated in a Halloween party, one of our first dates. Needless to say, when she saw me in my full-size Skeksis outfit swinging a giant sword, she was somewhat apprehensive! 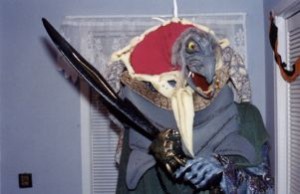 “She asked me, ‘Are you from the earth?’… ‘No,’ I growled, ‘I’m from Montgomery.’
“If it was a test of our love-to-be, she passed with flying colors. She giggled with delight at my response. At my birthday dinner afterwards, I asked her to be my girlfriend. And, despite my obvious obsession with all things Muppet, she agreed. Seven months later, we were married, and we remain happily so to this day.”

So there you have it. Mark wins the grand prize — the first two volumes from the Best of the Muppet Show videos. Besides being obsessed with the Muppets, Mark has a video animation production company called MarkToons Animation; go check out his site!

Thanks again to everybody who entered; this was really fun, so I’ll be doing more contests like this in the future. Keep an eye out for more chances to win cheap prizes and bring shame to your family!