The following article was written by Whitney Grace.  If you missed her previous installments of “The World of Muppet Crap,” click here to read about officially licensed Skeksis-inspired clothing, Muppet-themed undergarments, and an incredibly obscure Muppet kangaroo.  Thanks for your dedication to weird Muppet stuff, Whitney!

Welcome to The Wonderful World of Muppet Crap! 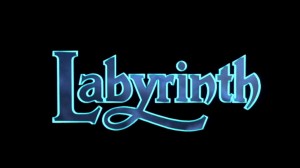 On a dark and stormy night (don’t judge me for using that line, because it happens to be true) in 1998, I was busy channel surfing for something to watch. On demand didn’t exist and pay-per-view was way too expensive. There was very little on to suit my discerning tastes of cartoons, anime, and more cartoons, but I was hungry for something new and good that would spur my imagination. A movie was on the Disney channel and fulfilling my nasty habit about coming into a movie twenty minutes late, I almost clicked back to Nickelodeon. Then I saw little creatures scurrying across the screen and taunting a teenage girl. What intrigued me were the creatures. What were they and who had made these grotesque things?

A musical number about magic and the heroine’s attempts to understand her predicament entranced me. I had never seen anything like it before and had no idea that movies like this even existed. Lightning flashed and thunder clapped as I burrowed into the couch and put the remote down.

While Sarah fell into the oubliette, I feel into Labyrinth fandom. Tumblr, DeviantArt, and other websites that draw fandoms by the drove didn’t exist. To live out obsessions in the early Internet days, fans had to rely on trusty search engines, Webrings, link lists, Web groups, and personal websites. The best websites were character shrines made by individuals and they housed everything from character profiles, fanfiction, fan art, and show information. These Websites ranged from poorly constructed HTML to sites that could pass as official sources. 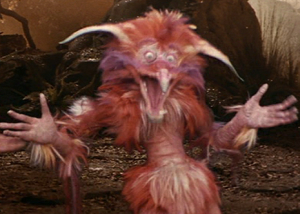 Labyrinth had its own large share of fansites and mostly had the same items as listed. I do remember one made a click through Labyrinth game. I spent hours everyday trekking through the labyrinth before the clock struck 13 o’clock. That’s a metaphor for when my allotted Internet time on the 56K modem expired. (Later, when I got Wi-Fi, I had to be pried off with a shovel and tied to a tree outside to get vitamin D and recreation. I don’t know how my parents were thinking I’d get exercise tied to a tree, but the cool thing was that it was a peach tree, so I ate peaches using my feet and pretended I was a Fiery watching Sarah get hallucinogenic on her own peach. Fieries are immune to the effects of Underground produce, because they’re already trippin’ on their own good mood. Didn’t you know that?)

I was desperate for anything Labyrinth and even in my more youthful days I ventured onto eBay to find merchandise I could tangibly have to feed my fandom and I could afford on my spare allowance. At that time, Henson hadn’t licensed Labyrinth for new merchandise. Now you can find new stuff, but then I was still surfing for fan-made crap, those creepy movie posters, and stuff from the eighties. I hated the authentic 1980s merchandise, because the graphics never had the same feeling as the movie. 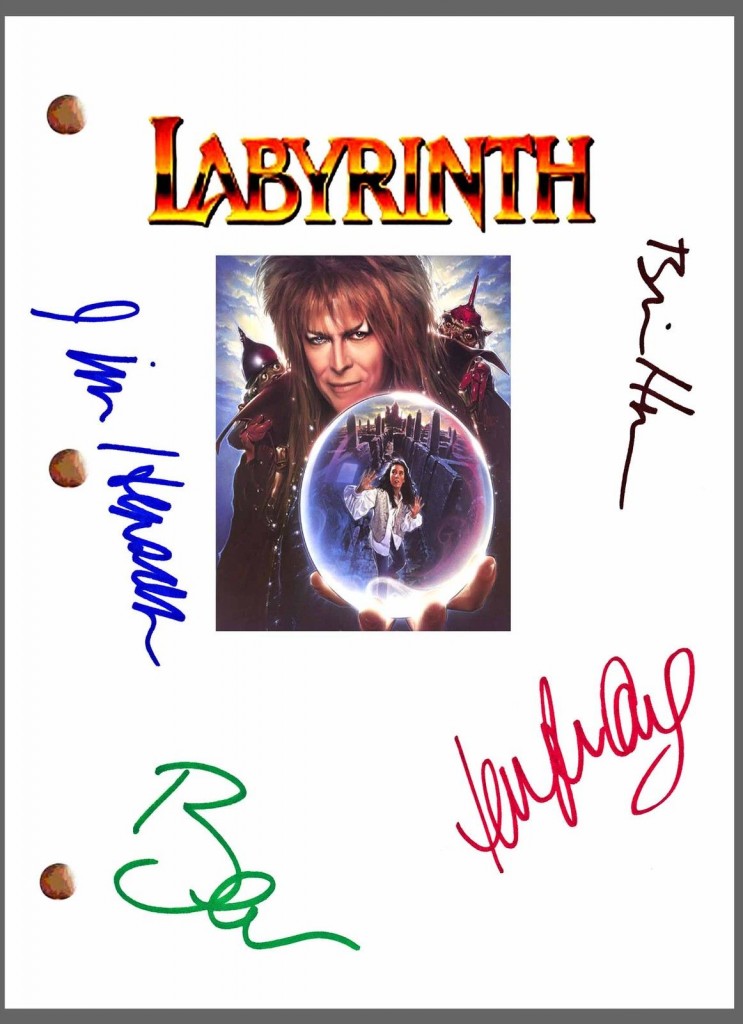 What did suck me in almost like falling into the Bog of Eternal Stench was an auction for a Labyrinth script signed by the film’s cast. It was only $40! I could afford it if I forewent my Sailor Moon and Ranma ½ comic books for three months. So I watched the auction for days, praying to the auction and luck gods to not allow anyone to bid. Into the last twenty-four hours, only one person had bid. Even at my tender years, I had learned the finer points of eBay and I was a main contender. In the last hour, I bid and was the leader. Thirty minutes in I still was the highest bidder, but as the clock ticked down into the last fifteen minutes the war began.

Back and forth we shot our numbers armed with dollar signs. I raised it by a dollar, he raised it by five. As I got caught up in the excitement, I exhausted my savings and went into debt. At eighty dollars, I tapped out. I gave up. I laid down. I surrendered. The auction ended at over a hundred dollars. A few days later, I got a message from another seller telling about another signed Labyrinth scripts. I was still suffering from auction PTSD, so I couldn’t bear the thought of going through the turmoil again. So I let the second signed Labyrinth script go.

Over the years, I’ve seen more signed scripts and recently I noticed that the number of Labyrinth scripts has multiplied and the sellers never seem to run out.

How many scripts did Jim Henson, Jennifer Connelly, David Bowie, and George Lucas sit down and sign? Did they spend a whole day locked in a room together and signed dot matrix copies? Did they think to themselves: “Someone will make a killing on these in twenty years when someone invents a way to sell them en masse!”  And where did they find the time to do it? Were they tied to chairs with Sharpies strapped to their hands, forced to sign thousands and thousands of copies?

These scenarios are as likely as seeing a Labyrinth 2 movie based off the comics a few years ago.

What’s the truth? Let’s think about this using our critical thinking skills.

Are these real? Possibly.

Are they copies? Most likely.

Are these photocopies of real scripts? Maybe. 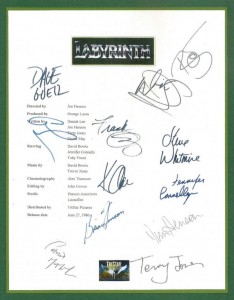 None of this can be confirmed, except for the part about breaking the law, without an actual copy. If I ever did get a copy, I’d head to Las Vegas and the Gold and Silver Pawn Shop from Pawn Stars. I’d ask for a ridiculous amount like $100,000, and then they’d call in an autograph authentication person who could use his expertise and nifty tools.

But unless someone is willing to buy me a copy and a ticket to Vegas, or pay for a professional authenticator, I’m going to pass.

So what am I going to do instead to satisfy my Labyrinth craving?

Nothing much else to do than Chilly Down. (You knew that was coming.)

Additional Note: It’s come to my Labyrinth-obsessed attention that a few of Tough Pigs’ beloved readers have purchased copies of above said scripts.  The verdict?  They are photocopied, but there is something interesting about them for any Labyrinth fan.  The scripts are early drafts of the movie!  They include the original ending and other story tidbits about the Underground.  So it might be worth spending a little dough on the copies to see the story changes.  OR, the kind, generous, lovely, sensational, sublime, and magnificent Tough Pigs readers who have copies could share with us what they say.