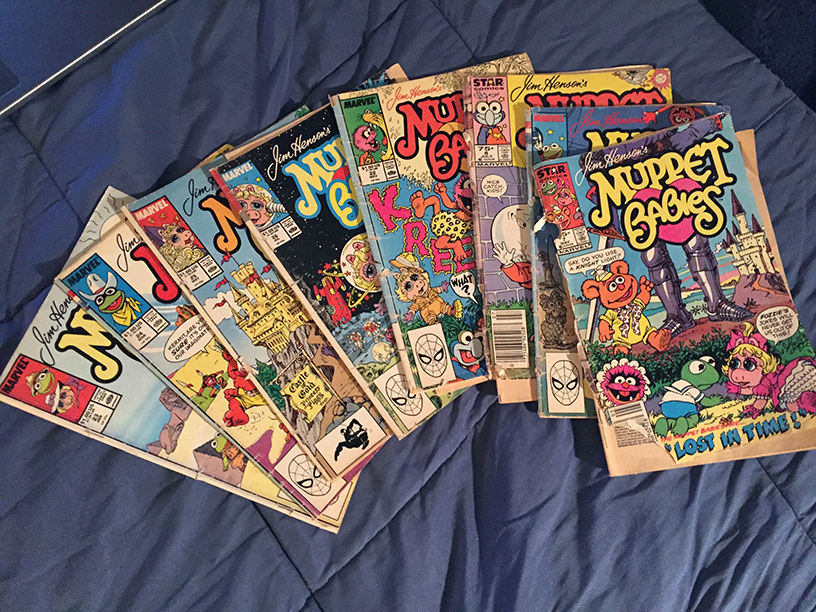 With the new (and fairly entertaining) Muppet Babies reboot now here, it’s no surprise that everyone’s been talking about their Muppet Babies nostalgia. That TV show, which used old footage in clever ways! That theme song, which has been stuck in my head since 1993 or so! Those Happy Meal toys, which… existed!

But I’ve been very surprised that no one has been talking about the Muppet Babies comic series, which was published by Marvel from 1985-1987 and briefly ran in reprints through Harvey Comics. 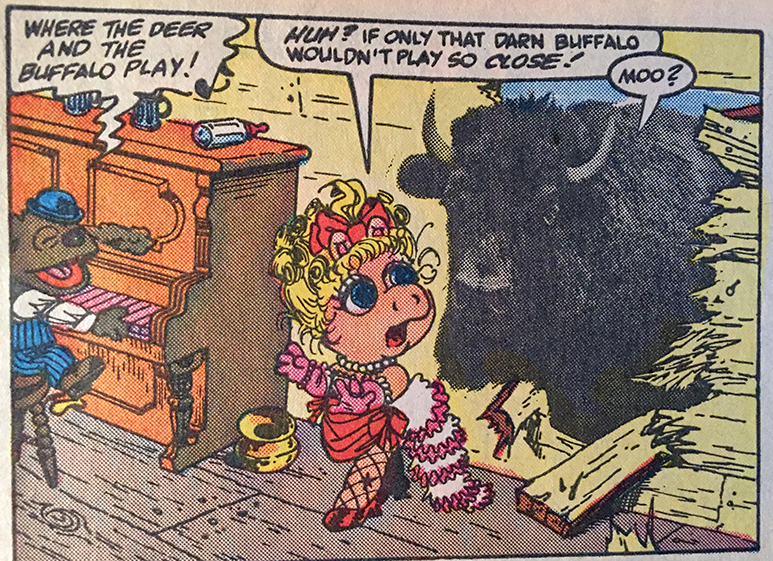 If you’ll allow me to be a little personal for a second, these comics were incredibly important to me as a kid. Y’see, I was born after most Muppet properties (including the original TV run of Muppet Babies) had ended, but my dad and older sister had collected some of these old issues. As a result, it’s probably largely because of these books that I’m a Muppet fan at all, and they certainly got me interested in comics as an art form.

Last year, Marvel re-released their run in a deluxe hardcover omnibus, which was not well-promoted and I haven’t picked up. (I will, I will, geez Marvel.) Other than that, though, nobody has spoken about these comics since, like, 1993 or so. Why not? Are they bad? Well, I hadn’t looked back at them in a very, very long time. So, after watching the first episode of the new Muppet Babies, I built up the courage to find my old Muppet Babies issues and read through them.

Well, in many ways, I’m happy to say they hold up. I mean, obviously, they hold up artistically. Most of the books feature art from Marie Severin, and she hits the style of the cartoons very well. The art is very kinetic, with a lot of cute motions and fun facial expressions. The dialogue isn’t as good, but that’s not the fault of regular series author Laura Hitchcock or any of the other authors, which happen to include at least one issue by Bill Prady of The Big Bang Theory and that much-beloved 2015 Muppets TV show. Instead, they’re just accurately hitting the tone of the original Muppet Babies, which admittedly is a little more annoying to me as an adult than it was when I caught reruns as a small child.

Look, they’re Marvel comics from the mid-80s, and sure, they aren’t The Demon Bear Saga or Walt Simonson’s Thor or anything, but there’s a level of quality I expect from any offshoot of that bullpen and I wasn’t disappointed here. 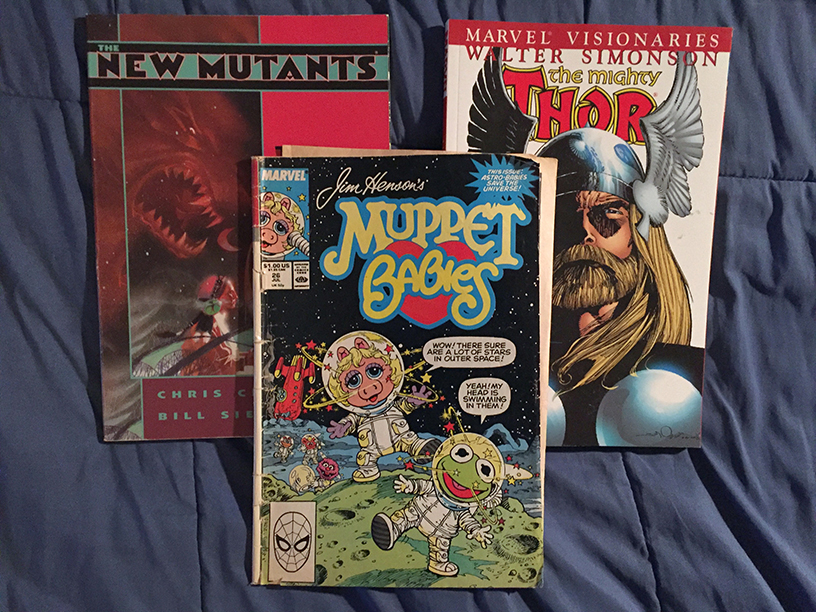 But what interests me so much about these comics is how weird they can get. The best issues are the ambitious ones, of which there are a surprisingly large amount. Take “The Secret of the Mummy’s Curse,” in which the Muppet Babies solve the riddle of a missing mummy. This issue tasks the readers with solving a variety of simple puzzles to help the Babies with their mission. It’s a simple idea, but I remember loving it when I was a kid (and clearly trying to pencil in the answers to help Scooter). 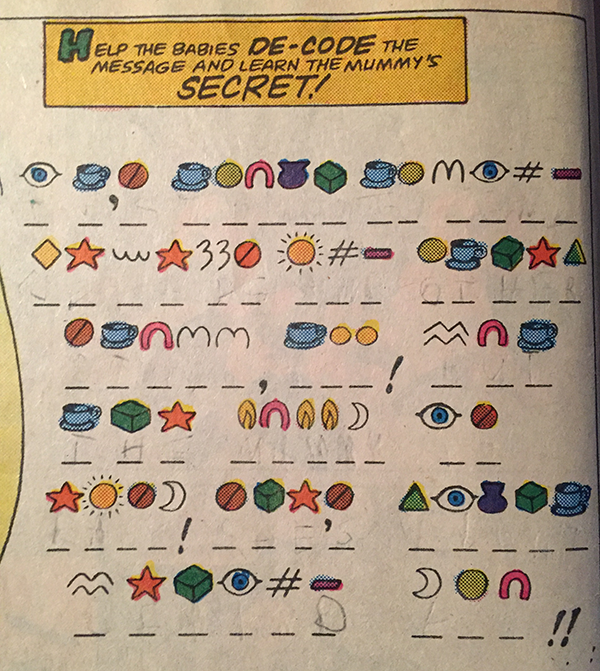 Another clever issue is “Lost in Time,” a double-issue where Fozzie leads the gang on a time-travel escapade, tracking the evolution of the phrase “Wocka Wocka” throughout history and revealing a particularly ridiculous Stone Age origin. 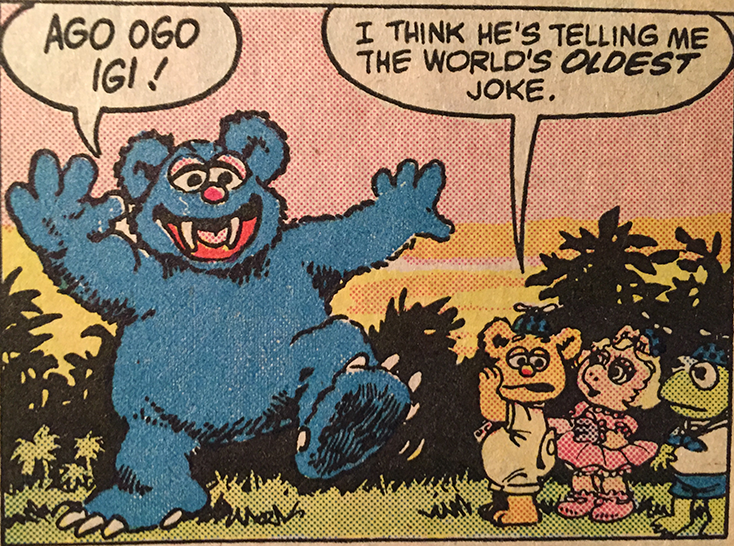 The best of all of them, however, is “The Magic Book.” This story, which I didn’t appreciate enough as a child, is about a magical spell Gonzo casts on the Muppet Babies that traps them in a comic book. The issue is wonderfully creative and meta, with a number of gags that take advantage of the comic book format. Check out the images below, where Animal moves speech balloons around to steal credit from Scooter and where the Babies grab a sound effect to save Gonzo. The story is very short but very tightly-plotted, and represents exactly what I love about this comic. 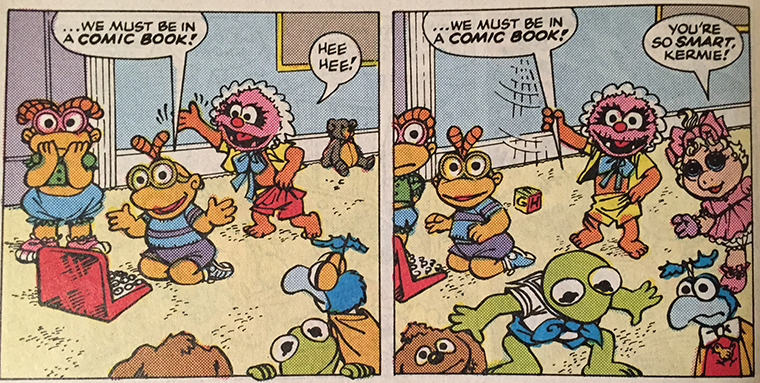 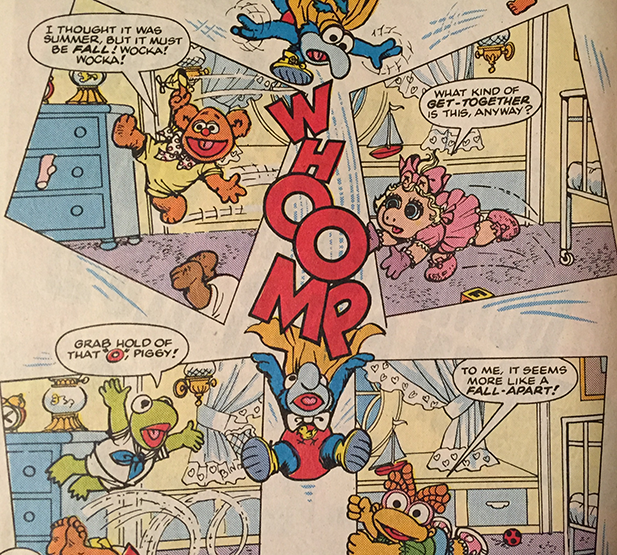 (Editor’s note: This Muppet Babies story was the focus of one of our classic ToughPigs Book Clubs way back in 2009!  Click here to read the whole thing and our ridiculous comments and observations.)

Y’see, the nice thing about Muppet Babies in general and these comics in particular is they let the Muppets do extremely high concept stuff. A full-length time-travel story would require the Muppet team to do a ton of work: it would be a massive investment of time and money. For the Muppet Babies comic, it was Issue 25, and they came back a month later to help a space alien win at pinball and Camilla quit her terrible office job. 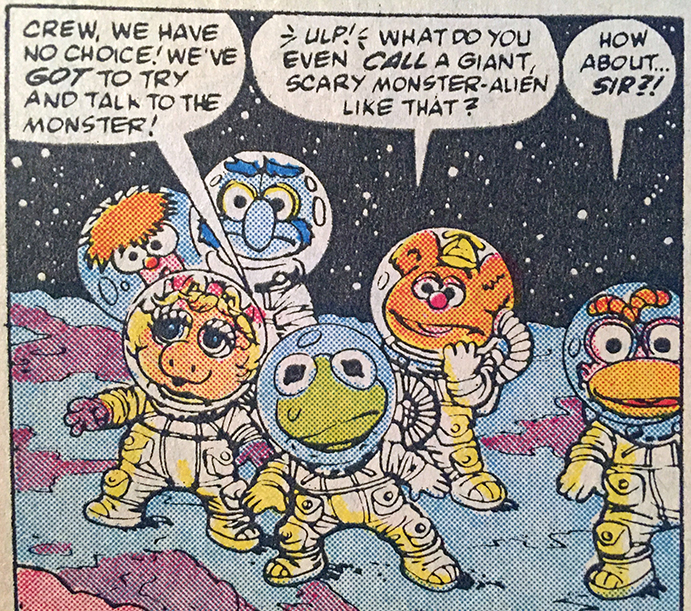 These kind of bizarre scenarios aren’t what I think of as the adult Muppets’ wheelhouse, but they absolutely could be. I mean, what’s keeping the adult Muppets from having these kind of comic adventures? Nothing. I’d love to see these kind of ideas revisited, and that’s the real takeaway here. Well, that and that the issue where the Muppet Babies catch a giant fish is a delight. Look for that one too. 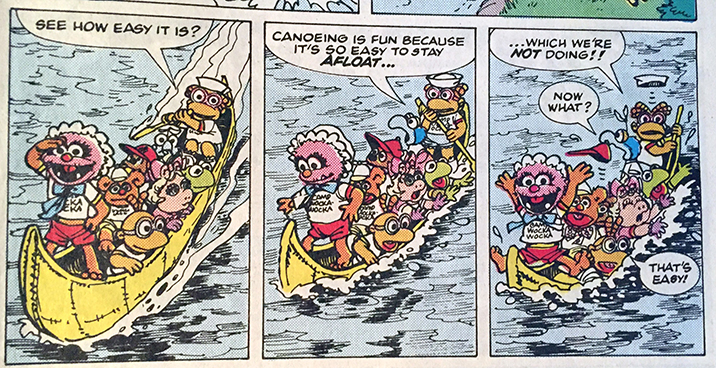 Click here to collide through the fourth wall on the ToughPigs forum!

Reminder: Muppet Babies Is Not For Grown-Ups