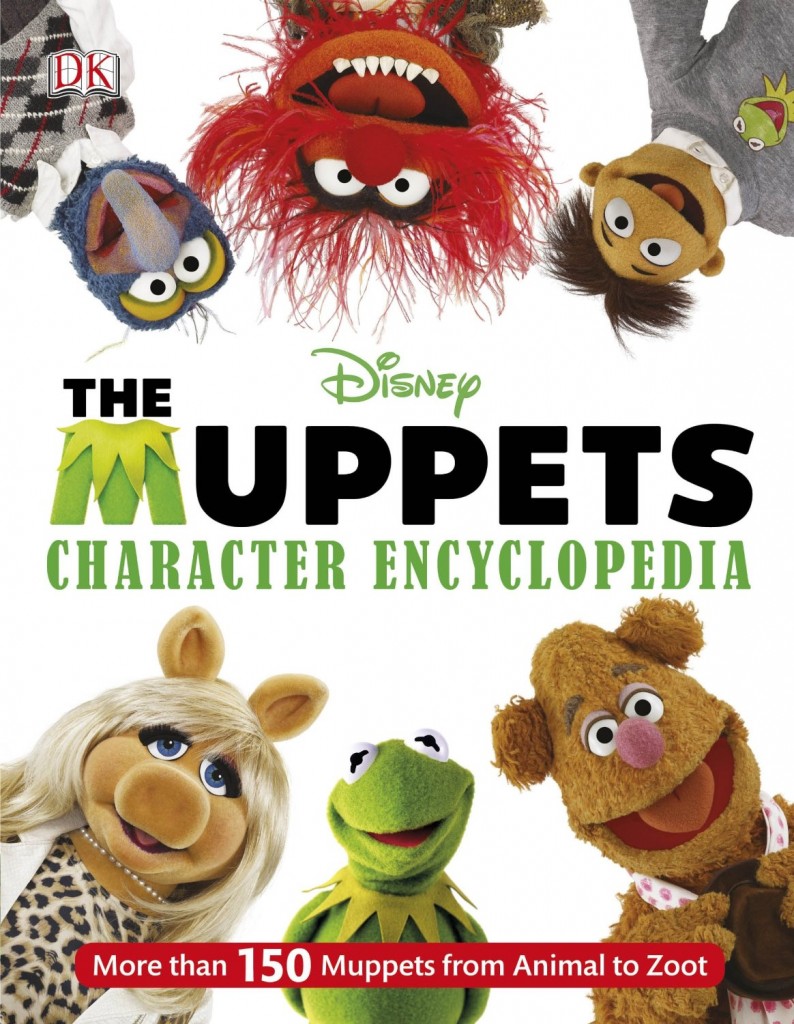 First of all, let me answer your biggest burning question about The Muppets Character Encyclopedia: Yes, the Talking Houses got their own entry.

The Muppets Character Encyclopedia is out now from DK Publishing, and it’s a good-looking book. It’s not quite as big as some of DK’s other books, like their Illustrated Guide to All the Toilets on the Death Star in Star Wars or whatever, but it’s bright and colorful and well-designed, and it’ll look just spiffy on a Muppet fan’s bookshelf, or in a university library, next to all the other essential reference books.

The book was written by veteran Muppet writer and Jim Henson Legacy president Craig Shemin, who knows a thing or two about Muppets.  The format is not what I’d call strictly encyclopedic, so those hoping for pages and pages of text with black and white line drawings are out of luck. Instead, for each entry, you have a description of the character, a handful of photos, and a few assorted notes. Here’s the one for Sweetums: 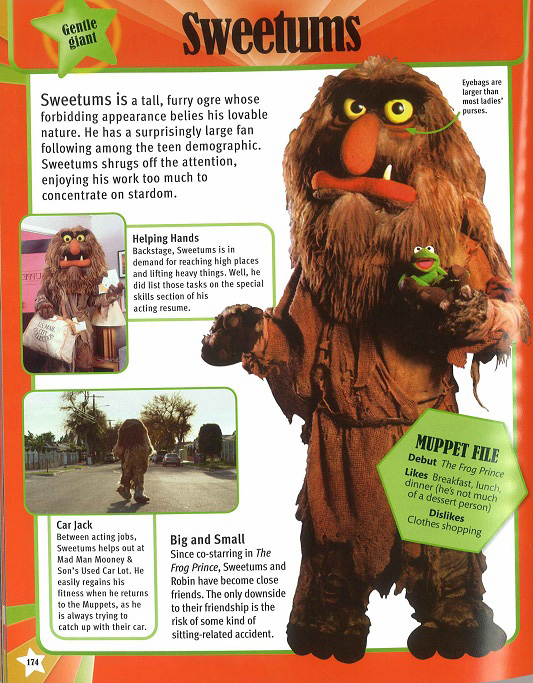 As a source of actual Muppet information, the Character Encyclopedia never reaches, nor does it aim for, the depth of Muppet Wiki.  Each character’s first appearance is listed, but there’s nothing about the design of the puppets and how they work, like the fact that Sweetums requires a puppeteer to get completely inside him.  Or the fact that Sweetums requires a puppeteer at all.  Instead, the book takes a completely “in-universe” approach to the Muppets, talking about each character as if he or she is a living, breathing performer who happens to work for Kermit the Frog.  So don’t get your hopes up for any new (or old) details about how they used to get Fozzie’s ears to wiggle, or how many feathers are on Fletcher Bird.

But that’s okay, because Muppet Wiki already exists to satisfy our need for pure, concentrated Muppet information.  Where the Encyclopedia succeeds is in serving up a combination of information and entertainment. In addition to the first appearance listing and a few more tidbits from Muppet history (e.g., Lew Zealand is known for throwing his fish, but he also once did an act with some singing fish), every page of this book is packed with jokes and silliness.  Take a look at the entry for the toothiest Muppet monster, Behemoth: 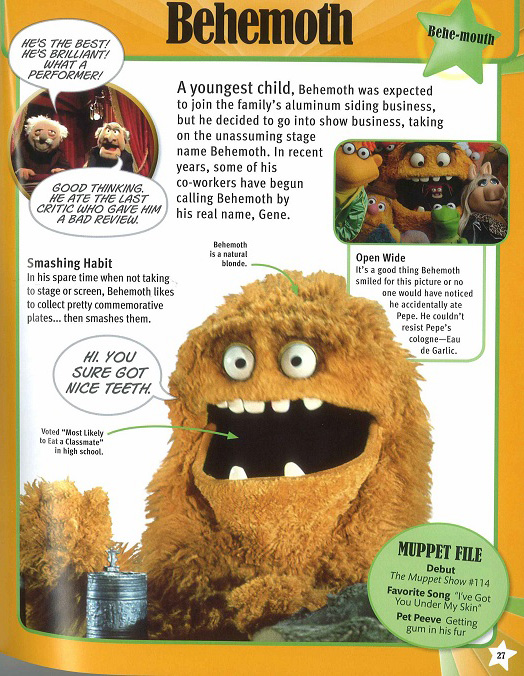 “Behe-mouth!”  “Most Likely to Eat a Classmate!” “Pretty commemorative plates!”  A Statler and Waldorf gag!  You get a lot of bang for your buck in this book.  And look, it even acknowledges the fact that the Muppets have been calling this monster “Gene” in recent appearances. In reality, this happened because Bill Barretta wanted to name a Muppet after his brother Gene, but Shemin manages to mention it without violating the book’s “the Muppets are real” style.

For a fan who’s intimately familiar with the characters, possibly the most fun part of reading The Muppets Character Encyclopedia is seeing how Shemin comes up with silly new backstories and where-are-they-nows for all the minor characters.  For example, before starting a band, the members of Geri and the Atrics lived at the Happy Heart Rest Home. Timmy Monster has retired from show business to open a bakery called Timmy’s Treats. And Miss Mousey is now teaching theater classes at a small college in Wisconsin (That one made me laugh out loud).

In some cases, the text even attempts to explain or fill in gaps in Muppet history.  The entry for George the Janitor confirms that George retired and Beauregard took over his job.  The entry for Jowls and the Muppets Tonight band tells us that the Electric Mayhem weren’t available to be the house band on that series because they were on tour. If you or I wrote these things on the internet, they would just be fanfic. But in an officially licensed book, they’re more like comic book retcons — but they’re just for fun, so we don’t have to take them too seriously or worry about them being negated by Gonzo punching a wall. 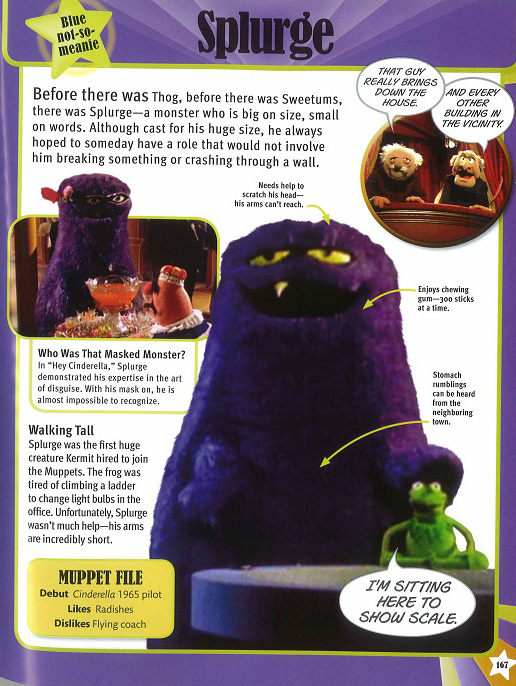 Of course Kermit and Miss Piggy and Fozzie and Gonzo are included, and they even get their own bonus spreads (like “Gonzo’s “) in addition to their basic entries.  But if you’re going to create an entire Muppet encyclopedia, it follows that there are going to be some lesser-known characters, and some of the Muppets here are pretty darn obscure.  Fleet Scribbler and Luncheon Counter Monster get their own pages.  I was surprised to see Howard Tubman, a pig best known for a series of Muppets Tonight sketches that never appeared in the US version of the show, and delighted to see that Splurge from Hey Cinderella! made the cut.

Kermit apologizes in the introduction to all the “cows, horses, lions, tigers, bears, and assorted unidentifiable creatures who couldn’t make it,” but there are a few curious choices as far as who’s here and who’s not.  Bean Bunny is here, so you might think that the main characters from the Muppet portions of The Jim Henson Hour (which the text refers to as MuppeTelevision) will be present. But then Digit is nowhere to be seen — so you might think that Jim Henson Hour characters were excluded but Bean snuck in because he originated in The Tale of the Bunny Picnic. Oh, but Clifford is in it. And two alien characters named Anthony and Fern who only appeared in a couple Jim Henson Hour sketches are featured on a page about monsters. So who knows.

For a Muppet fan, The Muppets Character Encyclopedia is great for either reading cover-to-cover, or picking up and flipping around to random pages to soak in all the Muppetiness.  But I think it would be equally compelling for a potential Muppet geek who hasn’t quite reached our level of obsessiveness.  If your co-worker Fred or your friend Sparky or your cousin Harriet is the kind of person who says “Oh, I love the Muppets!” but wouldn’t be able to tell you the difference between Julius Strangepork and Link Hogthrob, this book would a lovely gift for them.

And it would be absolutely perfect as a gateway for a young person who’s just starting to get into the Muppets… I can just imagine a nine-year-old kid devouring this book, then running to the internet to find out more about the Bossmen and look for clips of Mahna Mahna.

But whoever you may gift it to, you should definitely get a copy for yourself as soon as possible. You’re going to want to have that high-resolution photo of Gladys the Cafeteria Lady on hand at all times.

•This thing is packed with great photos, including some I’d never seen before. It’s also interesting to see the variety of pictures. The major characters obviously had lots of high quality shots to choose from, but for others, the creators of the book had to include screenshots.

•This encyclopedia has two Nigels! 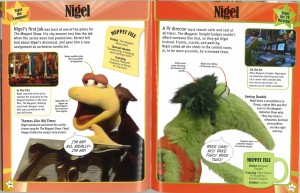 •Craig Shemin’s name is spelled wrong (“Craig Semin”) in the acknowledgements in the back.  Boy, I really hope somebody got fired for that blunder!

•A number of Muppets here debuted in The Muppet Show: Sex and Violence, but their first appearance is listed as The Muppet Show pilot.  Was Shemin instructed not to use the full title because it has the word SEX, or am I just over-thinking things?

•”All Frackles are monsters, but not all monsters are Frackles. This distinction is really only of concern to Frackles, monsters, and a few die-hard Muppets fans.” Thanks for the shout-out, Craig! 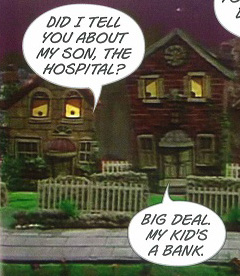 Click here to turn directly to the page with Gladys the Cafeteria Lady on the Tough Pigs forum!