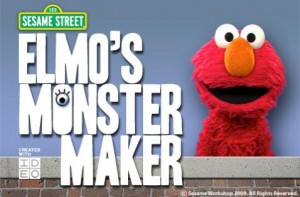 “Elmo wants you to make a monster friend!” So begins the iTunes Store’s description of Elmo’s Monster Maker, the newest Sesame Street app for iPhone and iPod Touch. And heck, if he really wants me to, I’d hate to disappoint the little guy, so I went ahead and bought the thing. As with Grover’s Number Special, I’m really not in the target audience for this game, but I reckon it’s worth my $3.99… although I was a bit disappointed that, unlike the Jim Henson Hour episode Monster Maker, it does not feature Harry Dean Stanton. Not even in a cameo!

In this game, Elmo asks you, the player, to choose a monster, and then four Muppet monsters parade past so you can pick the one you want to work with. But — horror of horrors! These monsters have no faces. So it’s up to you, the player, to give the monster eyes, a nose, and a hat. Once you’re satisfied with your monster’s combination of features, you can make it dance, or interact with Elmo, or do a couple other funny things. (I think at least two of the monsters are performed by Stephanie D’Abruzzo, but I can’t quite voice-chase the orange guy. Does anyone know who it is?) 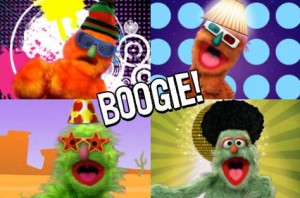 It’s kind of like a virtual version of the old Muppet Workshop toys, only you can’t actually puppeteer your monster. On the other hand, you can’ t lose the nose pieces under the couch. It’s fun to see what each monster does when you tap the dance button or the Elmo button, but once you’ve seen each monster’s actions once, there’s not much more to it. And unlike Grover’s Number Special, there’s not even really a challenge here. You’re not trying to accomplish anything other than putting funny hats on monsters.

But you know what? Kids don’t care. Kids love watching the same silly thing over and over and over and over again, so I have a feeling most young’uns are going to love making their monsters dance repeatedly until the batteries on their parents’ iPhones run out.

The other cool thing is that there’s a button to make Elmo take a picture of the monster, and then the picture is stored on your iPhone/iPod so you can e-mail it to yourself. Here are a couple monsters I made: 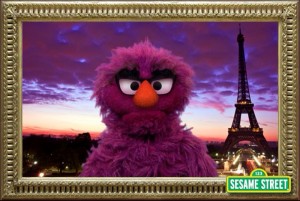 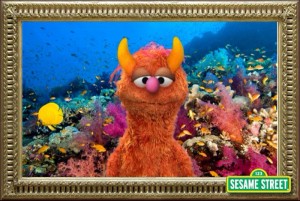 Anybody got a snorkel?

And then here’s one who has no eyes and a lightbulb for a nose. 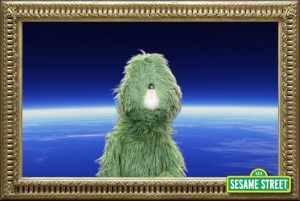 Someday this character will be more popular than Elmo.

I’m going to go ahead and say the same thing about this game as I did about the Grover game: If you’re a Sesame fan with an iWhatsit and you can spare four dollars, there’s no reason you shouldn’t check out this app. If you’re still not convinced, allow me to point out that if you choose the orange monster, you can give him a bucket for a hat, and there is nothing funnier than a monster with a bucket on his head.

Click here to change your facial features on the Tough Pigs forum!

Another Monster at the End of This Book: An App Review by Actual Children