My Favorite Muppet of the Moment – Gaffer the Backstage Cat 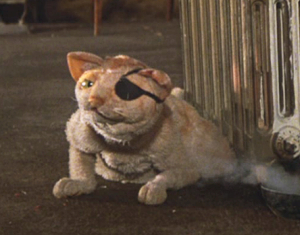 My favorite Muppet of the Moment is Gaffer the Backstage Cat.

Why did I choose Gaffer as my Favorite Muppet of the Moment?

Traditionally, I’m more of a cat person than a dog person. But while there’s a whole pack of Muppet dogs out there, there have been relatively few significant Muppet cats. I don’t know why this is. Maybe it’s because dogs are so naturally eager to please humans, so they’re drawn to show business, whereas cats would just as soon do their own thing, away from the spotlight. And in fact, on The Muppet Show, Gaffer spends almost all of her time a safe distance away from the stage and the audience. She just hangs out backstage doing her thing.* 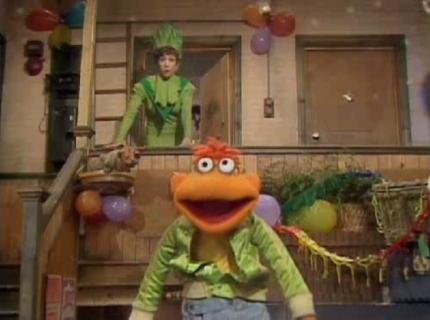 What makes Gaffer so great?

When we talk about how great the Muppets are, we often talk about the attention to detail that Jim Henson and his collaborators put into their productions, and Gaffer is attention to detail in feline form. The backstage goings-on at the Muppet Theater are already interesting enough, with various bits of lunacy, hilarity and crisis happening in the foreground. We would enjoy these scenes just as much if there wasn’t a Muppet cat sitting on a shelf in the background. But she adds texture to the world of the show, and it’s fun to watch her watching the craziness going on around her.

And speaking of little things that add a lot: Gaffer has an eyepatch! We don’t know why she wears it, or who gave it to her, but it gives her so much character. It tells us that she has a history, that she’s been through some stuff before she found her way to the theater. Or that she’s into pirate cosplay.

Gaffer is also among the ranks of the Muppets who were important enough to be given their own action figure by Palisades back in the 00s. Sure, she was a pack-in with Pops (as a nod to her presence in The Great Muppet Caper), but the folks at Palisades knew no recreation of the Muppet Show cast would be complete without her. When they made the Backstage playset, they even included her shelf, so she could keep an eye on whatever shenanigans her fellow Muppet toys got up to. Like the time she watched my Bunsen figure fall on the floor and break his glasses. That was a weird episode of The Muppet Show in Ryan’s Apartment. 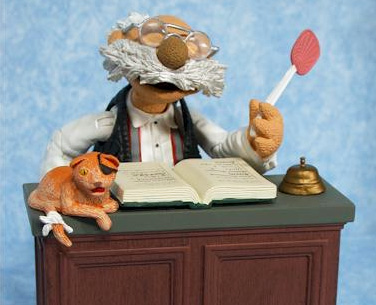 Well, there was the time she rubbed up against Sam and meowed, and he shooed her away. That was a nice showcase for her acting range. But her biggest featured moment was as the titular cat in the musical number “The Cat Came Back.”

(*NOTE: Or is that “his time” and “his thing?” I don’t know if there’s ever been an official word on whether Gaffer is a girl cat or a boy cat. Please let me know if you know!)

Click here to be a cool cat on the Tough Pigs forum!