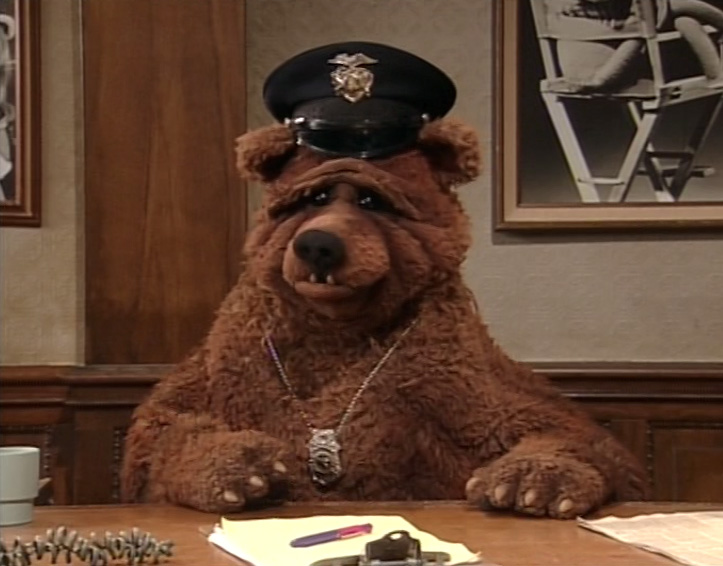 My favorite Muppet of the Moment is Bobo the Bear.

Why did I choose Bobo as my Favorite Muppet of the Moment?

Say, did you folks know that there’s a movie made by The Jim Henson Company coming out next week? I don’t know if you’ve been hit by the Happytime hype train like I have, but anticipation for The Happytime Murders is hitting a fever pitch. So I wanted to talk about the movie’s star. No, I’m not talking about Melissa McCarthy, as talented and enjoyable a performer as she is. And I’m not talking about Elizabeth Banks, Maya Rudolph, or Joel McHale, as much as I like them. I’m talking about Phil Philips, or more importantly, his performer. Between his starring role in The Happytime Murders and being part of an illustrious panel of Muppet performers in the documentary Muppet Guys Talking, I think it’s safe to say that 2018 is shaping up to be The Year of Bill Barretta. So in honor of The Happytime Murders’ release and Bill finally getting his moment in the spotlight, we’ve decided to discuss back-to-back Barretta characters for My Favorite Muppet of the Moment this week and next week.  (Stay tuned for our mystery Barretta character to be revealed soon…)

So why specifically Bobo? Well, seeing as in The Happytime Murders, Philips is an ex-cop and private investigator, I thought I’d look back at another Barretta character with some law enforcement experience, and seeing as Bobo has been a KMUP security guard, as well as an agent for both the TSA, the Fairyland PD, and C.O.V.N.E.T., I can’t think of a better character to celebrate this week.

Also, how funny would it be to see Bobo investigate a murder? Watching Bobo stumble and snark his way through the investigation, only to walk in on the murderer right before they struck again, would be something I’d pay to see. Hey, Disney! If you want to get in on this puppet murder mystery film game, I think I’ve got a pitch for you! 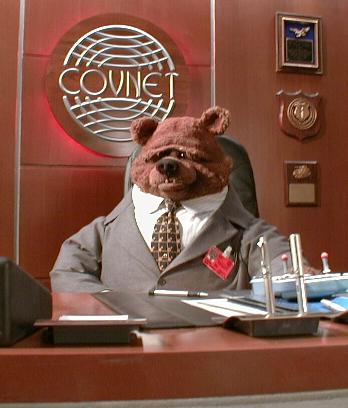 What makes Bobo so great?

In terms of cooking, Bobo is to the Muppets what that little dash of oregano on top of a big heaping bowl of spaghetti: it may not be the first thing you think of, but adding him to any project almost always makes it better. When he acts as a villain’s henchman, he manages to undercut the menace with his well-meaning nature and his frequent misunderstanding. Sure, C.O.V.N.E.T. seems like they mean business, but when he mishears “the remote” for “the goat,” you remember you’re watching a Muppet movie, and Muppet movies are supposed to be funny. (Try not to at least giggle when he sings his jalapeño song later in Muppets From Space.) He is a fantastic comic foil no matter who he’s paired with.

There’s just something about Bobo’s confidence that makes him so endearing. No matter what he’s doing, he does it with this sureness that makes his eventual mistakes all the funnier. But I still root for him because he’s so confident. Who wouldn’t want to have that slight edge of bravado? He’ll always win in the end, or at least manage to crack everyone up doing so. It’s funny; there’s kind of a dichotomy between Bobo and that other famous ursine Muppet, Fozzie Bear. Fozzie tries so hard to be funny that he can’t be, which is what makes him funny. Bobo doesn’t try at all to be funny, and yet, he always is.

Probably one of the best showcases of Bobo is the Cindy Crawford episode of Muppets Tonight, so I picked a clip that shows Bobo’s range as the confident idiot, the lovable underdog, and just how darn funny the character is.

Click here to get your friend some jalapeños on the ToughPigs forum!