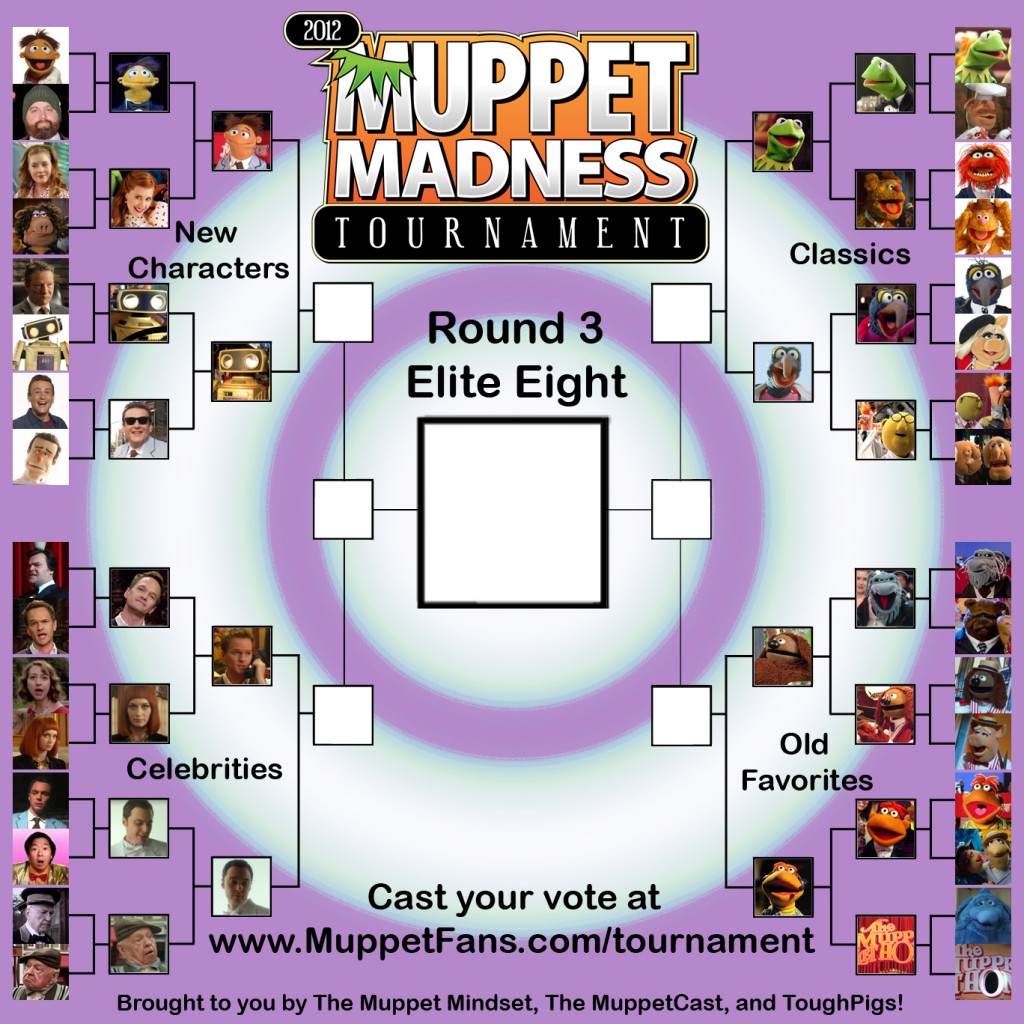 Wow, what a spellbinder that 2nd round of the Muppet Madness Tournament was!  The winners were clear from practically the beginning, with characters like Walter, Kermit, and Scooter zipping ahead immediately.  Sure, it took away from some of the excitement, but it was still amazing to see the popularity of some Muppets skyrocket so quickly.

In any case, Round 3 of the Muppet Madness Tournament is officially on!  And our Elite Eight has been chosen!  Scroll down to read our guesses as to who will win each bout, and then head over to the Muppet Madness website to cast your votes!

BUT WAIT!  There’s more!  Starting today, you can cast your vote once every six hours!  That’s right, you can vote up to four times a day!  More if you happen to live on Saturn!  Because their days are longer, you see.  The polls are open until midnight on Monday, March 26, so you’d better get started!

The perpetual fanboy is up against the battery-operated machine man!  As much as I loved the splash 80s Robot made in the movie, there’s no way he can tackle the juggernaut that is Walter.  And this marks the last time anyone will ever refer to Walter as a “juggernaut”.

Kermit the Frog vs. Gonzo

Way back in the very first Muppet Vault, people got mighty pissed at us for pitting Kermit against Gonzo in the first round.  Well, their rivalry was fated, because three rounds later, they’ve found themselves up against each other again!  Will Kermit leap ahead again?  Or will Gonzo’s fan club actually show up in time to vote this time around?  We think it’ll be Team Kermit, but we’d love to be surprised.

This race could go to either of these stars of hit CBS sitcoms.  Neil Patrick Harris is the bigger Muppet fan, and the all-around more awesome/famous guy.  But Jim Parsons had the superior and more memorable cameo in the film.  But it’s hard to slow the immense fan love for NPH, so Parsons will be calling it quits after this round.

Rowlf the Dog vs. Scooter

Wow.  I am truly stumped.  Two incredibly popular characters, both performed by puppeteers who have passed away, both silent for far too long, and both who essentially rejoined the inner circle with the new Muppet film.  Will Rowlf’s “classic” hammock flashback overpower Scooter’s “You are all naked!”??  This one’s too close to call.

So what are you waiting for?  Go vote now, and then every six hours through March 26!

Click here to refer to Walter as an X-Men villain on the ToughPigs forum!