Almost exactly one year ago today, we made Muppet fan history by starting the first ever Muppet Madness Tournament, pitting dozens of popular Muppet, Sesame, and Henson characters against each other in a no holds barred melee cage match to the death to see who would be crawling out from the wreckage as the victorious Muppet above all other Muppets. Bert and Ernie were the lucky ones to go the distance, and we are simply foaming at the mouth to find out who will take home the glory in our second annual Muppet Madness Tournament.

A lot has already changed this year. The biggest change is that the Tournament is being run by the recently-announced partnership between ToughPigs, The MuppetCast, and the Muppet Mindset, which is collectively referred to as MuppetFans.com. Along with fan artist Dave Hulteen (who is responsible for almost all the Muppet Madness artwork, including that amazing logo above), we’ll be bringing commentary, news updates, and surprises on all three of our websites. It’s an event in epic proportions (as far as Muppet fan sites go).

Another change is in the quadrants. Rather than separate characters into their respective TV shows and films, we organized them by species. So there’s a quarter for humanoids (the not-quite-humans-but-close-enough types), a fourth for animals (the if-animals-could-talk-this-is-who-they’d-be types), twenty-five percent for creatures (the they-don’t-exist-in-the-real-world-so-stop-looking types), and a half of a half for character variants (the they-were-in-last-year’s-tournament-but-now-they’re-wearing-different-clothes types).

We do have some surprises up our sleeves this time around, much like last year’s “Wild Card” round (which saw the return of Gonzo to the tournament just before the end of the game). But although there’s a lot of unpredictability to be had, we do have a voting schedule locked in. The rounds will be voted on as follows:

And now for the exciting part: You get to vote! Head on over to the Muppet Madness Tournament website and cast your vote for your favorite characters! You’ll have a chance to vote once every 12 hours, so set your alarms and keep on heading back until we make the internet explode with our awesomeness.

As any responsible voter should do, we hope you’ll take the time to educate yourself on the pros and cons of the nominees. To help you with that, we’ve mapped out the first round of characters so you can make the most important decisions of your life with a balanced conscience.

What could be more respectable than a theater aficionado and a skilled surgeon? Of course, one of these gentlemen of the arts and sciences (respectively) only announces the insanity, while the other brings it himself through the use of bad puns.

The favorite: Alistair Cookie. It’s all about the smoking jacket.

It’s the Dark Side against the protector of justice! But more likely, it’s two guys in dark clothing, too inept to do their jobs with any sort of efficiency.

The Favorite: Dearth Nadir. Most likely because George Lucas will be voting.

One is smarter than a speeding bullet, the other is reporting to you live from a far-off land you’ve only read about. But can super heroics defeat the power of the press??

The Favorite: Super Grover. And he is cute too.

One of the strangest matches of the tournament! First Mate Piggy comes equipped with both ray guns and karate chops, while Carl… eats things.

The Favorite: First Mate Piggy. Because of the shoulder pads.

Abby Cadabby vs. Cantus the Minstrel

It’s Fairy vs. Fraggle! Both of these pink-haired folks have a penchant for magic and speaking in riddles. What happens when Cantus’s magic flute goes up against Abby’s magic wand??

The Favorite: Cantus. But only the favorite is favored by favoritism. Or something.

Could Snuffy and Sweetums be long-lost cousins? Probably not, but how can a (previously) imaginary friend match up against the monsteriest of monsters?

The Doozers vs. Ludo

Aw, that Doozer is so little! And Ludo is so… not so little! Would an infestation of Doozers in his fur bring Ludo down? Or will a swift stomp take care of his Doozer problem once and for all?

The Favorite: Doozers. If those helmets don’t protect them, nothing will.

One of these two rarely says more than his own name, while the other can’t help but spout sage advice and crossword puzzle solutions. But neither one makes a lick of sense.

The Favorite: Mahna Mahna. Because: Do doo do do doo.

Rizzo the Rat vs. Link Hogthrob

The Muppet Show’s resident rodent is up against the hubristic hog! Can Gonzo’s pal possibly overcome a real-life spaceship captain??

The Favorite: Rizzo the Rat. You’d do just as well if you had 3,000 cousins voting for you too.

Sam the Eagle vs. Bobo the Bear

Look at these two guys: low brow, glum look, often missing the point… they were made for each other! Or at the very least, to be pitted against one another in a weird fan-made contest.

The Favorite: Sam the Eagle. Finally, something cultural in this contest!

The Penguins vs. Hoots the Owl

This would be totally worth seeing in real life if only to see penguins get thrown in the air to the jazzy tunes of Hoots’ sax.

Slimey vs. The Worm

I wonder what would happen if Labyrinth’s Worm would invite Slimey in for tea (and to meet the missus). Would Slimey convince the Worm to read him a Trash Gordon story? Or would the Henson universe implode as we know it???

The Favorite: The Worm. People sure do love that little guy. Even famous people!

Prairie Dawn vs. The Swedish Chef

It’s the adorable vs. the inedible! How could we possibly pit sweet, little Prairie Dawn against the possibly cannibalistic Swedish Chef? We’re not too worried, that Prairie girl can kick a lot of butt when she wants to.

The Favorite: The Swedish Chef. For reasons we don’t understand (because we don’t have a translator).

Statler and Waldorf vs. Roosevelt Franklin

We had more complaints about the lack of the curmudgeonly duo of Statler and Waldorf in last year’s Muppet Madness Tournament than any other character. But can their ability to mock a desperate bear overcome the long-absent fan favorite Roosevelt Franklin?

The Favorite: Statler and Waldorf. Sorry Roosevelt, you might be sent to cold storage again.

Fun Fact: Did you know that after performing “Mr. Bassman“, Floyd and Scooter became arch rivals? It’s true! It made for some awkward moments in the back of the Electric Mayhem bus (at least until the chorus of “Tiny Dancer”).

The guitar player vs. the game show host! Will the valley girls come out in droves to vote for Janice, or will the Wink Martindale fan club make a surprise appearance to push Guy Smiley into the next round??

The Favorite: Janice. Because she doesn’t get naked for just anyone, even if it is artistic.

Muppet fans, start your engines! Head on over to MuppetFans.com/Tournament to cast your votes and help declare the winner of the 2011 Muppet Madness Tournament! 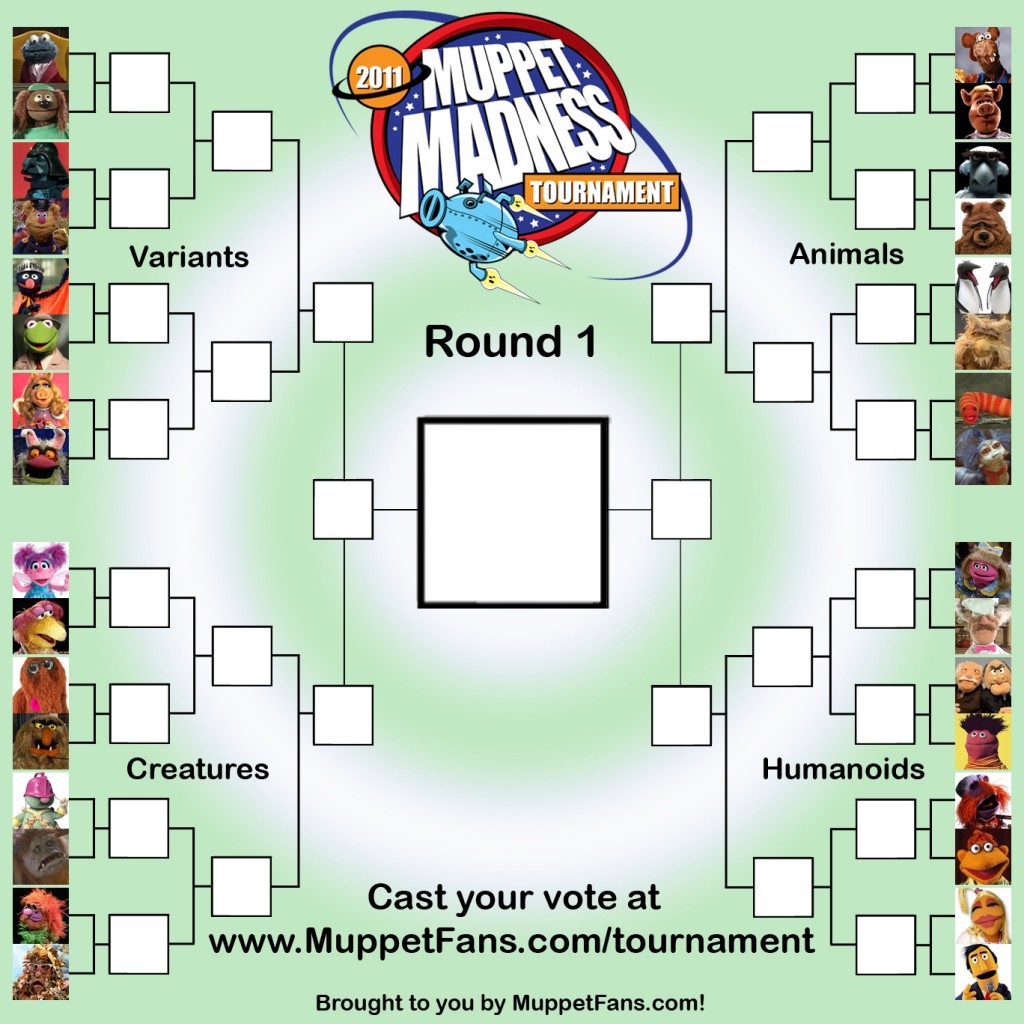 Click here to vote early and vote often on the ToughPigs forum!