Mere days after the ousting of fan favorite characters like Dr. Bob, Reporter Kermit, Sweetums, and Roosevelt Franklin, Round 3 (or as it’s referred to in some sort of sports thing, Regionals) has begun!

We’re down to our last eight characters, soon to be narrowed to four. Then two, then one. Thanks, math!

Be sure to head over to the Muppet Madness Tournament website and vote for your BFFs between now and March 28 at midnight. Not only that, but you can vote every 8 hours! That’s up to three votes per day! And you’ve got only three days to get your votes in! So what are you waiting for?? Go vote!!!

But first, let’s take a look at who’s competing in the Regionals this year:

This is bound to be one of the most complained-about race in the tournament this round. Not only is it impossible to choose between the two best fuzzy and blue characters performed (to perfection) by Frank Oz, but it’s going to be a challenge to decide which of their amazing dual personalities to vote for. At least we don’t still have Dearth Nadir and First Mate Piggy in the mix, or else we’d go all Andy and Randy and shout “This game is too hard!!!”

The Favorite: Super Grover, though Alistair will give him a run (flight?) for his money.

Never in my life did I think we’d see a competition between Big Bird’s giant imaginary friend and a nonsense-spouting caveman. But here we are! And since they’re obviously powerhouses after having defeated Cantus and the Doozers, they’re both forces to be reckoned with.

The Favorite: Snuffy, if only because there’s only so many times you can have “Mahna Mahna” stuck in your head.

Rizzo the Rat vs. Penguins

This game isn’t fair! Penguins are so great and tossable, but Rizzo has had such a presence in the last 20 years, especially in the role as Charles Dickens’ rat friend (I think that part is based on truth). And now that Sam the Eagle and Slimey are down for the count, we’ve got some tough choices to make…

The Favorite: The Penguins. Nobody goes to the zoo to see them feed the rats (though they probably end up seeing a lot of that anyway).

Statler and Waldorf vs. Scooter

Which will you choose: The guy who starts The Muppet Show or the old dudes who end it? The Swedish Chef and Janice already got a taste of their medicine, but who will make it to Round 4??

The Favorite: Statler and Waldorf. It’s 15 seconds to curtains for Scooter.

And there you have it! Head on over to the Muppet Madness Tournament site to cast your votes right now!!! 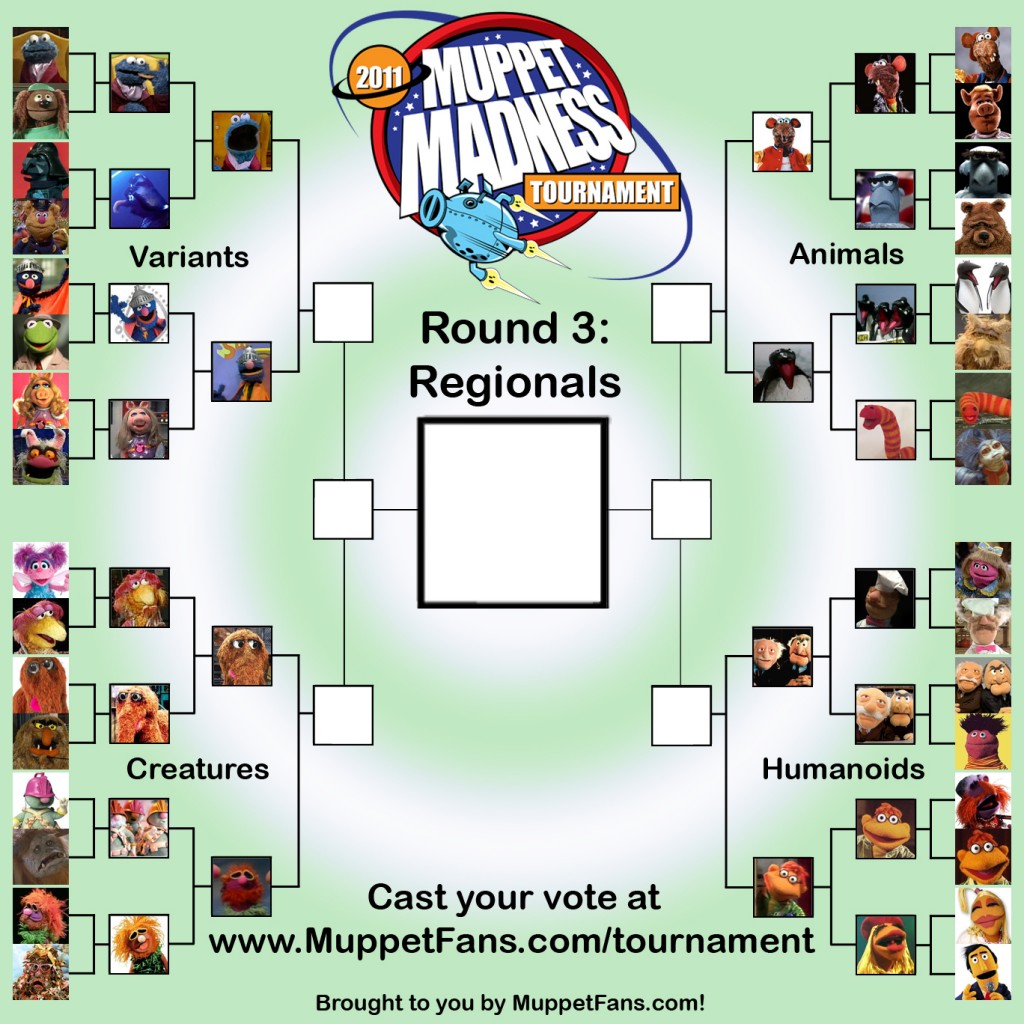 Click here to come down to the wire on the ToughPigs forum!