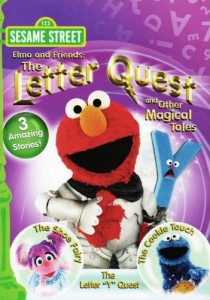 As the owners and proprietors of this little Muppet fan site you’re currently perusing, we sometimes find ourselves in possession of the latest swag, including such items as Sesame Street DVDs. Sometimes those DVDs are chock full of classic skits and songs with all of our favorite characters from when we were kids. It’s days like those that make me proud to be a fan of those monsters and birds and grouches and Gordons.

But sometimes those DVDs are compiled of new stuff, which isn’t bad by any means, but it certainly isn’t Sesame Street circa 1975. No, this is the Sesame Street in the Age of Elmo, with his trusty magician Abby Cadabby at one side, a slightly less angsty Telly at the other, and a Cookie Monster on a fictional diet.

Elmo and Friends: The Letter Quest and Other Magical Tales is the latest DVD from those Sesame folks, but you wouldn’t know it from the title. “Sesame Street” has been replaced by “Elmo and Friends”, which is actually pretty accurate for what the show is like nowadays. The DVD was exclusive to Target stores for the past year, but is now available anywhere pumpkins are sold. 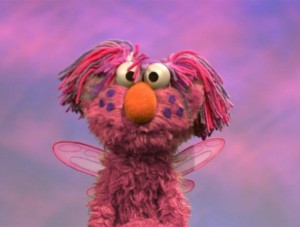 The DVD has three full Street stories, separated by a few short skits, all of which are totally magical. But the first sketch is a bit more creeptastic than magicky. Elmo and Abby show how they’re the same and different, and Elmo demonstrates the latter by turning himself pink, growing ears, gaining freckles, sprouting wings, and donning an unruly mop of hair. And it totally freaked me out. And if that picture above doesn’t freak you out too, then you are not well in the head. 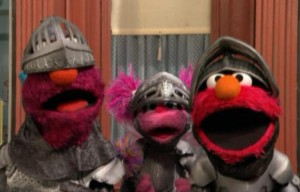 The first Street Scene is the DVD’s almost-titular “The Letter Y Quest”, in which Elmo, Abby, and Telly dress up as knights and help a soul-searching letter Y to find his true purpose in life. The main part of the fun comes from the fact that the monster/fairy trio are having a little too much fun with all their pretending. They’re a little rambunctious, a little off-the-wall, and they act like real kids playing in the backyard. But the surprise star of the episode is the yak (which starts with Y!), who made me laugh just by saying hi to Gina. Well played, Yak. Well played. 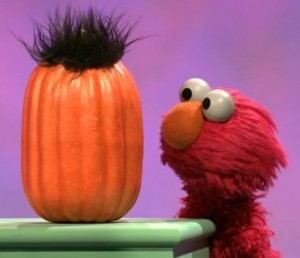 Skit #2 has Abby conjuring a little boil and bubble to bring a friend for Elmo. She tries teleporting Dorothy, but ends up with a tiny pumpkin in a bowl. And then she tries phasing in Bert, but accidentally poofs in a Bert-shaped pumpkin with Bert’s hair. But the question remains, did she accidentally create new pumpkins, or did she transform Dorothy and Bert’s head into the orange gourds? Maybe Abby should get a little more practice with that wand before risking decapitating any more of her friends.

Our next Street Scene is one of our favorites from recent years, “Telly and the Shoe Fairy”. Of course, this title is all wrong, because the name of Neil Patrick Harris’ character is “The Fairy Shoe Person” (get it right, America!). Nevertheless, NPH is inspired as he brings a boot-full of hilariousness, good music, and attitude to a character that’s only around for a few minutes. Chris also shines as the Fairy Shoe Person’s foil, and I’m always happy to see Telly in a starring role. But no matter how hard I wish, I can never get the Fairy Shoe Person to visit me and give me shoe advice. If anyone out there knows the name of his agent, please let me know. 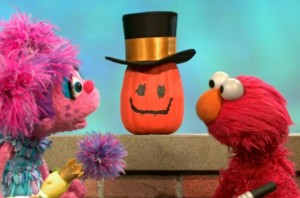 The last skit involves Abby creating a doll for Elmo out of naught. (Why Elmo needs another doll is beyond me. What a greedy kid.) Of course, she mucks things up by creating another pumpkin. I’m starting to see a pattern here: Abby attempts to invoke the dark arts, she falls victim to the “be careful what you wish for” rule of magic, and she’s forfeited her everlasting soul to the devil in exchange for her limitless powers.

Cookie Monster takes center stage in the third Street Scene: “The Cookie Touch”. Sandra Oh guest stars as the Fairy Cookie Person, and she gives Cookie Monster the irresponsible superpower of turning anything he touches into a cookie. Naturally, he ruins all of his friends’ personal property by turning their stuff into baked goods and devouring the evidence. He totally could’ve used his powers to end world hunger or he might’ve learned a lesson about the futility of greed, but instead he laments the fact that he can’t eat his mommy’s lasanga anymore. I guess that’s a good lesson to learn. Or something. And then cookies were once again relegated to being a sometimes food. 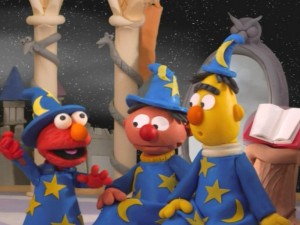 The DVD also includes a bonus feature: the “Wizards” episode of Bert and Ernie’s Great Adventures. Of course, this is the episode that features special guest star Elmo. Really? We can’t get away from him for just five minutes?? In any case, I’m a sucker for these Claymation Bert and Ernie sketches. They’ll never be nearly as iconic as the old Jim and Frank skits, but they’re pretty fun, and rarely dull. I don’t even mind that this episode completely reeks of Harry Potter and is teaching our children the ways of witchcraft and devil worship.

So what did we learn from this DVD? Magic is not something to mess around with. So I hope all the kids at home who were planning on experimenting with dark forces are paying close attention! We also learned that Chris looks delicious as a cookie (but not as delicious as Sandra Oh in her cookified dress… rawr!). And Neil Patrick Harris can literally do no wrong. But we already knew that last one.

Click here to make this article disappear on the ToughPigs forum!