The following Q&A was performed by Sarah Grace. Thanks for your help, Sarah! 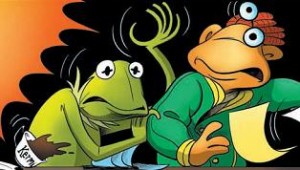 Another Muppet Show Comic Book story arc has come and gone (and yet another has already begun), and writer Roger Langridge continues to crank out some fantastic Muppet material for us to enjoy with our eyes.

In his latest “Family Reunion” arc, he brought back Skeeter with the help of artist Amy Mebberson. And if he can do that, he can accomplish anything!

In our eighth Q&A with Roger Langridge, we ask him all about Skeeter, Star Wars, and superheroes. Check it out!

ToughPigs: Congratulations on your Harvey Awards nominations! Has all that fame gone to your head yet?

Roger Langridge: Ha! There are no famous people in comics. There’s Stan Lee, Charles Schulz and everyone else. And, to tell you the truth, I kind of feel like the nominations are as much for Jim Henson as they are for me. If I wasn’t working on these characters I doubt my work would be getting this sort of attention.

TP: Looking back, how was it working with the incredibly talented Amy Mebberson?

RL: It was a great experience. Amy knows the characters back to front and upside down, and fortunately for me she can draw them right side up as well, so it all worked out beautifully. She brought a lot of her own ideas to the table, so in that sense she was an ideal collaborator.

TP: When you?¢‚Ç¨‚Ñ¢ve taken breaks from your artistic duties, you?¢‚Ç¨‚Ñ¢ve worked with artists like Mebberson and Shelli Paroline. The next time you need a break, would you push to get one of them again? Or would you be interested in seeking out another new artist? If it?¢‚Ç¨‚Ñ¢s the latter, do you have anyone in mind?

RL: I can think of a few people I’d love to work with, although I’d be very happy to work with either Shelli or Amy again. I would love to do an issue with Jerzy Drozd at some point – he’s a HUGE Muppet fan and a fine cartoonist.

TP: Now that you?¢‚Ç¨‚Ñ¢ve seen the fans?¢‚Ç¨‚Ñ¢ reaction to bringing Skeeter into the Muppets?¢‚Ç¨‚Ñ¢ world, would you consider bringing her back in a future arc?

RL: Already talking about it!

TP: In our last interview, you mentioned that you didn?¢‚Ç¨‚Ñ¢t mention Skeeter?¢‚Ç¨‚Ñ¢s name in the book because of decisions made on Disney?¢‚Ç¨‚Ñ¢s end. What made them allow you to reveal her name in the end of the story? Was there a deal made where you could only say her name once, like a swear word in a PG-13 movie?

RL: I don’t think it was quite as thought-through as all that – my impression is that everybody at Disney was just being over-cautious and passing the responsibility for making the decision to somebody else in the chain, until I guess it finally hit somebody who could say yea or nay, too late for us to do anything about the first couple of issues. By then we were committed to a course that we kind of had to see through.

TP: Since the last time we spoke, you?¢‚Ç¨‚Ñ¢ve been announced as the new writer on Marvel?¢‚Ç¨‚Ñ¢s Thor: The Mighty Avenger. Has it been difficult juggling two important properties at the same time? And has there been any additional pressure considering there are movies in the works for both franchises? 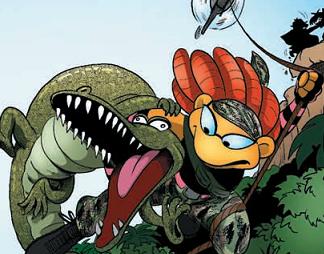 RL: It’s been difficult to juggle just in terms of finding the time to work on them both – the schedule worked fine on paper, but then convention season hit me full in the face and I’ve been scrambling ever since. I’m keeping on top of it by the skin of my teeth. As far as additional pressure goes – not really. If the movie studios are paying the slightest bit of attention to what I’m doing, they haven’t told me about it. (Which is good! I’d be very happy for it to stay that way!)

TP: At Comic Con earlier this month, you met a fan-made Dearth Nadir/Gonzo. What was it like meeting one of your comic book creations in real life? And did it inspire you to create any Star Wars parodies for the Muppet Show Comic Book?

RL: It was great fun, of course. The same fan had a proper Gonzo puppet as well, which looked FANTASTIC. And he could do the voice! As far as bringing in Star Wars parodies to the comic, I’d have to watch the movies again first. I don’t think I’ve watched any of them since they came out, and then only the original three. I wasn’t even slightly curious about the prequels!

TP: Moving on to the Muppet Mash story arc, what inspired the ?¢‚Ç¨?ìLink Hogthrob, Monster Smasher?¢‚Ç¨¬ù skit? Can we expect more variations on the Pigs in Space trio in the future?

RL: I won’t know until it happens! As far as where that came from, it just grew out of my desire to make each story arc its own thing without totally breaking the Muppet Show format. Bringing in these little variations now and again will hopefully stop things from becoming repetitive. (Pigs in Space fans rest assured, they’re back on board the SwineTrek as per usual in the next arc.)

TP: Did you foresee any problems with Gonzo being a vampire, considering the fact that he has no teeth?

RL: Well, if you’ve read the story, you’ll be aware that that wasn’t really an issue! But I don’t mind giving him teeth now and again if it’s funny at that particular moment. Donald Duck has been getting away with it for years. 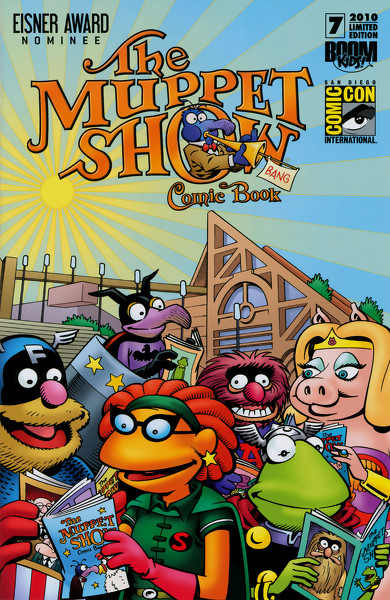 TP: Can you give us a tease on what to expect from the next three issues?

RL: Issue #9 features Mummies – an old vaudeville act called Calistoga Cleo and the Pharaohs guest-star on the show. And Statler and Waldorf become rivals for the fair lady’s heart! Issue #10 is a Werewolf-themed issue, featuring an old blues singer called Howlin’ Jack Talbot… and #11 is the inevitable Frankenstein issue, with Bunsen Honeydew and Beaker doing the “mad science” honours.

TP: Do you know what will be coming up after the Monster Mash arc? Any hints??

RL: The next arc will be called “The Four Seasons” – mainly so I can do a Christmas issue in December and not have it immediately seem anachronistic once it’s collected. So there’ll be seasonal themes for four issues. Then, after that… romance!

TP: In your variant cover to issue #7 for Comic Con, there are some fantastic superhero parodies. But we couldn?¢‚Ç¨‚Ñ¢t place Animal; is he a parody of a specific superhero? And is there any chance we?¢‚Ç¨‚Ñ¢ll see some superpowered Muppets in the comic?¢‚Ç¨‚Ñ¢s future?

RL: Animal was wearing a Superman outfit (with an “A” instead of an “S”), but the colourist seemed to deliberately avoid copying the precise colour schemes for the most part – I suppose to avoid any legal problems. As for super-powered Muppets, it’s not really something I’m interested in pursuing; I like the fact that they’re basically ordinary — weird, but ordinary. Making existing characters who work just fine without super-powers into super-powered versions of themselves always seemed like a strange impulse to me, and not something I particularly enjoy reading. That’s just me, though – I’ve no doubt somebody else will get around to it eventually!

Many thanks to Roger for all of his fantastic work!

Click here to sink your teeth into the ToughPigs forum!