Kermit the Week: Birthday Presents for the Boss

Welcome to Kermit the Week!  Celebrating Kermit the Frog’s 60th birthday with a week’s worth of articles celebrating the life and career of the world’s most famous frog!

Everyone knows the best part about your birthday isn’t the satisfaction of having another year of wisdom added to your roster or getting a chance to spend time with all your loved ones, or even just to reflect on life in general and feel grateful for all that you have. Heck no! It’s obviously all about the presents! Lots and lots of presents! Cake is cool too, but mainly the presents!

Though Kermit might not own up to gifts being the most important part of a birthday, he can’t deny that sixty is a pretty impressive milestone. The presents from his friends and family are already piling up, and I’m here on the scene to give you guys commentary on all the gifts being given.

It looks like he’s about to open his first one. Let’s see what he got! 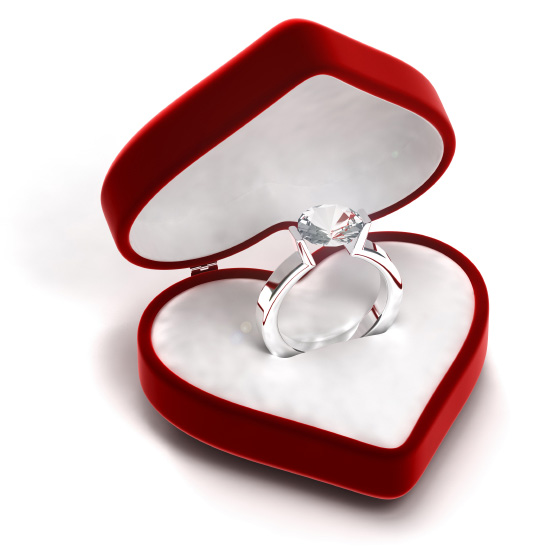 Miss Piggy was quick to demand Kermit open her gift first, and it looks like she got him… Ah. A diamond ring. Well. Can’t say none of us saw that coming. Good luck with that one, Kermit! 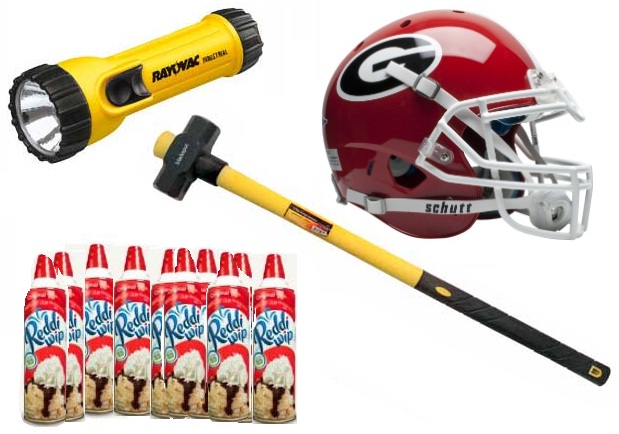 Next is a present from Gonzo, which is incredibly bulky and weirdly shaped. Probably because inside the wrapping is a sledgehammer, a football helmet, a flashlight, and fourteen canisters of whip cream, along with a note that just reads “Hope you have a blast!” No one is certain what Gonzo’s intention for all these objects are. Nobody asks. 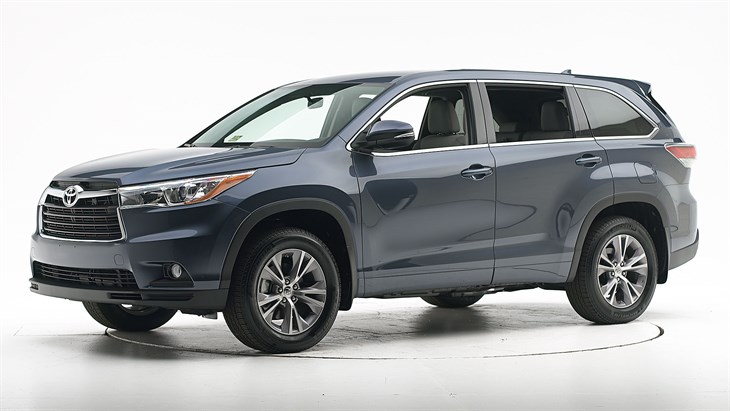 Rowlf’s present is a little too big to bring inside, so we all look out the window to see that it’s a Toyota Highlander. Turns out Rowlf was given so many free cars when he did those Toyota commercials last year that he’s been trying to pawn them off on other Muppets ever since. 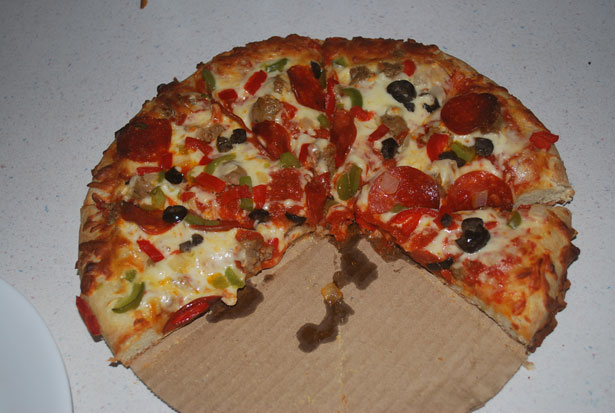 Everybody’s favorite rat shows up fashionably late to the party with a pizza as his present. Well, I mean, Kermit knows how much Rizzo loves food, so it’s really the thought that counts, right? Even if a quarter of that pizza happens to be missing and there are crumbs all over Rizzo’s whiskers. 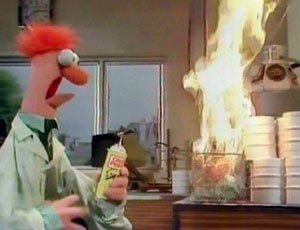 Bunsen and Beaker told us all how they’ve been hard at work for weeks now on their newest invention: the Saturation Converter 4000x. They wanted to give Kermit a machine that’d allow him to try being a different color than green for once. Too bad it just caught on fire the moment they flipped the “on” switch. (Disclaimer: No Muppets were harmed in the using of this invention. (Disclaimer 2.0: Except for Beaker.)) 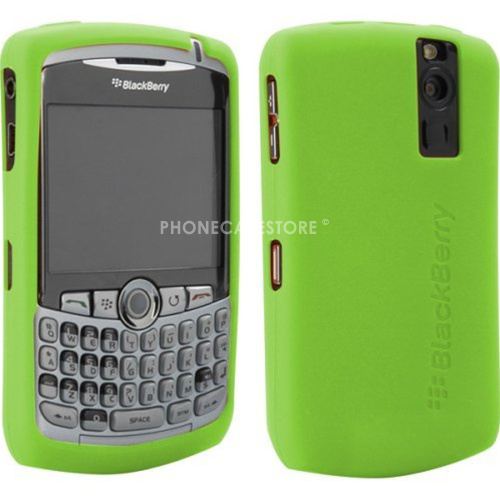 Scooter wins all the practicality points when he presents Kermit with a new Blackberry phone. It’s already got all of the birthday frog’s contacts programmed on it, as well as alarms and reminders for all upcoming televised events and interviews. Not to mention it’s Kermit’s favorite color! 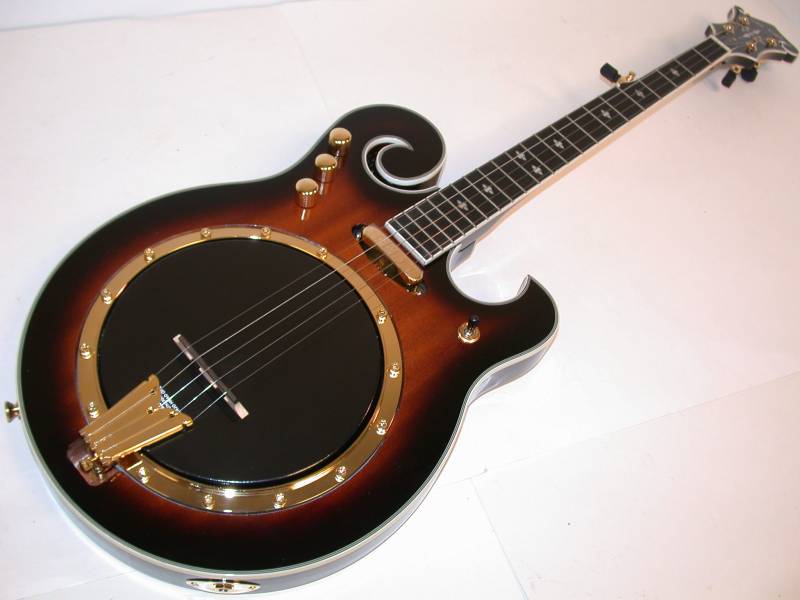 After playing enough gigs on Jimmy Kimmel, the Electric Mayhem saved up enough to buy Kermit his own electric banjo. Yes, that is a thing that actually exists. 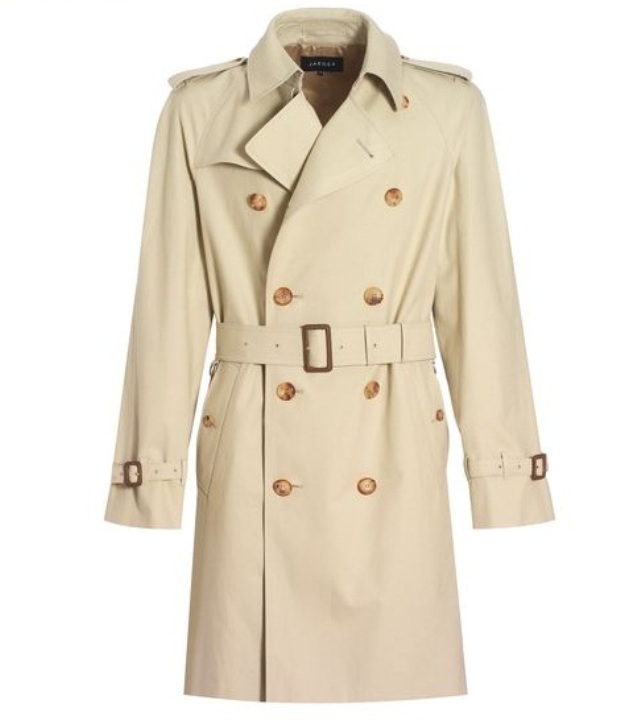 When the Sesame Street crew heard it was Kermit’s birthday, they figured they’d all chip in to get Kermit a new trench coat. Even though he’s not really wearing a trench coat while performing much these days, the gang from the Street figured it’ll remind him of the good old times when they hung out more often. 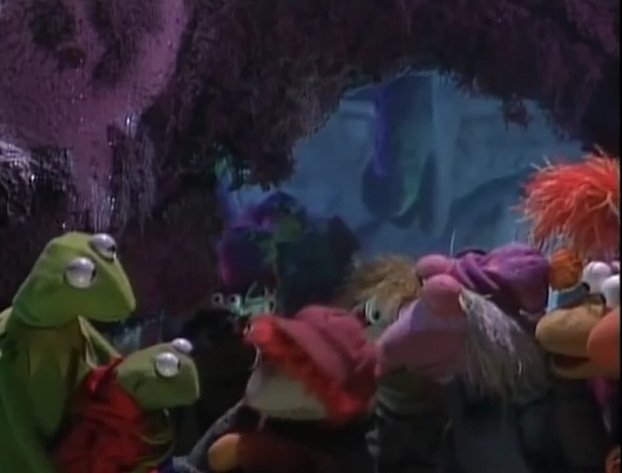 The Fraggles give Kermit a rock. Yup, the same rock from Muppet Family Christmas. Way to be creative, guys. 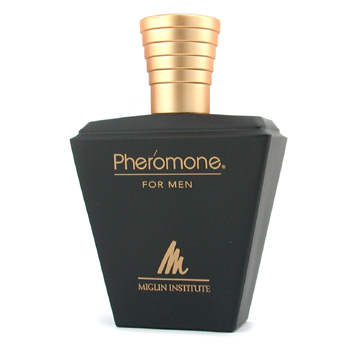 Why Pepe somehow thought that giving Kermit pheromone cologne to “attract all the sexy ladies, h’okay” was acceptable while Miss Piggy was in the room is still a mystery to me. Needless to say, Miss Piggy just karate chopped him out the window. 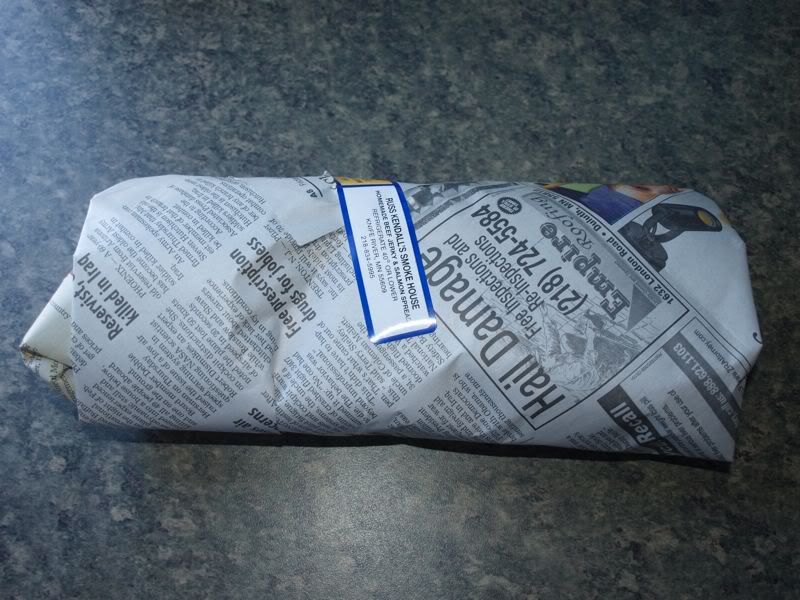 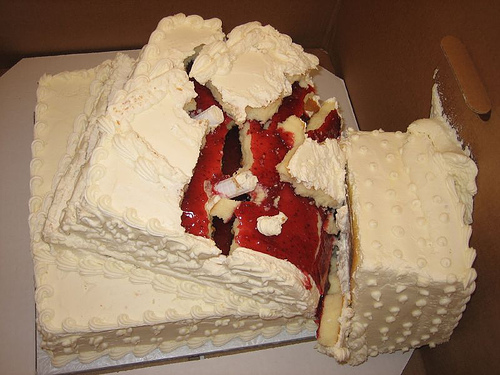 The Swedish Chef wanted to make a delicious cake for Kermit’s sixtieth, but something must have gone horribly wrong. He’s trying to explain, but all we can make out is something about “termite’s wearing bowler hats” and an “Irish jig contest.” Huh. I guess we’ll never know. 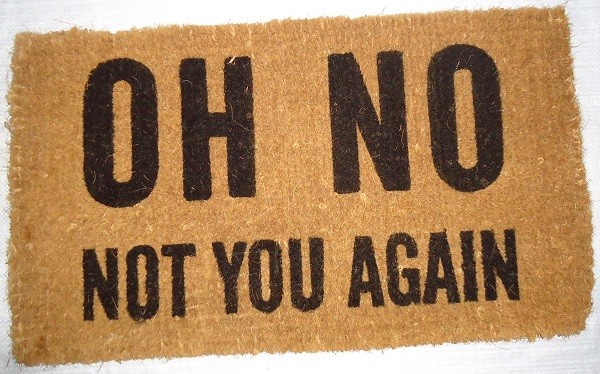 It doesn’t take a rocket scientist to figure out who this doormat is from. It’s basically Statler and Waldorf’s mantra. 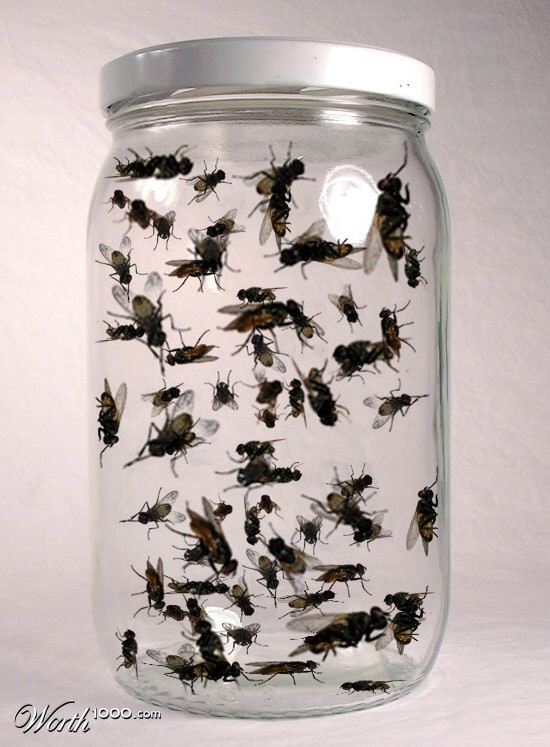 Kermit’s family back at Paradise Swamp would never forget their famous relative’s birthday and sent him a jar of flies. Muppets are already begging Kermit to wait on eating this particular present until after everyone’s gone home. 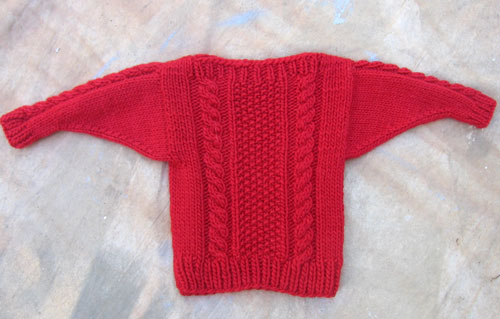 Everyone’s surprised that Walter’s gift is just some ordinary red sweater and not some grand, expensive piece of Muppet memorabilia… Oh. Wait a minute, Walter just broke into a story about his epic search for the sweater Kermit wore on October 2nd, 1966 on The Ed Sullivan Show, which cost him nearly three whole paychecks just searching for it. I mean, guys, he traveled to Norway to retrieve it. Never let it be said that the guy’s not dedicated. 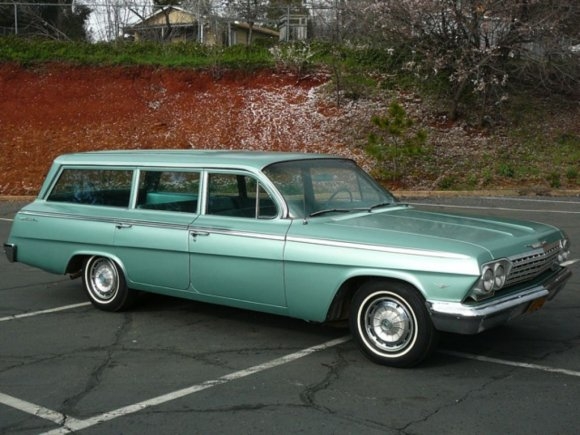 Robin and Sweetums teamed up this year to give Kermit a discount on a used Station Wagon over at Mad Man Mooney’s lot. Too bad no one told them about Rowlf’s Toyota gift. 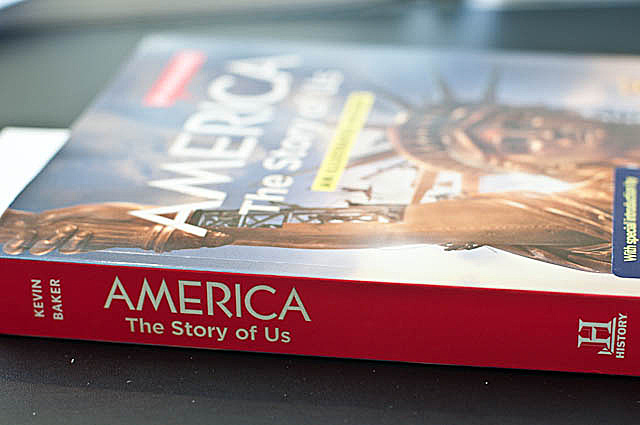 Sam’s given Kermit a boring looking book about America. Figuratively no one is surprised. 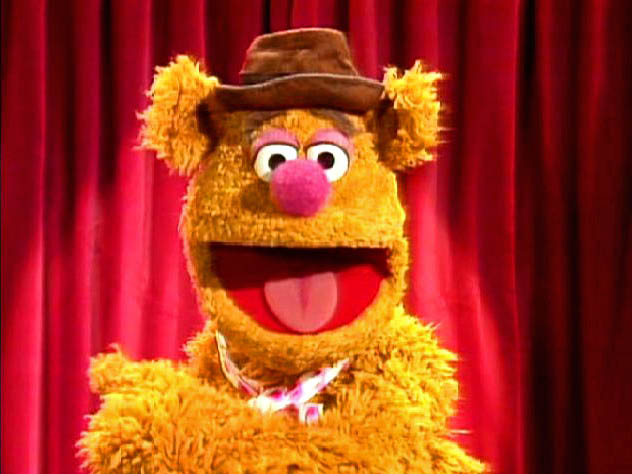 Fozzie exclaimed something to the effect of, “There’s no better gift than comedy!” and has proceeded to pull a microphone from inside his pork pie and starting a standup routine. It started out strong, but it’s gone on for quite a while now and Fozzie’s getting more self conscious about his gift choice by the minute. He’s basically just continually apologizing now. Poor bear. 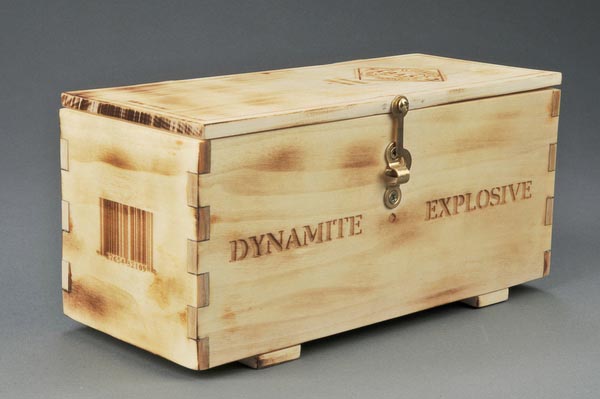 All right, guys, we’re on the last gift now, and it looks like it’s from Crazy Harry who promised he’d stay away from… oh. Oh no. Okay, well, commentary’s over. In fact, party’s over, so. Out. Everyone, OUT! ABORT PARTY! RUN, MUPPETS, RUN, BEFORE IT BLOWS!

Click here to go give Kermit a birthday gift on the ToughPigs forum!

Kermit the Week: In Memory of a Coat

Kermit the Week: The Many Facets of the Frog