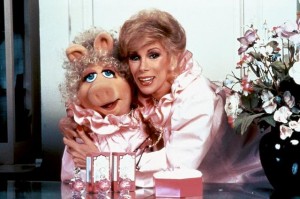 Comedian, actor, and one of the funniest people in Hollywood Joan Rivers has passed away at the age of 81.

In addition to all of her memorable TV and film roles, she crossed paths with the Muppets over and over throughout her career.  In honor of the great Ms. Rivers, let’s look at her powderpuffs, feuds, and can-we-talks with the Muppets.

Here’s where it all began.  In one of the funniest, craziest scenes in Muppets Take Manhattan, Joan Rivers cheers up Miss Piggy by giving her a makeover.  First it’s funny because we’re seeing her put makeup on a lady pig. Then it’s funny because she’s totally ruining that (very expensive) puppet.  And then it’s hysterical because they are both acting like mental patients who fell into a barrel full of clown makeup.  Perfectly classic. 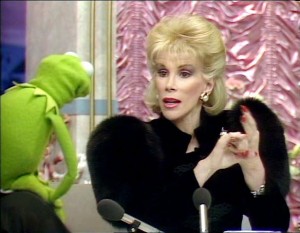 Not too long after Muppets Take Manhattan, Joan Rivers got her own talk show, titled Joan Rivers: Can We Talk?  The answer was: Yes, but only for six episodes.  And that was despite the fact that she had Jim Henson and Kermit the Frog on the very first episode of the show, along with Barry Manilow, Peter Cook, Dame Edna Everage, and Muppet Show guest star Twiggy.  I’ve personally never seen this talk show appearance, but the Muppet Wiki tells me that Joan questioned Kermit about his sex life.  So, you know, that happened. 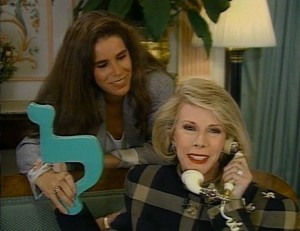 Joan and her daughter Melissa appeared together in an episode of Shalom Sesame, in which they call in to the “Aleph-Bet Telethon”.  Joan wants to donate Melissa’s Lamed (which is like the letter L, but a little more Old Testament), which excites everyone’s second-favorite grouch Moishe Oofnik, because Lamed begins the word “lo”, the Hebrew word for “no”.

It was over 20 years before Joan would work with a Muppet again.  In 2012, Miss Piggy appeared on Joan’s TV show Fashion Police on E!  In the appearance, Joan calls Piggy a bitch and a streetwalker, while Piggy makes fun of Joan’s plastic surgeries and lack of dignity.  If there was only a powder-puff within arm’s reach, it would be Muppets Take Manhattan all over again.

To promote Muppets Most Wanted In a totally real thing that actually happened, Joan Rivers and Miss Piggy got caught on film, TMZ-style, in a shoving match, which resulted in a face-full of cake.  Of course they knew, this meant war!

The fight led to this: A retrospective of Joan Rivers’ (fictional) history with the Muppets.  There are some great gems in there, and I’d love to see a full E! True Hollywood Story version of Joan trying out for The Muppet Show and Piggy’s lame attempt at standup comedy.  But more importantly, it serves as a great spotlight to the relationship Joan had with the Muppets, because there’s still a lot of truth in the fiction.  And that’s something both Joan and Miss Piggy know a lot about.

You’ll also be glad to know that Joan and Piggy officially made up during a live QVC broadcast (around the 2-minute mark above).  See?  Friends ’til the end.

Click here to help us remember Joan Rivers on the ToughPigs forum!