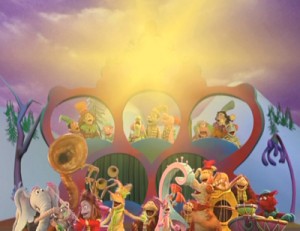 You know Christmas and Hanukkah and Kwanzaa and the Festival of the Bells and Refrigerator Day.  But do you recall the most famous winter holiday of all?

Jingle Day is celebrated on the shortest day of the year (just like some other well-known holidays you may have heard of) by the cast of The Wubbulous World of Doctor Seuss.  The Henson-produced show may not be as well-known as your Fraggle Rocks and Sids the Science Kid, but it effectively invented an entire universe filled with mythologies and a long history of its own.  One that not only redefined the meaning of Christmas, but gave its viewers a newfound hope for our future. 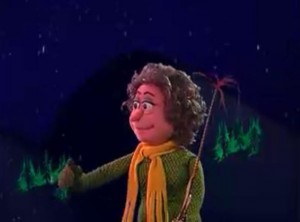 “Mrs. Zabarelli’s Holiday Baton” was the first episode of The Wubbulous World of Dr. Seuss I’d ever seen.  Whatever my expectations, I didn’t know I was in for an experience bordering on the religious.

The episode begins with our omnipotent and narrator The Cat in the Hat explaining the true meaning of Jingle Day.  You see, every year, Mrs. Zabarelli puts on a pageant that culminates when the youngest member of the tribe “tinks the tink” (it’s like a triangle, but, like, way more epic).  The tink does the impossible and alters the course of nature itself to bring about the end of winter and the beginning of life itself, forcing the sun to rise again after what we can only assume was months of total darkness.  As you can tell, the tink is not something to be taken lightly.

Little Annie DeLoo bears the awesome responsibility of tinking the tink, and she manages to put the entire world at risk from her brief case of stage fright.  But not to worry, Mrs. Zabarelli puts her to ease so she can follow through with her task.  The seasons change once more, and all is right with the world.  For now.  Or is it???  To be continued!  (Maybe.) 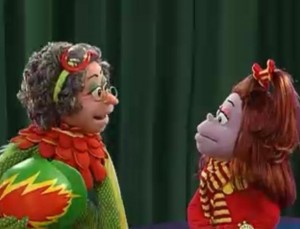 You see, Little Annie DeLoo doesn’t stay little for long.  Years pass, and Regular-Sized Annie DeLoo is still working hard on the annual pageant, most likely because she feels the overbearing weight of guilt for almost causing that cataclysm as a child.  When Mrs. Zabarelli decides to quit running the pageant in favor of riding her unicycle or something, she hands the baton to Annie DeLoo.  Of course, Annie’s history of insecurity completely overwhelms her holy duties.

After a disastrous rehearsal, in which kangaroos and foxes and moose do whatever they can to sabotage the natural order, Annie DeLoo is left with no cast (save two elephants) and an empty audience.  Despite these unbeatable odds, the show goes off without a hitch, and Morton the tiny (and, I have to admit, really adorable) elephant tinks the tink to successfully bring warmth back to the Dr. Seuss universe.

It’s a tale as old as time.  It’s a story that doesn’t need the titular “Mrs. Zabarelli”, nor her Holiday Baton, at its epicenter.  No, the story is driven by the plucky Annie DeLoo and her quest to set right what once went wrong (or… maybe to set right what goes right every year like clockwork).  Maybe a better title would’ve been “Annie DeLoo and Her Quest to Bring About the End of Winter Against All Odds”.  But I digress.  A lot. 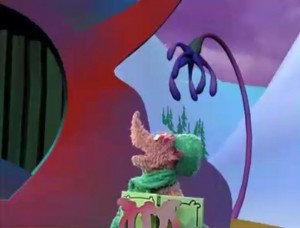 Of course, with Jingle Day as the local winter solstice analog, the obvious question is: Do they know it’s Christmas after all?  This being an alternate universe where elephants can roller skate, we could assume that the holidays are one and the same.  But in a particularly memorable scene, a small creature reads a passage from his scripture for the pageant.  That passage?  How the Grinch Stole Christmas.  So both holidays exist in the Seussiverse, but Jingle Day naturally takes precedence.  Presents are great and all, but getting the sun to rise is pretty dang important.

There is a moral at the end of this story.  And it’s the same moral repeated at the beginning and middle too.  That moral is that you can do anything if you try.  You can tink a tink, conduct a pageant, ride a unicycle, and make the sun rise.  It’s good that kids are learning that they can toy with the laws of nature if they just put their minds to it. 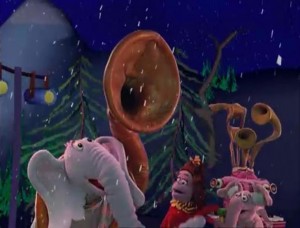 The other half of the moral is that everything must move forward, as the sun must rise in the east (or, whichever direction the Jingle Bell stage happens to be facing).  Mrs. Zabarelli knew this all too well, as she recognized her own mortality and passed her responsibilities along to Annie DeLoo before her inevitable death (yeah, we all know what unicycling is a metaphor for).  Annie knew it too, as the epilogue to the story showed her as an old woman handing the baton to a new, younger conductor.  Time continues to march forward, and there is only one constant left.  The Cat in the Hat.  The Cat appears unchanged and unaged from Annie’s debut as the tinkerer to Annie’s elderly exit.  And so we’ve learned that even the most basic of natural laws have loopholes.

Happy Jingle Day, every one! 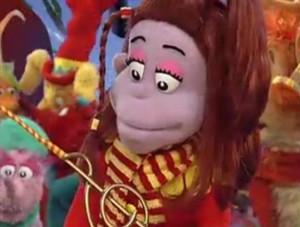 Click here to tink your tink on the ToughPigs forum!

It’s STILL A Christmas Together: Watching John Denver and the Muppets