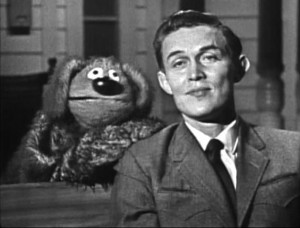 A few years back, we were surprised with a few episodes of The Jimmy Dean Show on DVD.  We took a lot of notice, not because we’re a fan of his singing voice or his sausages (okay, we’re pretty big fans of his sausages) but because that meant that we’d be seeing more classic Rowlf the Dog sketches.  Now it looks like it’s happening again!

The 3-DVD set of The Very Best of The Jimmy Dean Show is now available through Jimmy Dean’s website.  And yes, Rowlf is confirmed to be on the set.

Rowlf gets a special mention amongst the other celebrity stars on the site, and if you click on him you’ll hear Rowlf and Jimmy sing “Mention My Name in Sheboygan.”  Assuming that’s one of the sketches included on the DVD set, it may mean that the same episodes from the previously released “Best of Jimmy Dean” DVDs are in this set.  However, only two of those discs were ever released and the new set boasts three, so we’re counting on some new (to us) Rowlf stuff.

Many thanks to ToughPigs pal Jesse Oliver for the info! Click here to sing with the sausage man on the ToughPigs forum!

More Ways to Watch The Muppets