Slam poetry and Muppets are not two things that you would think necessarily go together.

In its ever growing popularity, poetry slams have become a wonderful outlet for people to express themselves in a public and creative format. It’s transformed into a way for voices to be heard, opinions to be shared, and important statements to be made. Often, slam is tied in with messages of politics, equality, depression, abuse, and trauma; poems that address these matters are often powerful and inspirational.

Even so, there are many poets who tend to write poems that have a funnier and/or nerdier take on life – and I just so happen to be one of them.

One of the first spoken word poems I ever wrote was “Where The Fraggles Roam“, which garnered me a bit of attention when I first joined the Muppet community. I wanted a chance to express my love of all the work Jim Henson created in his lifetime, and slam poetry seemed a good way to go about it.

While still one of my favorite pieces, I recently felt that “Fraggles Roam” no longer showcased the skills I’ve gained as a poet over the years. So I rolled up my sleeves, cracked my knuckles, and started brainstorming different angles for a new poem. Soon enough, I found myself with one of my best friends in my bedroom one afternoon with a camera, a newly memorized poem, and a handful of my personal Muppet merch. Here was the outcome:

I wanted to write a piece that covered the basic history of Jim’s life, as well as describing the sort of man he was – but with a personal flare. I’m hardly the first to tap into the idea of Kermit’s farewell to his creator (Tom Smith’s ‘A Boy and His Frog‘ is untouchable in the feels department), but I hoped that my writing would convey how much Jim’s work has meant to generations upon generations of people. Not to mention the tie-in with Matthew Soberman’s In Memory of a Coat is a nice touch!

What else can I say? That Jim Henson was a swell guy. He deserves all the recognition for the beautiful work and wonderful worlds he created in his lifetime. Goodness knows I’m not the first person to try, and I certainly wont be the last.

And who knows? Maybe next I’ll do a Fozzie persona piece. Or Janice! People would be down for a Marvin Suggs poem, right? So much untapped Muppet poetry, guys! 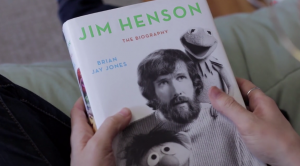 ((Huge thanks to my good friend Aileen Sheedy, co-owner of Pencil Ink Productions and show runner of The Misslethwaite Archives, for helping me create this video.))

Click here to slam some poetry on the ToughPigs forum!