There are two things that people who live on the internet really love: Inspirational quotes, and sharing things without taking a moment to ponder where they came from. 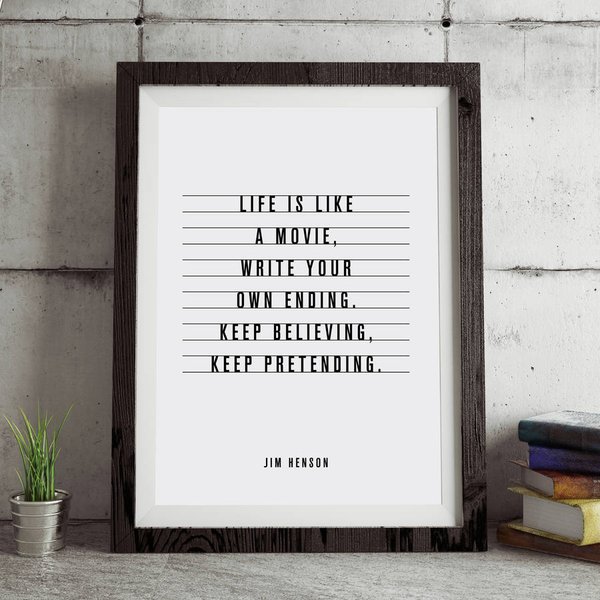 Jim Henson!  I like that guy!  It’s a lovely quote, isn’t it?  Here’s another take on it from a Pinterest user: 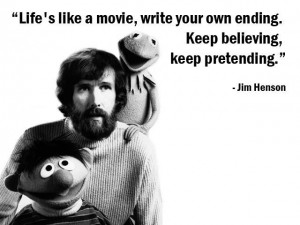 This one has Jim and some Muppets on it!  That’s neat.  Sometimes these things have though-provoking imagery, but sometimes they actually feature Jim himself.  They’re all pleasant enough, and yet, these two images immediately set off my Someone Is Wrong on the Internet Alarm.  If you’re a nerd like me, you may have already figured out why.  Unless there’s been a rule change I haven’t heard about, when you attribute a quote to a particular person, it means that particular person is the guy or gal who wrote or first said the thing being quoted.

“Life’s like a movie, write your own ending” is, of course, a line from the reprise of “Rainbow Connection” from The Muppet Movie (MAYBE YOU’VE HEARD OF IT?), and like all the songs in that film, it was written by Kenny Ascher and Paul Williams, neither of whom are named Jim or Henson.  It strikes me as pretty funny that Jim Henson is getting credit for a lyric about writing your own thing, and he didn’t write it.  (Is that ironic? I think, maybe?  I don’t know if that word means anything anymore.)

There’s this weird thing  (We’ve covered it here before) where the general public knows that “Jim Henson is the guy who made the Muppets,” and so a lot of them leap to the conclusion that Jim was solely responsible for every aspect of every Muppet thing.

But in this case, although the line was sung by a character performed by Jim, as far as I know, he didn’t come up with it.  It doesn’t really count as a Jim Henson quote, any more than “The name on everybody’s lips is gonna be Roxy” counts as a Renee Zellweger quote.

A few images I’ve seen elsewhere on the internet take a different approach, like this one found on Pinterest: 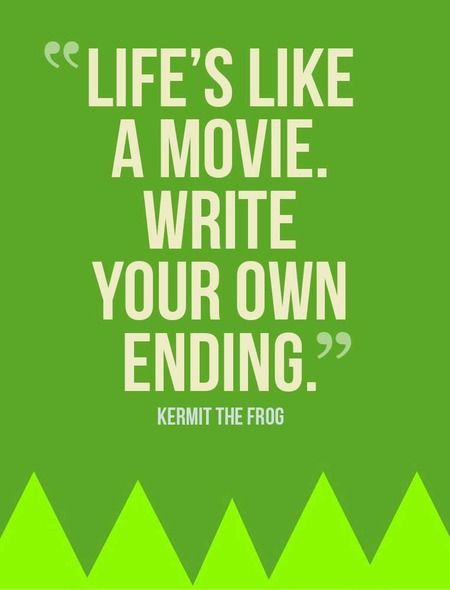 The collar is a nice touch.  And this one you can purchase as a wooden sign from a website called Sawdust City:

I’m going to go ahead and allow the ones that credit the lines to Kermit.  He sings them onscreen, after all.  That’s more like crediting Forrest Gump with saying “Life is like a box of chocolates.”  The movie protagonist Forrest Gump didn’t actually come up with that in real life (Nor did his Mama, even), but everyone understands that a fictional character is not actually capable of crafting wise sayings.

Which is why this one from Imgur feels the wrongest of them all: 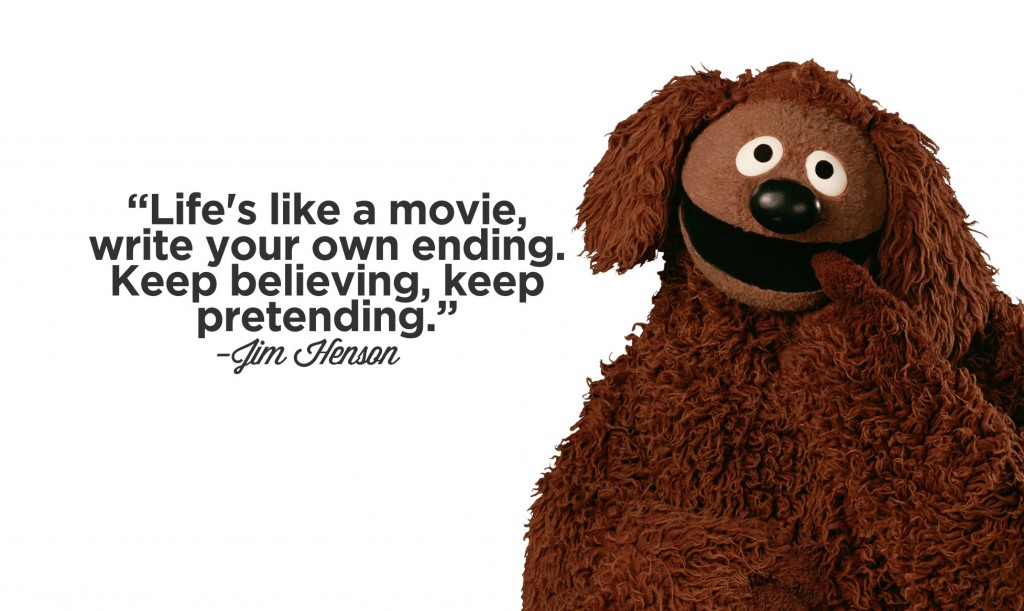 The phenomenon of well-intentioned Jim Henson misquotes doesn’t end with “Life’s like a movie.”  Take a look at this one I saw on Reddit (You can click to make it bigger): 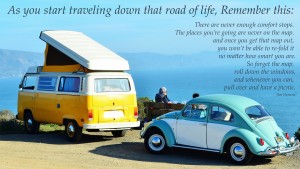 That’s cute, but I couldn’t imagine when Jim would have actually said it.  I did some Googling and managed to trace it as far back as It’s Not Easy Being Green and Other Things to Consider, a 2005 collection of poignant Henson-related quotes, but I suspect it comes from something earlier.  Kermit’s books One Frog Can Make a Difference and Look Before You Leap are likely contenders.  Or maybe that commencement speech he did.  Also worth noting: The original quote ends with “…have a picnic with a pig.”  I have no idea why the creator of the above picture didn’t consider pignicking worthy of their romantic road-trip imagery.

So, yeah.  There are a lot of “Jim Henson quotes” floating around out there that Jim didn’t write, and sometimes they’re lines he never even delivered out loud.  As long as we’re on the subject, here are some other profound lines not written by Jim Henson.  Tell your friends:

That should help clear things up.

But if you’re going to create profound, share-worthy images using quotes by Jim’s characters and credit them to him, why stop with Kermit?  I mean, you could do it with any line spoken by any Jim character.  Like this: 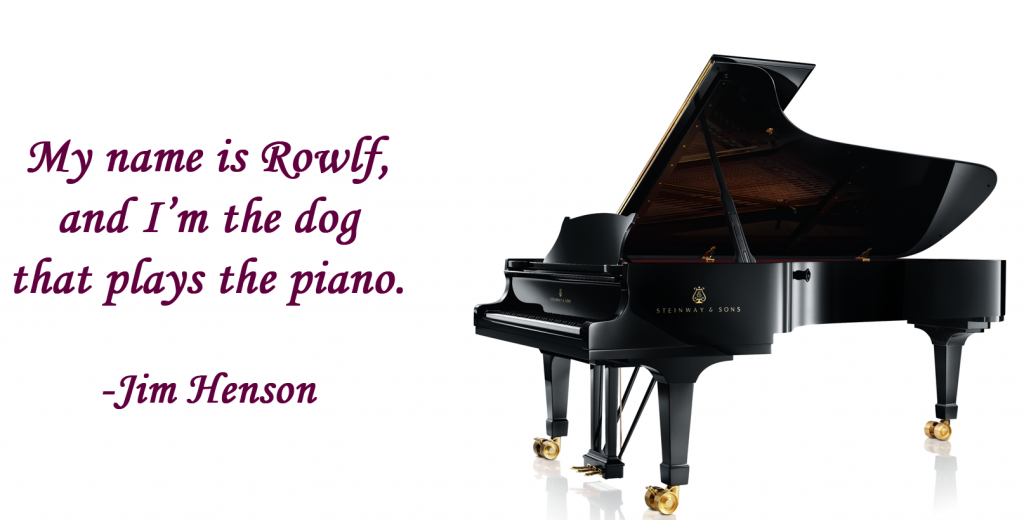 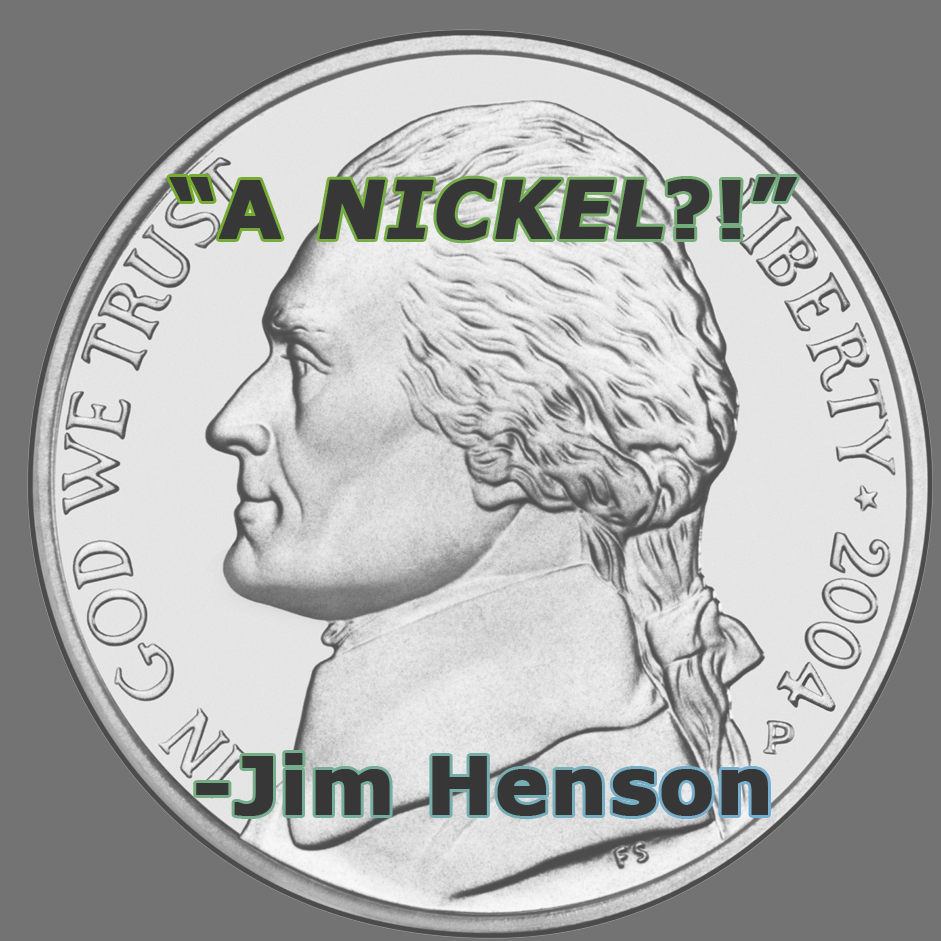 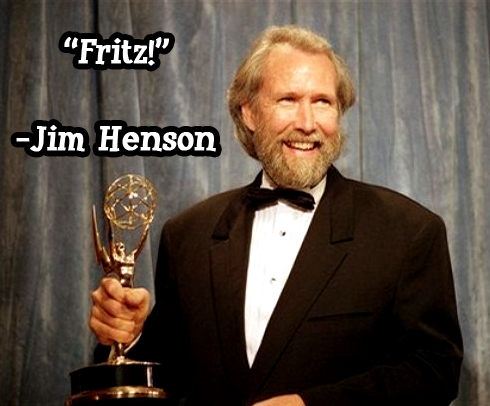 Going even further now, here’s a weird one from the website AZ Quotes:

What the heck?!  When did Jim Henson say that?  What kind of interview was he doing, or what kind of book was he contributing a foreword to, where it was relevant for him to talk about breaking somebody’s limbs?

Using my incredible sleuthing skills, I’ve determined that this one is a Miss Piggy line — not even a Jim Henson-performed character!  My best guess on the source of the joke is Miss Piggy’s Guide to Life (written by Henry Beard), but I wouldn’t bet Jim’s snazzy gray jacket on it.  If you happen to know, please let me know.  And then we’ll both know.

But Jim Henson said a lot of things in his life.  We should be sharing real, authentic Jim Henson quotes!  That’s why I made the following images based on words verifiably spoken by Jim himself.  Please share them on Facebook, on Twitter, on Tumblr, on Pinterest, on Reddit, on Instagram, on — dang, there’s a lot of social medias these days.  Anyway, here they are: 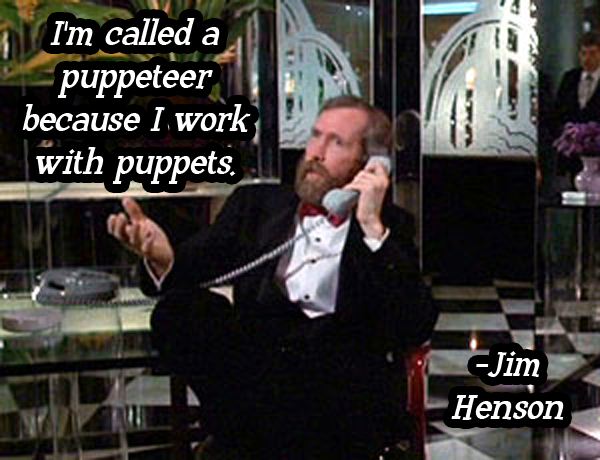 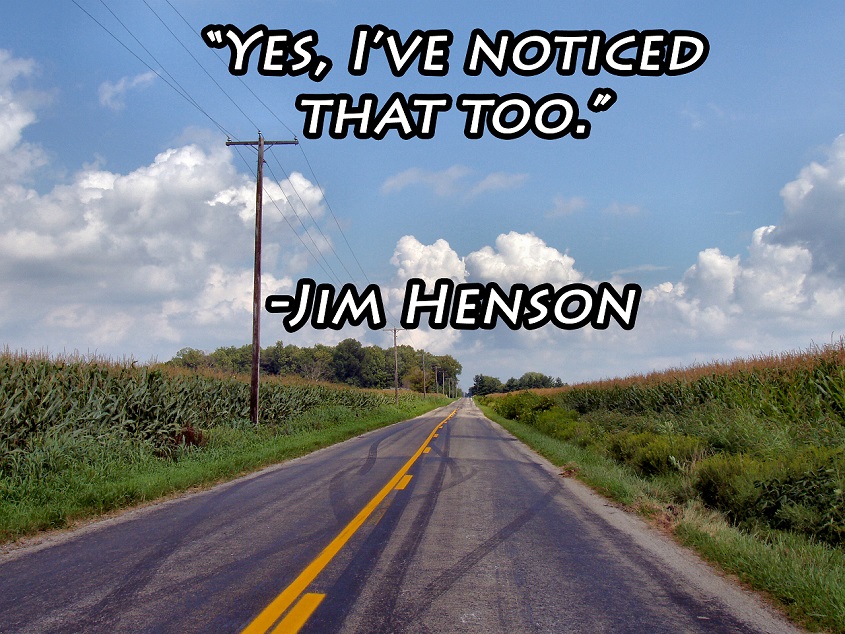 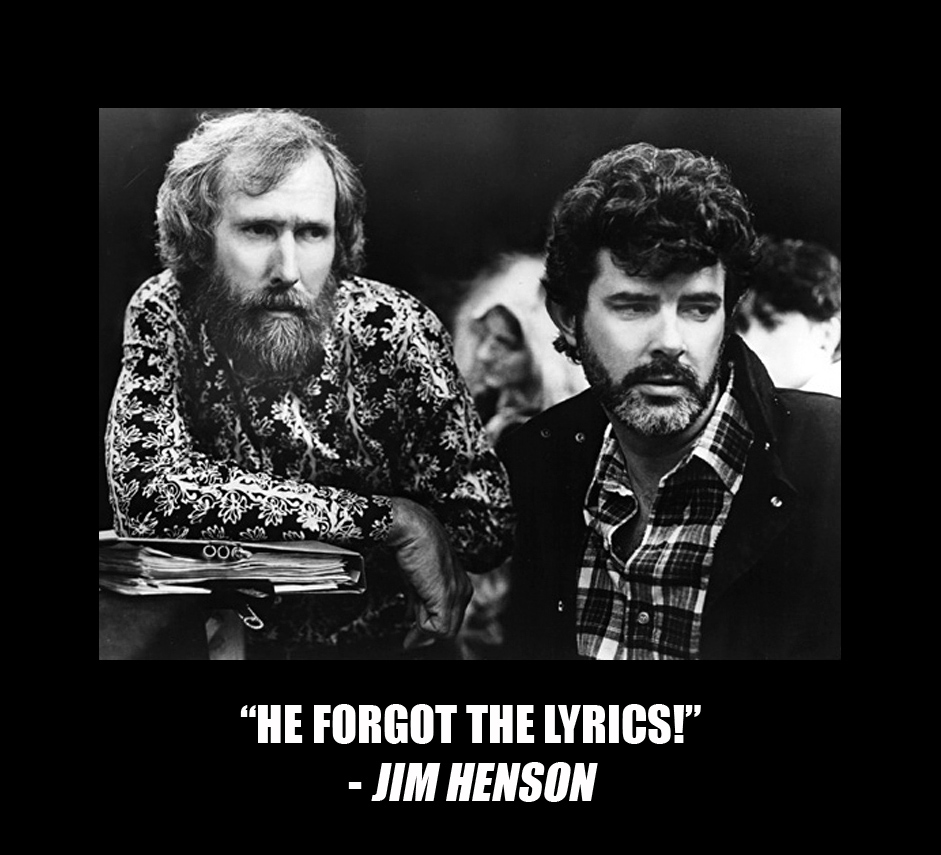 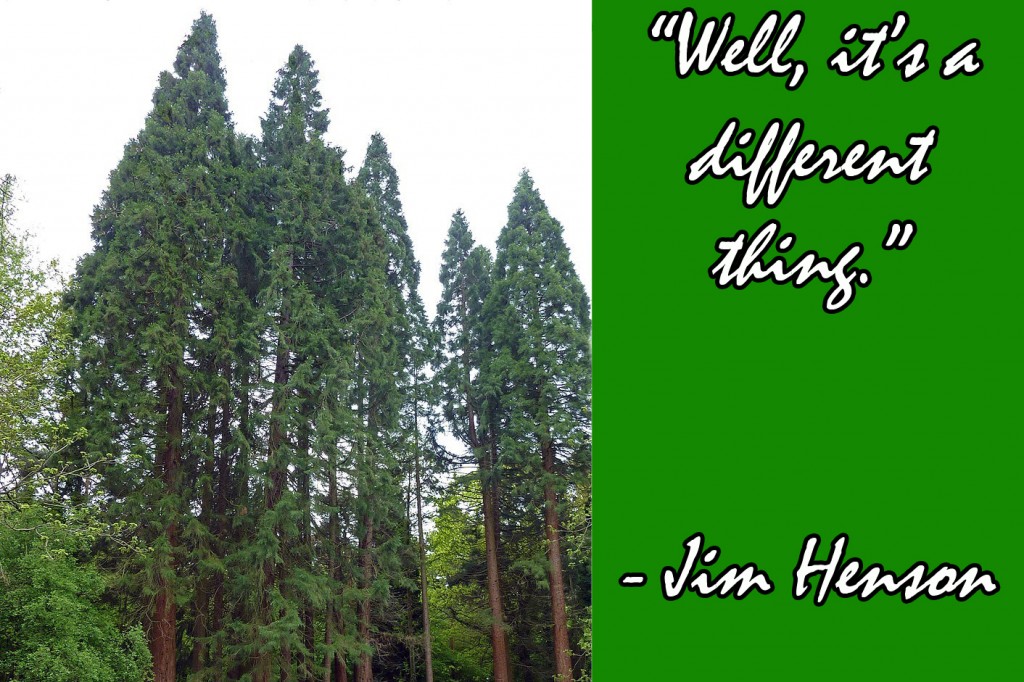 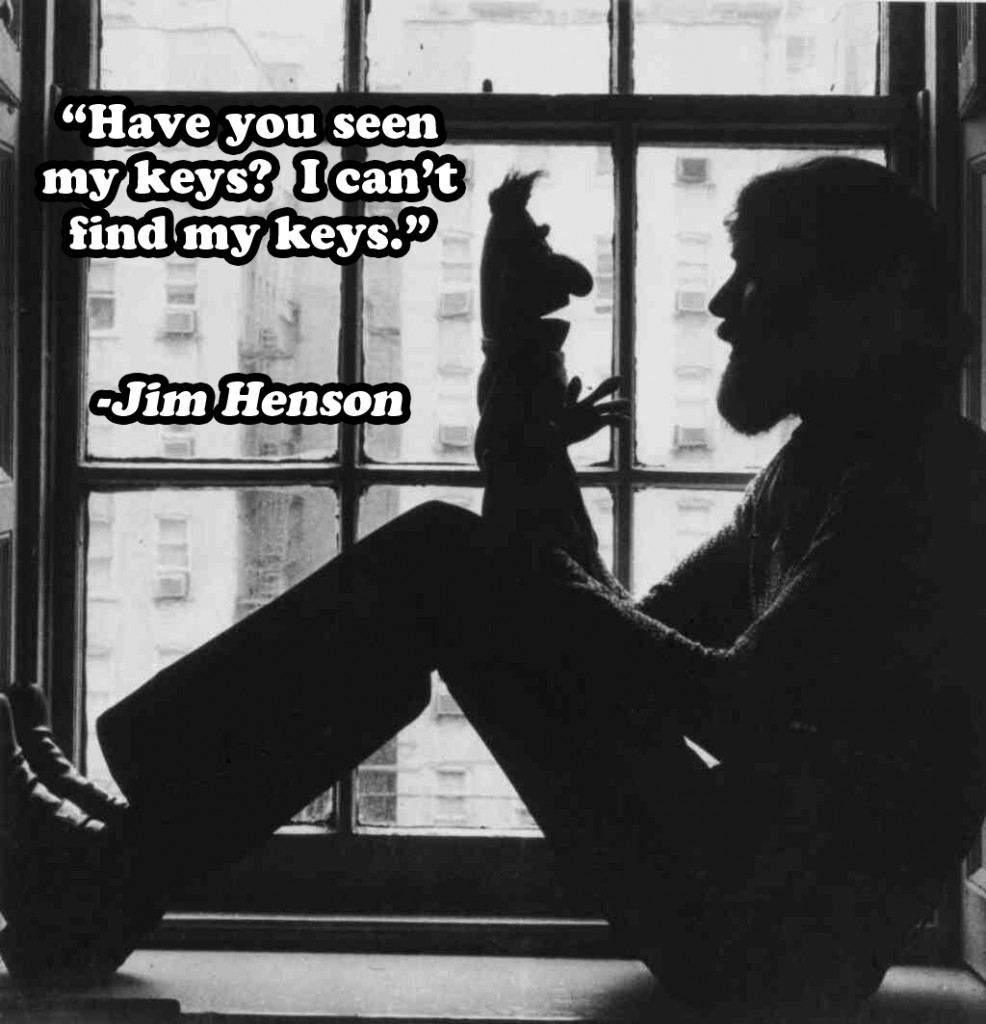 Source: A time when Jim lost his keys, probably

My apologies to anyone who made one of the images I dissed.  Click here to write your own ending on the Tough Pigs forum!