While trying to figure out how to best honor Jerry Nelson’s memory, I keep coming back to his work in Muppet Christmas Carol, the brightest spotlight he ever got as a Muppet performer.

Like Danny touched upon in his piece earlier this week, Jerry’s characters mark the dividing line between casual and hardcore Muppet fans. With a few exceptions (The Count mostly, and maybe Herry, Floyd or Robin), Jerry didn’t have main characters on Sesame Street or The Muppet Show. He played the kinds of roles that get us nerds excited, but that most people might recognize but couldn’t name – Dr. Strangepork, Crazy Harry, Frazzle, Biff, and so on. If you’re reading this, I’m sure you can name a couple dozen more.

On the actual TV shows, Jerry got plenty of time to shine. As my wife and I have binged on Muppet stuff this weekend, I’ve continually been in awe of his apparent omnipresence. Jerry’s all over the place, starring in some sketches and playing minor roles in others. Very often, he did both of those things in the same scene.

Sadly, that prominence didn’t translate to the Muppet movies made during Jim Henson’s life. Oh, sure, Jerry has some nice scenes in all of them. Floyd tries to keep Animal under control in The Muppet Movie. Lewis Kazagger announces the climactic battle in The Great Muppet Caper. Lew Zealand is funnier than Scooter in Scooter’s big Muppets Take Manhattan scene. The Count cackles through (and calls Joan Ganz Cooney “Mom” during) the closing credits to Follow That Bird. Nice bits, but there aren’t enough of them.

And that’s understandable. The movies have a limited running time, which they need to devote to telling a story. Consequently, they have to focus on the smaller group of core characters. All of the great Jerry moments I mentioned above happen on the fringes of the story, almost as though they snuck in without permission.

With The Muppet Christmas Carol, that finally changed. The Muppet family had lost two of its best performers in Jim Henson and Richard Hunt, and Frank Oz wasn’t around as much as he had been. Along with Steve Whitmire and Dave Goelz, it fell to Jerry to carry on the Muppet legacy in a frightening new era. 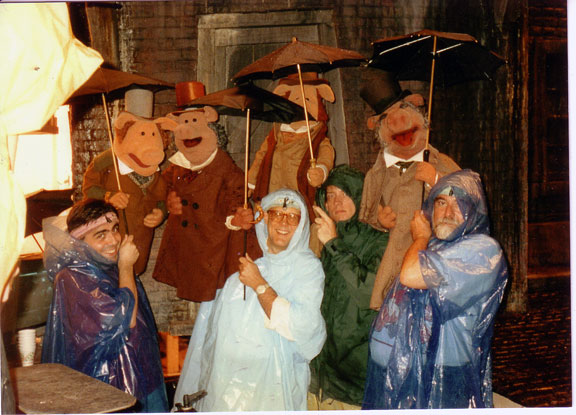 And boy, does Jerry ever come through with flying colors! In the film, he plays his usual assortment of supporting and cameo roles (Droop! Pops! Emily Bear!), but he also plays three key characters – Robin as Tiny Tim, Statler as Jacob Marley, and The Ghost of Christmas Present.

I feel that bears repeating, if just to dwell on Jerry Nelson’s versatility for a moment. He played Tiny Tim, Jacob Marley, and The Ghost of Christmas Present in the same adaptation of A Christmas Carol.

And when you watch the movie, you don’t even notice or think about it. There’s nothing showy or egotistical about his work. The three characters are astonishingly different, and he plays them all perfectly. Even more impressively, he came into the movie with differing histories regarding each of them. Let’s look at each one individually. 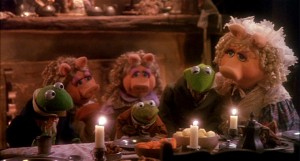 Of the three, Robin is the only established Jerry Nelson character. Prior to Christmas Carol, he definitely suffered from being less prominent in the movies than on the TV show. He has a nice little part in The Muppet Movie, but he’s completely absent from the other two (what does a reporter or a broke playwright need a nephew for?)

But with Kermit as Bob Crachit, Robin was the only possible choice for Tiny Tim. Jerry had long excelled as playing upbeat young characters (see also: Farley, Gobo, Emmet Otter), and Tiny Tim is one of the most upbeat in literary history. Jerry’s youthful enthusiasm is so genuine that you completely forget that Tiny Tim is actually a 58-year-old with a beard.

That same enthusiasm makes the film’s darkest material bearable. “Bless Us All” – the last of Jerry’s three big numbers in the film – is essentially a song about a little kid accepting that he’s going to die soon. But Robin sounds so content as he sings it that I never feel sad. I buy into Tiny Tim’s optimism because Jerry makes me see the world through his eyes. 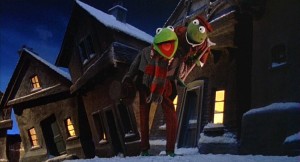 One final note about Tiny Tim: The brief reprise of “One More Sleep” gives Jerry another chance to scat with Steve Whitmire, which they also did over the closing credits of Fraggle Rock. I’ve always been so glad that the filmmakers managed to make room for it here. 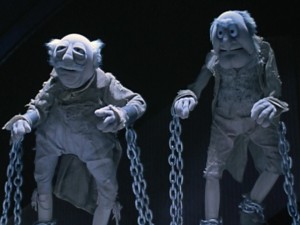 In many ways, Marley is the opposite of Tiny Tim. Where Tiny Tim is optimistic in the face of impending death, Marley is grumpy and pessimistic years after his worthless life has ended. It’s exactly the kind of role you’d expect to be played by a 58-year-old with a beard.

But Jerry isn’t simply playing Jacob Marley here. He’s also playing Statler, who has to be recognizably the same character that viewers knew from other Muppet productions. That isn’t really as easy blend to achieve. While Marley is a grumpy old man in the book, he’s also a repentant one, and his role in the story is to offer helpful advice. He tears Scrooge down, but he does so for the purpose of forcing him to build himself back up. Statler and Waldorf had never offered so much as a positive word, and now they were tasked with delivering the positive message of an entire film.

So Jerry and Dave Goelz had a hard job, and it was made even harder by the fact that this was their first time playing Statler and Waldorf. (Jerry did introduce the character of Statler in The Muppet Show: Sex & Violence, Richard Hunt played him on The Muppet Show proper and all other productions through 1991.) It’s made harder still because they’re actually playing the ghosts of characters who had been originated by their dead friends. I can’t imagine what kinds of feelings the two of them must have been experiencing during that shoot.

But it’s a testament to their skill that the two pull it off incredibly well. When I was a kid, it never even occurred to me that the characters had been recast. Now I can hear the difference vocally, but they capture the personalities perfectly. This is Statler and Waldorf, no question. Even though they have more dramatic material than usual, and even though they’re up and moving around in a way they never had before, they’re completely familiar.

We all knew Jerry was a man of a thousand voices, but this was the first time we’d seen him inhabit a character originated by one of his colleagues. 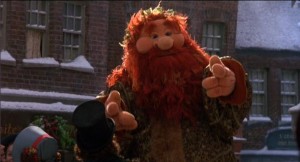 The Ghost of Christmas Present

Jerry’s third major character is a completely new creation – the Ghost of Christmas Present. MCC gets a lot of criticism from some fans for being too faithful to the book (and therefore not Muppet-y enough). Others, including me, love that about the film. But Christmas Present is the one element that often pleases both camps equally. This is the same jolly bearded fellow described in the novella, but unlike the other two ghosts, he’s also unquestionably a true Muppet. And that’s largely due to Jerry’s boisterous, joyful performance.

MCC can be a pretty grim movie, with the Christmas Past sequence growing increasingly depressing as it goes on. Then Christmas Present shows up to give it a huge shot in the arm. The moment he sticks his giant head into Scrooge’s door frame, the movie comes roaring back to life. We’ve never seen this guy before, but he wouldn’t be so out of place on Fraggle Rock.

Jerry had never played a character quite like him before. Over twenty-five years into his Muppet career, he was still capable of developing a totally new personality. He plays the ghost as a fellow who has only one shot at experiencing Christmas – who’s been waiting all year to follow in the footsteps of his eighteen-hundred brothers – and is positively ecstatic to finally watch it all unfold.

And that ecstasy is infectious. Few things in the world fill me which as much holiday spirit as “It Feels Like Christmas.” I’m a well-known Christmas enthusiast anyway, but I get that song in my head nearly every time I start to feel impatient for the holiday (which happens at least once a week). Jerry Nelson makes me feel bad for Marley and Tiny Tim, but he makes me want to *be* the Ghost of Christmas Present.

Speaking of singing, all three of Jerry’s major characters have lead or co-lead vocals on a song in Muppet Christmas Carol. Before this, the closest Jerry had ever come to singing lead in a Muppet movie song was that one verse of “Can You Picture That?” Here he gets to really demonstrate the range of his talent, hopping from the darkly comic “Marley and Marley” to the soft and sweet “Bless Us All” to the soaring “It Feels Like Christmas.”

It really does seem unthinkable that they’re all sung by the same man. But Jerry Nelson spent his entire career quietly accomplishing the unthinkable, and Muppet Christmas Carol is his all-time greatest showcase.

Click here to stand in the Tough Pigs Forum with your little frost-bitten teddy bear. 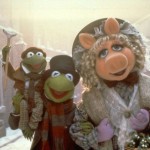