What Exactly is the THAT in ‘Can You Picture That’? 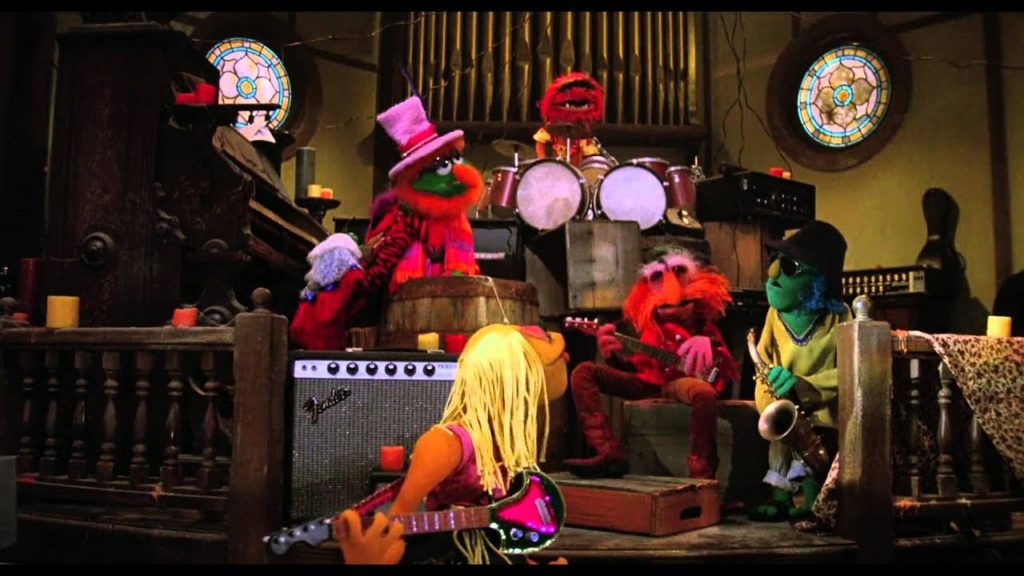 Golden teeth and golden tones, welcome to my utter confusion of the meaning behind this song!

In spit-balling ways to celebrate the 40th anniversary of The Muppet Movie, one idea that was thrown out was the simple question: What exactly is the THAT in the song ‘Can You Picture That’?

For whatever reason, this idea instantly fascinated me. I love this song and have never actually been able to suss out what the heck it’s about – then again, I’ve never had a reason before to sit down and dissect it piece by piece (and I will admit, it’s been a hot second since my last listen, so it felt like a good excuse to reacquaint myself with the number).

I went straight to my iTunes and listened through the song multiple times, along with pulling up the lyrics to read along. After three listens, I came to this first conclusion: this song makes so very little sense, but it’s still catchy as all get out.

Before proceeding, give the song a listen with this way too psychedelic video:

So yeah, from an outsider’s perspective, this song is a whole lot of nonsense. But I’m an English major, so let’s finally put that degree of mine to good use. Let’s break up this song into five parts, analyze what the THAT means in each section, and then conclude what is the overall THAT.

Dr. Teeth:
Everybody’s lover, everybody’s brother, I wanna be your lifetime friend.
Crazy as a rocket, nothin in my pocket, I keep it at the rainbow’s end.
I never think of money, I think of milk ‘n honey, grinnin like a cheshire cat.
I focus on the pleasure, somethin’ I can treasure, can you picture that?

Right off the bat, Dr. Teeth paints us an image of someone who is everybody’s “lover,” “brother,” and “life-long friend.” From this image, we can discern a really laid back, likable dude (Dr. Teeth himself? It’s hard to tell at tim 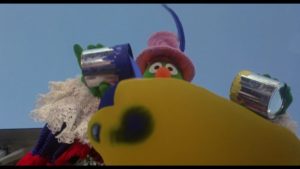 es if the song is the Mayhem’s own personal narrative or just a song they’re performing – probably a combination of the two).

“Nothin’ in my pocket” denotes that this person is broke, saying that his money is “at the rainbow’s end” – so nonexistent. This is followed by him telling us how money isn’t an issue that he thinks of. The “milk and honey” bit conjures the description of the Promised Land from the bible; our protagonist of the song wants an ideal life, which is then only reinforced by the line “I focus on the pleasure.”

So, for this first part, the THAT is: can you picture someone who doesn’t care about money in the slightest? Can you imagine someone who’d rather think of the bigger picture, have people like him for who he is, and be poor than get caught up in our capitalistic society?

Wow! So deep, Electric Mayhem! Next verse! Hit it, Floyd!

Floyd:
Let me take your picture, add it to the mixture, there it is I got you now!
Really nothin’ to it, anyone can do it, it’s easy and we all know how.
Now begins the changin’, mental rearrangin’, nothing’s really where it’s at,
Dr. Teeth:
Now the Eiffel Tower’s holdin up a flower.
I gave it to a Texas cat!

I’ll point out now, as you might have already noticed, that there is no THAT in this section, but let’s still explore this part so we can paint a better definition of the whole song at the end. 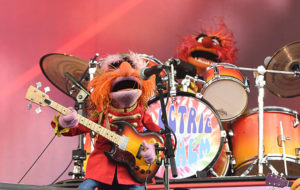 Floyd wants to “take your picture” – he could mean with a physical camera, but I’m guessing he means take a picture with his mind, thus adding it “to the mixture” of all his other mental pictures (or, using regular vocabulary, memories!). The lines “anyone can do it” and “we all know how” is probably meant to be a notion that we should all savor each moment – enjoy every memory. But wait! Taking mental images can be tricky because the mind, after time has passed, likes to play with our memory! Hence the line “now begins the changin’, mental rearrangin’, nothing’s really where it’s at.”

And then this last part… I have no idea. I guess the idea of the Eiffel Tower “holdin’ up a flower” and then Dr. Teeth giving that flower to a “Texas cat” is in terms of memory’s changing and playing tricks on you? Maybe?

Floyd & Janice:
Fact is there’s nothin’ out there you can’t do
Yeah, even Santa Claus believes in you.
Dr. Teeth:
Beat down the walls, begin, believe, behold, begat.
Floyd:
Be a better drummer, be an up and comer. Can you picture that?
Animal:
CAN YOU PICTURE THAT?!

Right, so, this is the bridge of the song, and it’s a rallying cry. Floyd and Janice remind us all that we can do anything, bringing about the idea that “even Santa Claus believes in you.” Teeth ramps up on that notion, giving us a lot of powerful B words. Beat down the walls – of 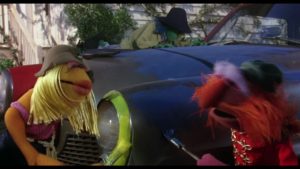 course! Begin – how else do we start things? Believe – Floyd and Janice already said they believe in you! Behold – you’ve gotta behold yourself in all your glory! Begat – You gotta… wait… is Dr. Teeth telling us to make babies??

I mean, yes, the dictionary also defines begat as “give rise to; bring about,” which I’m sure was the purpose of this word in the song, but also the main definition is 100% “bring (a child) into existence by the process of reproduction.” So… I dunno, I guess of all the Muppets, The Electric Mayhem are the ones who’d be all about the free love? After all, Dr. Teeth did mention in the first verse “everybody’s lover” which some begetting might be a consequence of. (I also can’t help think of Miss Piggy in John Denver and the Muppets with her “this one begat that one and that one begat the other one” spiel.)

Back to this song, Floyd rallies again with positivity, making it kind of personal with “be a better drummer” which I can only assume is directed towards Animal. After this statement is sang, we’re given another, “can you picture THAT?”

Onto the final verse!

Floyd:
All of us are winnin, pickin and a-grinnin, Lordy but I love to jam
Janice:
Jelly-belly gigglin, dancin and a-wigglin, honey that’s the way I am!
Dr. Teeth:
Lost my heart in Texas, Northern lights affect us, I keep it underneath my hat,
Aurora Borealis, shinin down on Dallas! Can you picture that?
Can you picture that?

This part is, by far, the hardest to pick apart for in-depth meaning. 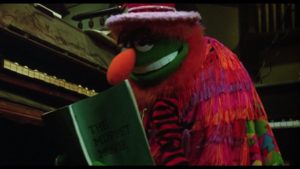 I mean, at first Floyd brings back those themes of positivity with the words “winnin” and “a-grinnin”. Okay, cool, makes sense and goes with the previous parts, but then I’m not sure where the “Lordy but I love to jam” comes into play. Is Floyd doing an aside mid-song? Like, he just loves to jam! So much! He has to let us know! Right now!

Janice states just how she is: Jelly-belly gigglin! Dancin and a-wigglin! That’s the way she is! And she’s so unapologetic about it! She’s owning herself! She’s believing in herself! You go, Janice!

And then Dr. Teeth comes in. I’ve gotta be honest, these Dr. Teeth’s lines are the ones that absolutely throw me. Texas comes back up twice, as well as the Northern Lights. As previously stated, Teeth gave the Eiffle Tower’s flower “to a Texas Cat,” but now in this part of the song he goes on to state “I lost my heart in Texas” and that the Aurora Borealis is “shinin down on Dallas.”

Like… what? What does any of this even mean? I have tried so hard to discern the meaning behind these two lines and I just can’t. I’ve come to the conclusion that Paul Williams was just flexing his rhyming muscles in this part. Maybe this is just a lie I tell myself to sleep better at night, but hey, I’ll take it.

So the THAT in this part? Uh, I guess those tones of positivity and believing in yourself still, and also something about losing your heart in Dallas to a Cat during the Aurora Borealis … ???

We’re in the home stretch, y’all. Just one more part to look at! 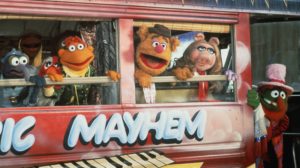 Okay, so, let’s ignore those last couple lines from the previous part and instead remember the themes of positivity throughout the rest of the song when looking at this last section.

You gotta see it in your mind – visualize personal success by believing in yourself! Having a mental image of your success is quick and easy to find cause it’s in your own head! You don’t have to buy a frame! Literally! Cause you can’t frame your own thoughts! Use it if you need it – all those positive thoughts! Don’t forget to feed it – don’t forget to be nice to yourself! This is about the extent of what I’ve gleaned here!

Okay, so now that we’re wrapped looking through the song, let’s review the THAT in each section:

So, while pretending that Verse 3 absolutely does not exist, I think we can all agree that the takeaway from this song is being positive about your place in life, not depending on money, and believing in yourself. The Mayhem paint an image of an ideal life: where money isn’t an issue, how we cherish our friends and the memories we make, and where we’re not bogged down by how society tells us to be. You can jam and wiggle and lose your heart in Texas and just be yourself, and damn if that isn’t alright. Can you picture that? Can you picture all of that?

A pretty great message – once you pay attention to the lyrics. 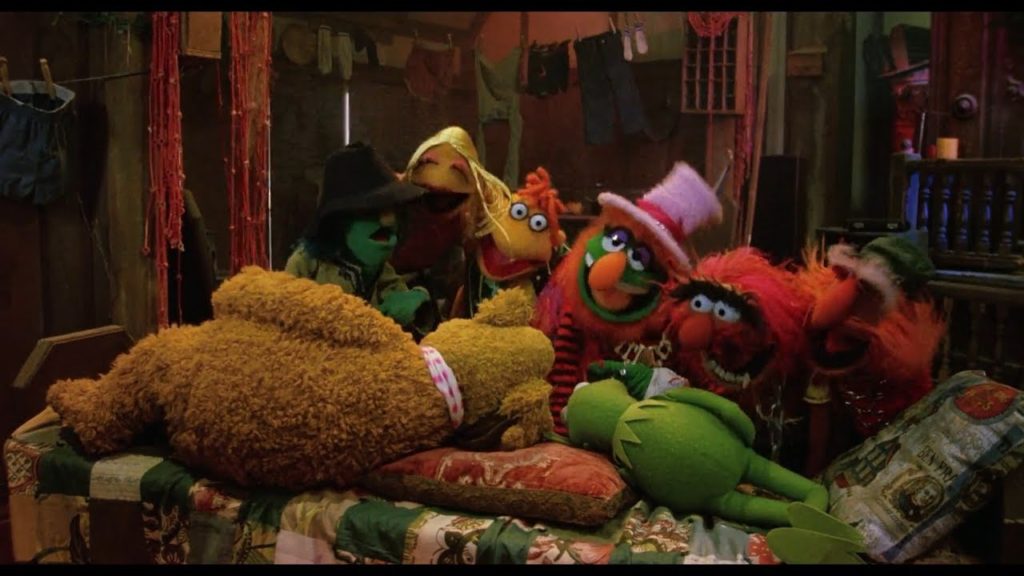 Click here to flex your rhyming muscles on the ToughPigs forum!

Crazy Fan Theory: The Muppets Die at the End of The Muppet Movie

Why Do They Always Come Here? – Bizarre Statler & Waldorf Theories

Yes, Muppet Continuity Exists, and I Hate It