This awards season, the Muppets received their first Academy Award nomination in 26 years.  That is not a typo.  And there is a very good chance that this Sunday, February 26, they will be walking away with their first Oscar (well, second, if you count the angry guy in the trash can).

It’s been a long road down the red carpet for the Muppets, so let’s take a look at their history with the Academy Awards, along with some video where available.

1966 – Time Piece nominated for Best Short Subject, Live Action Subjects.  It lost to Le Poulet, by Claude Berri, who then went on to create a multi-million dollar puppet franchise.  Oh wait, no he didn’t.

Also, Miss Piggy and Johnny Carson share a memorable moment (as seen below) introducing Kermit’s performance of “Rainbow Connection”, in which Miss Piggy laments her Oscar snub.  Heck, I’m sure we’re all lamenting it.

1982 – The Great Muppet Caper nominated for Best Original Song (“The First Time It Happens”).  It lost to “Arthur’s Theme” from Arthur, by Burt Bacharach (and some other less-famous people).  Little did we know that the criteria for winning this award was top hats and alcoholism.

1985 – The Muppets Take Manhattan nominated for Best Original Score.  It lost to Prince’s Purple Rain.  And 12 years later, the restraining order was dropped. 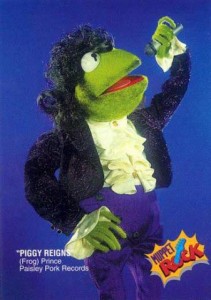 1986 – Kermit and Scooter present the award for Best Short Animated Film.  This video used to be online, but sadly, it was removed from the interweb.  So you’ll have to rely on my spotty memory.  The most memorable part was when Kermit and Scooter realize that, being rod puppets, they can’t open the envelope with the name of the winner inside.  After a brief cutaway to Statler and Waldorf in the balcony, a tuxedoed Jim Henson appears at the podium in Kermit’s place to call out the name of the winner.  Muppet magic: Simplified. 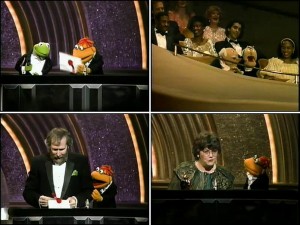 1996 – To be honest, I probably haven’t seen this clip since it originally aired.  Miss Piggy appeared via video to interrupt a conversation between host Whoopi Goldberg and Babe.  Once again, it was so she could vent her anger about not getting the Best Actress nomination.  And then she made a “Porkahontas” joke. 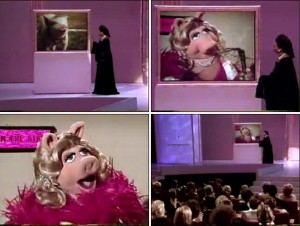 2011 – The Muppets nominated for Best Original Song (“Man or Muppet”).  It’s up against “Real in Rio” from Rio, which (thank Frog) is not very good.  As much as I hate to count my tadpoles before they’ve hatched, I’m gonna wager that “Man or Muppet” is a shoo-in to bring home the Muppets’ first Academy Award.

Also at this year’s Academy Awards: Kermit and Piggy will be presenting an award!  It’s not as exciting as getting to see them perform “Man or Muppet”, but I’ll take what I can get.  Especially if Piggy continues her streak of complaining about her lack of a nomination.

Click here to walk down the red carpet to the ToughPigs forum!