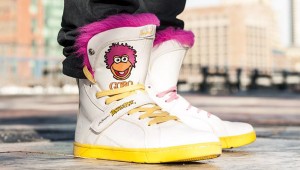 With the Fraggle Rock 30th anniversary right around the corner (kicking off on April 22: Earth Day), we’re going to start to see more Fraggle stuff in development over the next few months.  The first of which is furry, brightly-colored, and would never actually be worn by a Fraggle (because they don’t wear shoes, you see).

The folks at Heyday Footwear are developing a new series of Fraggle Rock-inspired shoes, starting with Gobo.  As you can see in the image above and the video below, they’re bright and lined with Gobo’s hair (weird) and probably not meant for playing golf or soccer or anything.  As the Heyday CEO says (many, many times) in the video, the shoes are “dope”.  They will also cost you $125 per pair, so you’ll really have to want them.

Click here to scalp a Fraggle on the ToughPigs forum!

You’ll Get a Kick(starter) Out of These Sprocket Shoes