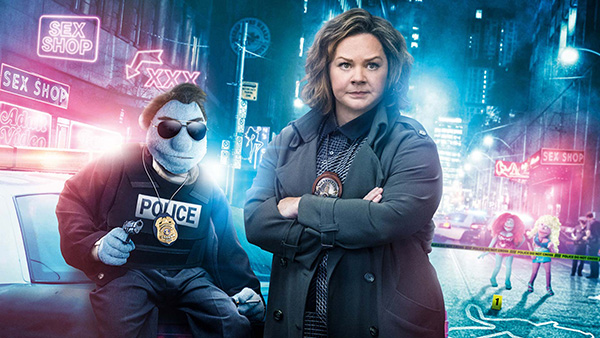 Well, they did it.  After a lifetime of development, The Jim Henson Company finally completed and released the film believed to be Brian Henson’s baby.  Of all the unfinished projects in the Muppet universe, this is the one that got to see the light of day.  What a shame.

The Happytime Murders, which premiered this weekend, is a strange combination of Henson history (featuring scads of puppets and fascinating filmmaking techniques) and an anti-Henson sensibility (raunchy humor, which is familiar territory for the Henson Alternative brand, but absent from Jim Henson’s own oeuvre).  It’s a mixture that doesn’t sit well.

I previously wrote about my fears for this film, and that the gross-out and over-sexed jokes are beneath what we expect from the Henson Company, all of which were confirmed.  But like many people guessed (notably in a Muppet Mindset article), the stuff we saw in the trailer was pretty much the worst of it.  It’s almost as if the trailer’s silly string, sugar cocaine, and potty-mouth language prepped us by desensitizing the stigma so we could just sit back and enjoy the film as it is. 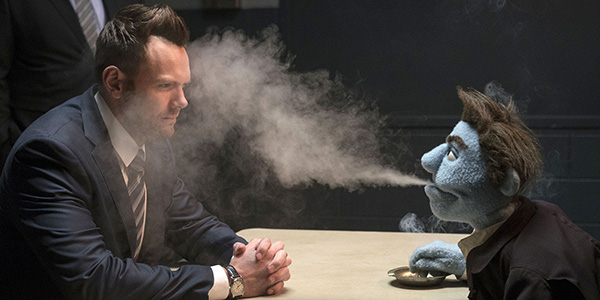 And it’s true, having seen that stuff in the commercials took away a lot of that shock factor.  Which means that the raunch was either completely spoiled or overshadowed by the stuff we already knew about.  Needless to say, none of it worked.

I’m a bit surprised to admit that the biggest sin of the film wasn’t all that blue humor.  It’s what was left over after I got used to hearing puppets swear and screw.  And those remains were one incredibly dull film.

The story is a pretty straightforward one: Ex-cop Phil Phillips gets sucked into a murder case with his former partner.  There’s a whodunit, some more murders, and then they figure out who the bad guy is and take them down.  Replace the puppets with humans, and you’ve got an hour and a half of sheer boredom.

It’s not just the story that’s boring.  There was something off about the pacing of the film, which features long pauses and dialog-heavy moments that made every scene feel endless.  Jokes were spread out too far apart, and the main plot points were far too predictable.  I can overlook a lot of adolescent humor, writing it off as “not my taste”.  But boring?  That’s a sign of a bad film. 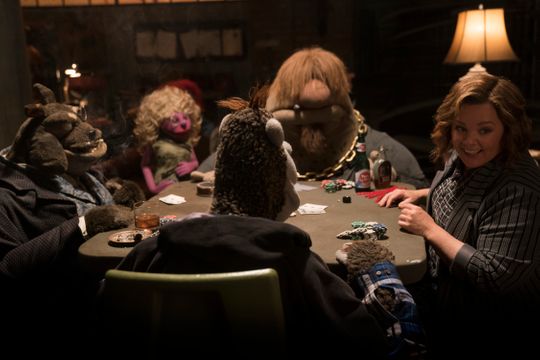 Beyond “boring”, the film is full of missed opportunities.  When I first heard about the movie, I (like many people) hoped it would be more along the lines of Who Framed Roger Rabbit – a crime noir film with the added element of fictional characters.  Since the filmmakers chose to focus more on the shocking content than developing the puppets as a species, a lot of possibilities get left by the wayside.  There are a few solid gags involving the puppets (i.e. a wet puppet getting wrung out like a towel, references to puppets having no bones, etc.), but not a whole lot more.  Remember how well-developed the toons are in Roger Rabbit? They had their own culture, philosophies, and ecosystem.  The puppets in Happytime are just smaller, softer humans.  In fact, I’m wondering why they’re “puppets” at all.  Why not stuffed animals?  It would make absolutely no difference in the film.

Speaking of Roger Rabbit, Happytime Murders does have one clear inspiration from the old franchise, but not from the movie.  Much like the book “Who Censored Roger Rabbit?”, there’s a clear divide between humans and toons/puppets, not just in culture but in how they treat each other. Toons/puppets are treated as second-class citizens, with complete disrespect and as an allegory for how certain people have historically been treated in this country just because of their skin color or background.  While the allegory is a bit more blatant in the Roger Rabbit book, the “puppets are trash” reference is treated as more of a joke, leaving another wasted opportunity for a surprise social commentary on the cutting room floor.

The movie isn’t all bad.  Melissa McCarthy shines as Detective Connie Edwards, who in my opinion gives some of the best line readings in comedy film today.  Even a dull or unfunny situation got a few chuckles out of me thanks to McCarthy’s ad libs and asides.

Likewise, Maya Rudolph was a secret MVP.  Although she didn’t have much to work with in the silly string scene from the trailer, her later appearances are gold.  Why hasn’t she done more with the Muppets??

The cast isn’t all great – Elizabeth Banks and Joel McHale, both of whom I usually enjoy very much, are both wasted.  Neither gets time to shine, and both felt like they shot their scenes in an afternoon.  What a shame.

On the puppet side of things, I have to give credit to Bill Barretta’s performance.  More than most of the other puppeteers in the film, Bill was able to make me forget that Phil Phillips wasn’t actually alive.  His puppetry was remarkably lifelike, and the character very much benefited from it.  The puppet design was a little boxy and inflexible, not leaving much for Barretta to work with, but if he can make a concrete character like Bobo the Bear shine, Phil was probably a cakewalk. 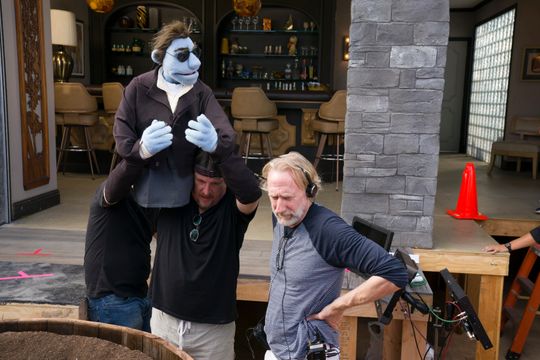 Speaking of the puppets, many of you who see this film will likely be paying close attention to the puppetry and special effects.  And that’s good, because they truly deserve your attention.  I’m beyond impressed with the different techniques used to create puppet legs, puppets smoking, puppets climbing through fences, puppets in hot tubs, and so on.  I only wish that these impressive feats could’ve been used on a better product.

In fact, the pre-credits scene includes lots of visible performers and explanations on how they pulled off a few of those tricky shots.  It was enlightening, and I would’ve loved to have seen something similar from the last few big Muppet projects.

I was also pleased to see that despite the “No Sesame. All Street.” debacle, the film didn’t include any references to Sesame Street or the Muppets (save one, in which Phil says, “This was brought to you by the letter P”).  When I heard about the story element that members of an old TV show were being killed, I was afraid it would be a Sesame Street spoof, further blurring the lines between Henson Alternative and existing Muppet brands.  But no, Brian Henson did the right thing in trying to create his own universe, which was to leave his father’s creations out of it.

In the end, it’s all just disappointing.  I expected better from Brian Henson and The Jim Henson Company.  I wanted more from the premise of a detective story in a puppet/human hybrid world.  I hoped for a better reaction to a new puppet production.  And now I’m wondering how long it will be before the Henson Company manages to make a good film again. 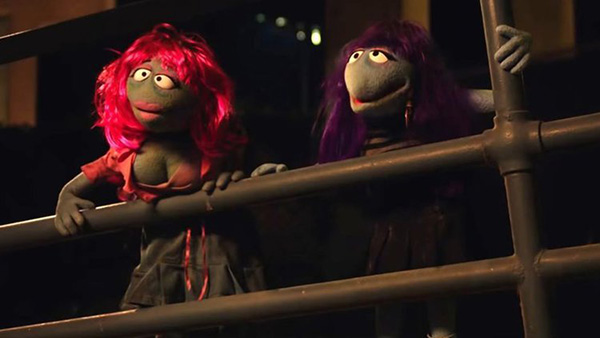 Click here to get “felt” up on the ToughPigs forum!