Those are all the lessons we can learn from Halloween this year, so now it’s time to recognize the Tough Pigs readers who sent me photos of their own incredible costumes. Many of these are photos from last year’s costumes, which they sent me back in November, and they’ve been waiting patiently all year for some recognition. Luckily, all of them are fantastic, so I’m happy to give them the attention they deserve.

First up, Ashley Whitener sent me these great group photos of the Swedish Chef, Beaker, Gonzo and Animal. Now, I don’t know Ashley personally, and honestly I don’t even know if Ashley is a man or a woman, but I think I should probably get to know him or her better, for a couple of reasons.

For one thing, these are awesome costumes, and you have to respect the character choices. Ashley’s crew doesn’t mess around with Kermit or Piggy. That’s for amateurs. They’ve even got the costumes down perfectly. Check out Animal’s shirt, and the chains and studs at his neck and wrists. Gonzo’s wearing a brown suit and a tie, and he’s holding a little Camilla. How hardcore is that? These guys rocked out.

The other reason I like these pictures is cause I think the guy dressed as Animal is really hot.

I don’t know if that’s Ashley or one of Ashley’s friends, but either way, drop me a line, okay? Cause, damn.

So who else have we got? Kevin McCabe sent in this group shot of Beaker, Kermit, Animal, the Swedish Chef and, um, a dog.

Which is also really great, even with the dog. All the heads are terrific, and they must have taken forever to make. A nice job all around. Also, I can’t help but notice the hotness of the guy dressed as Animal. I’m sorry, is it me, or do the hot guys always pick Animal? Is that like a secret that hot guys know? 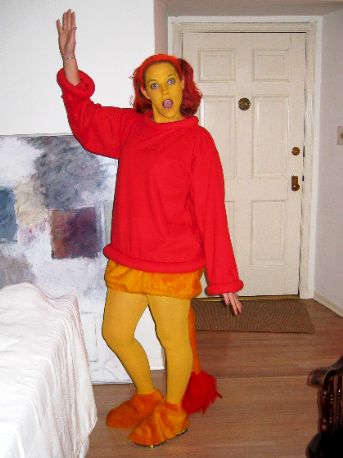 Anyway, speaking of hotness, here’s Amanda Streit in her fabulous Red Fraggle costume. I love absolutely everything about this. Look at the commitment here! The oversized shirt with the puffy, bunched-up collar and wrists… The little bit of orange fur at the waist, the feet, the tail… That’s a lot of attention to detail. Amanda, I hope the people at that party treated you like a queen.

Here’s two costumes from Cathryn Zanoni, earning her Muppet Halloween stripes with two Muppet costumes in what I assume were two consecutive years. What I said on the last page about Piggy costumes revealing your true soul applies here, because what I see in these pictures is that Cathryn is the sweetest person in the whole entire world. And she sent me pictures, so it must be true.

This is a new photo from TP pal Travis Frost, who was crowned the King of Halloween Town back in the first Halloween parade. Travis also made the Pigs in Space pumpkins a few years ago, and this is the latest photo I have from him. You know, even that Animal is a little attractive. Maybe I just have a thing for Animal.

Now, in any other year, any of these photos could have been crowned the winner of this year’s parade. They’re faithful, they’re detailed, they’re obviously the best costumes at their respective parties. Any of them could take home the Tough Pigs prize. But not this year.

This year, we’ve got Jimmy Mastandrea, and this is his costume.

The Swedish Chef, and the Chocolate Moose.

I’m sure that the people at that party were perplexed. They’d see the chocolate, and maybe they’d get it and maybe the wouldn’t. Some people chuckled, and some people thought it was cool. But they didn’t really get it, not the way we do.

Like any genius, Jimmy Mastandrea went unrecognized in his own time. I think we owe it to him to tip our hats, and give the man some respect. This one’s yours, Jimmy. Happy Halloween to you, and to all of us.