For the sake of argument, let’s say it’s the late 70’s, and you’re a kid, and it’s Halloween. You live in the suburbs, and the Halloween tradition at your elementary school is that you wear your costume to school, and in the middle of the day, you have an assembly in the gym so each grade can march in slow circles around the gym floor to show off their costumes.

In fact, we might as well take this to the logical extreme and say that your name is Danny and that you’re me. Okay?

So there are three costume options available to you. One is for your mother to make a costume for you, although in the past that’s involved smearing peanut butter on one side of your face and jelly on the other, handing you a paper plate and having you go to school dressed as a sandwich. (No kidding. It was one of Mom’s bad years.) The second option, which is popular with mothers having even worse years, is to dress up in your dad’s old clothes and go as a hobo. (Again, no kidding. Every year, a good twenty percent of the class goes hobo.)

And then the third option is Ben Cooper. 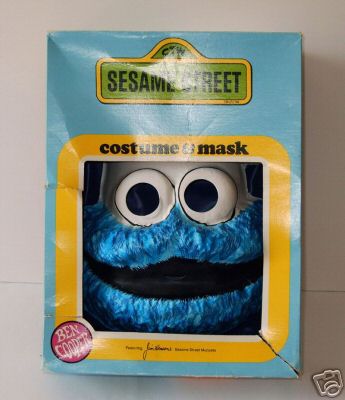 Ben Cooper! Even their name spells Happy Halloween. You go to Woolworth’s — it’s not a legend, there really was a place called Woolworth’s back then — and you dig through huge racks of baby blue boxes, looking through the plastic panels to find the one you wanted. You’d better get there early in the season, when there’s still some Spider Men, C3PO’s and Caspers. You don’t want to show up after the stock’s been picked over for a couple weekends, and the only thing that’s left is two Strawberry Shortcakes and twenty-six Fonzes. Nobody wants to wear a Fonz mask on Halloween. It just looks like a guy.

Anyway, your Ben Cooper box is a two-part affair, mysteriously labeled “costume & mask”. You might think that a mask is a costume, but oh no. A mask is just a mask to Mr Ben Cooper. The costume is the smock.

Now, the trick is that you can see the mask through the box, but you can’t see the smock. You’ve got to be careful at this point, cause a bad smock could ruin the whole illusion. For some reason, the Ben Cooper company often printed a picture of the character right on the smock itself, which created a strange double-vision effect that’s clearly problematic even for elementary school. Why would Snoopy wear a shirt with his own picture on it? The whole costume just falls apart at that point.

Remember, this is the late 70’s. We’re not postmodern yet, so you don’t want a Halloween costume that breaks the fourth wall. If you can, it’s a good idea to peek in the box and check out if the smock is descriptive or representational.

And if what you want is a total immersion experience, then these Sesame Street costumes are a good bet. The blue fur effect on Cookie Monster is a little off-putting, and printing his name in big red letters is entirely unnecessary, but at least it’s on the apron and not just written across his chest. The Big Bird costume is even better; check this out.

It’s awesome, right? Look at those feathers, plus you even get legs. That’s the total package, Halloween-wise. The kid in the Vinnie Barbarino mask is going to wish he never even got up in the morning.

The Ernie strays a little close to the line, with a picture of himself on the shirt, but the shirt is cute, so it’s forgiveable.

And then Super Grover is just straight up naked. It looks like it’s a Bring Your Own Cape kind of deal, so you probably end up with a red towel tied around your neck, but still, this is a prime costume. You wear this to school, and everyone forgets all about the peanut butter and jelly sandwich. This costume wipes the slate clean.

So obviously Ben Cooper is the only way to go. You can only see out of one eyehole at a time, and after ten minutes the inside of the mask smells like the outside of your face, but what the hell. Halloween only comes around once. Make it count.

PS: Thanks to TP pal Tony Whitaker for pictures!