Meanwhile, back in the more or less present, people who are dressed up like Sesame Street characters are still the coolest people at the party.

Take this party, for example. I found a bunch of photos from what looks like an off-campus beer bash on Google Images, and now I’m posting them on my website, which is what happens to people when they post party photos on the internet for just anybody to find.

There’s five guys at this party dressed in Sesame costumes, including Ernie over here, who I personally think is kind of hot, in an off-campus beer bash kind of way. The guy dressed as Big Bird is clearly the wing man.

The other three are dressed as Bert, Oscar the Grouch, and some kind of vague representation of Cookie Monster, and really Ernie is the only completely successful costume, as seen below.

You got that? Big Bird: Not successful.

But the thing that’s really interesting about this set of pictures is that it seems like these are the only guys in costume at the whole party.

Now, unless the baseball cap boys are supposed to be dressed like Fred Durst from Limp Bizkit, then the Sesame Street guys are the only ones wearing costumes, and therefore they win. Right?

Exactly. Nobody wants to talk to the “are you supposed to be Fred Durst” guy, but everybody wants to hug Oscar. Now, the one thing I’m wondering is: did these guys plan their Sesame costumes together, or was it just a big coincidence? Cause I can imagine being the first one there, just Big Bird standing around awkwardly by the chips, and then Cookie Monster shows up, and you think, oh, thank God. There’s another Muppet here, now I have somebody to talk to. 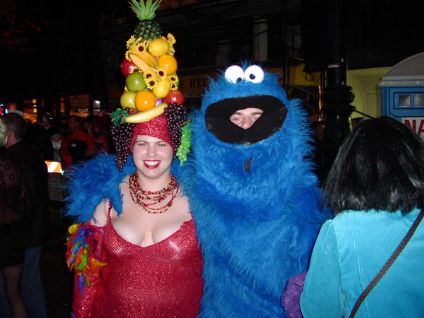 Like, take this guy above. That’s a pretty raw Cookie Monster head, with the mouth all the way down there at neck level and two spooky eye gouges right in the middle of the face. But look at him, gesturing at the other people as if to say, hey, eye gouges aside, I still look better than these dorks, right? I mean, what are those two supposed to even be? Cult members? A biohazard team?

This guy above has the advantage too, even though that’s clearly the worst of all possible Cookie Monster costumes, because he’s strategically positioned himself between two people who are even more off-putting than he is. (Note to self: Do not serve alcohol to the pubic hair bird lady.)

So if you’re going to a party this Halloween, why fight it? Sesame characters have all the laughs. It’s a no-brainer.