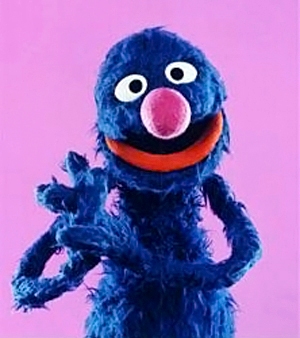 Can you believe that our old pal Grover is already 50 years old???  (He doesn’t look a day over 6.)  Debuting in December 1967, he’s having a big milestone birthday.  We sat down to write about the fuzzy and blue monster, but with hundreds of songs and sketches under his belt (if he wore a belt, I mean), we hardly knew where to start.  Grover has been a superhero, a waiter, a salesman, a nuisance, a teacher, a fool, a celebrity, and just about anything else you can imagine. How do you even narrow it down??

We reached out to our fellow ToughPigs writers and friends to find out what their favorite Grover moments were.  Obviously, there’s a LOT missing, but it wouldn’t be a proper tribute to Grover if it was perfect.

It’s not my favorite Grover moment (it’s probably not anyone‘s favorite moment), but it might be the most important.  Almost exactly 50 years ago, the Muppets appeared on The Ed Sullivan Show, starring in a Christmas sketch with Arthur Godfrey in which a bunch of monsters try to sneak into Santa’s workshop to steal his toys.  One of those monsters is “Gleep”, better known to hardcore fans as “Fuzzyface”, and instantly recognizable to Sesame Street viewers as an early version of Grover.

He doesn’t get a ton to do, but you can hear that he’s being performed by Frank Oz, starting off a great relationship between performer and puppet that would last decades.  What a great Christmas present that turned out to be!

Grover has been many things to many people over the course of his fifty-year history. After all, Grover is pretty flexible as a character. He can be manic. He can be a klutz. He can be a little mischievous as well.

But, I’m a sucker for the softer-side of the little blue monster, and he’s never been more Downey-fresh than in this 1973 Sesame Street clip. “How Do You Do” is a Joe Raposo written undercover-classic tune with a seventies, lackadaisical feel not unlike one of my favorite Raposo songs “Somebody Come And Play.”

“How Do You Do” is delivered by the legend Lena Horne, shimmering with warmth. In the lead-up to the song, Grover expresses his shyness and social anxiety that we all indeed felt as kids, and many of us still deal with as adults. What follows is a marvelously sweet number where Horne and Frank Oz show a fantastic ease working together. This allows the character of Grover to just exist and react with a stellar co-star.

It really brings out the softer, fuzzier side of the lovable, old monster, especially during the improvised end. After a warm hug, Lena Horne kisses Grover on the nose. The ad-libbed joke that follows is both a little sassy and very funny: Grover in a nutshell.

Grover doesn’t have a single signature song like Cookie Monster’s “C Is for Cookie” or Ernie’s “Rubber Duckie.”  But he doesn’t need one, because he has a signature sketch: “Near and Far.”  Anyone who grew up watching Sesame Street during its golden age will know what you’re talking about if you reference it, and it’s been spoofed many times.  It’s a pretty simple concept… Grover runs really close to the camera to show us “near.”  Then he runs really far away to show us “far.”  (I think maybe this was done with a special camera lens, because he looks really far away.)  Then he does it again, and again.  It’s hard to imagine most Sesame Muppets having the patience to keep this up as long as Grover does, but educating the youth of America is more important to him than his own wellness, so he does it to the point of exhaustion.  And sure enough, I’ve never forgotten the difference between near and far.

I have dozens of favorite Frank Oz Grover moments, but I want to highlight an Eric Jacobson moment instead, because I think Grover is his strongest character by far. In 2004, Grover went on Jimmy Kimmel and completely owned the stage. He talked about how disgusting it is when Kermit eats with his tongue. He got a little creeped out by Jimmy’s over-enthusiasm for how Super Grover’s legs look in his costume. He threatened to fight fellow guest Tim Daly for insulting Sesame Street. It’s a genuine tour de force performance, it was the moment when I knew Grover was in good hands and still had a bright future ahead of him.

Madeline Kahn was one of the most versatile actors of her generation – she was hilarious, she could do accents, and she had a gorgeous singing voice. But not even the radiant Madeline Kahn could outshine the power of Grover. She’s terrific in “Sing After Me,” of course, but the real highlight is Grover. He stretches his echoes out beyond any reasonable length, becoming a distorted echo of her original singing. It’s remarkable to watch.

For most of my childhood Sesame Street phase, Grover was my favorite Muppet, so I was thrilled when I received the album Grover Sings the Blues for my birthday one year.  It’s a “best-of” Grover album, so every track on it is great, but the one that made me laugh the most is “The Question Song.”  Taken from The Muppet Alphabet Album and later adapted for the TV show, “Question” finds a Fran Brill character (who is not Prairie Dawn, but sounds like her) valiantly attempting to teach the listener about words that start with Q, despite a distinct lack of help from Grover.  “What sound does a duck make?” she asks.  Grover says “Moo.”  What do we call the containers that milk come in? Cows. What do you call the wife of a king?  A farmer.  Grover is generally at his funniest when his enthusiasm overcomes his common sense. What do I call “The Question Song?” Classic Grover.

“What Do I Do When I’m Alone?” might be the most poignant Sesame Street song of all-time, because it captures both the good and bad parts of being by yourself. Like all of us, Grover enjoys his alone time, playing catch with himself and dreaming about flying. But eventually he realizes that it’s fun to be with other people too. It’s a lovely song and Frank Oz sings the heck out of it, but it’s also an important message for kids about finding the balance between socialization and being comfortable on your own.

There are so many great Grover clips out there, but I have to go with a somewhat obscure favorite. Prairie Dawn might be better known for her teamups with a certain other fuzzy and blue monster, but the sketch where she directs Grover in a remake of “Singin’ in the Rain” is phenomenal. I mean, first of all, Grover sings that song better than anyone else, including Gene Kelly, of course. But also Grover’s penchant for oblivious failure is perfectly on display here, which contrasts so well with Prairie’s high-strung perfectionism. Lastly, it’s got Grover in adorable rain gear, and that’s probably what matters most. 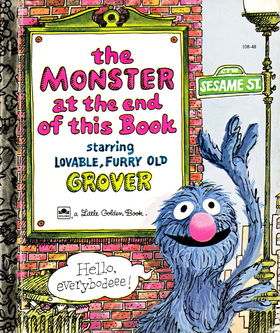 In addition to all these great sketches and songs we’re talking about, Grover appeared in several other forms of media, including video games and albums and lots and lots of books.  The best Sesame book, of course, being “The Monster at the End of This Book”, which perfectly encapsulates the anxiety, foolishness, and ultimate embarrassment of Grover while also capturing his gritty nature and Frank Oz’s oh-so-specific voice.  And aren’t we all the monsters at the end of our own books?  Think on that one, folks.

Man, I love love love Super Grover.  How do you choose just one Super Grover sketch to represent the rest?  I guess we’ll talk about the first one, in which Supes flies overhead two boys fighting over an apple.  It’s got everything you could want: A crash landing, content that would never be approved for Sesame Street today, and a crisis that gets resolved without the help of Super Grover in the slightest.  It was truly the Secret Origin we deserved for everyone’s favorite superhero.

Maybe I’m just a sucker for any Jim Henson/Frank Oz combination, but I think my favorite Grover moments are when he’s up against Froggy Baby himself, Kermit.  From the early lectures (when Grover would slap Kermit on the back) to Grover’s salesman sketches when he’d basically ruin Kermit’s apartment, they’re all gold.  I chose one at random and found Grover the Sunglasses Salesman, which features some brilliant Frank Oz ad-libs (he says Kermit’s eyes are like “two ping pong balls floating in a sea of mildew”), and a culmination of Grover’s many failed attempts at adding body parts to Kermit just to make a sale.  Due to his versatility, Grover often gets to say and do things that might not work for Bert or Fozzie or Cookie Monster, and this is a great example of Frank Oz really cutting loose and having fun with the furry blue guy.

Some of my favorite Grover sketches are the ones where he’s a waiter.  My favorite waiter Grover sketch is probably the one in which he’s working at “Casa de Comidas,” where all the menu items are in Spanish and every time he hears a Spanish guitar play, he has to stop what he’s doing and do a little song and dance. But the guitar plays a lot, and this results in Grover repeatedly dropping poor Mr. Johnson’s food and dancing all over it.  After the first time, we know it’s going to happen every other time, but it’s still always funny.  And the best part is when Mr. Johnson asks Grover if just ONCE he could get his order without Grover dropping it on the floor.  Grover’s response: “Where there is life, there is hope.”  It kind of sums up the Grover and Mr. Johnson relationship.  Mr. Johnson never has a good experience with Grover as his waiter, but he keeps going to the same restaurants, hoping this time will be different. 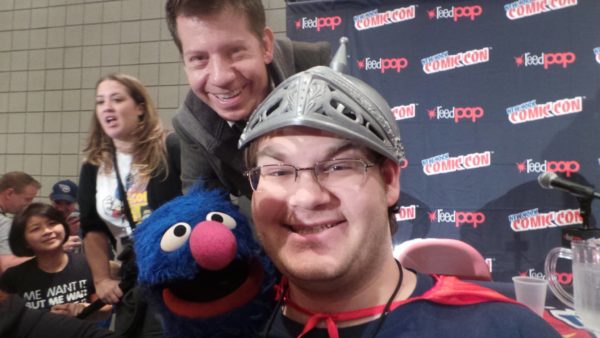 I could talk about the comic genius of “Around, Over, Under, and Through,” or my childhood love for “Monster in the Mirror,” or the fact that I would kill to have Grover’s resume, but my favorite Grover moment is far more personal. It was 2014 at New York Comic Con, and for a few years, I had done a low-key cosplay of Super Grover. It was always a hit with fellow Muppet fans, and garnered me a lot of compliments. But as luck would have it, that year, Sesame Workshop hosted a panel celebrating the show’s 45th anniversary as well as the recent release of the “Numeric Con” episode.

With Grover (and Eric Jacobson) on the panel, I deeply wished I could get a picture of me in my costume with the monster that inspired it. As the panel ended, Grover and Jacobson were mobbed by dozens of fans hoping for a photo. He did his best to accommodate as many fans as possible, but with the tight turnaround between panels, there just wasn’t much time. As I finally made my way to the front of the line, the staff informed us that we had to clear out. Saddened, I was ready to turn around and leave, understanding the limitations, when I heard a familiar voice, one I had heard thousands of times in my life in countless episodes of Sesame Street, say, “Okay, one more, but only because you are dressed as me.” And I got one of my all-time favorite photos. Happy Anniversary, Grover, and thank you (and your friend, Mr. Jacobson, too). 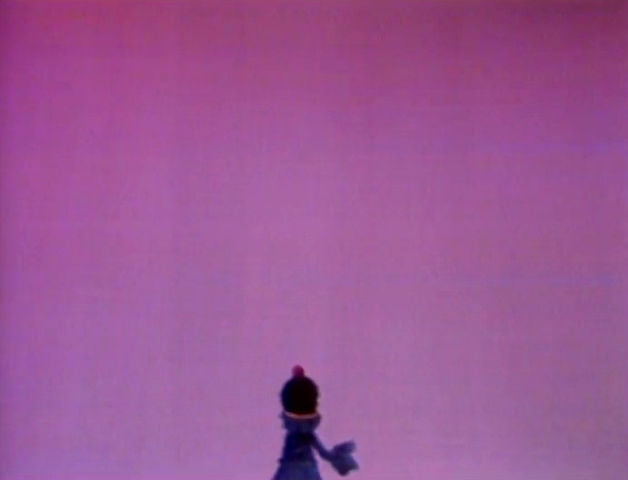 Many thanks to all of our contributors who shared their favorite Grover moments with us!  Be sure to let us know what your favorites are too!

Click here to help us celebrate one old monster on the ToughPigs forum! 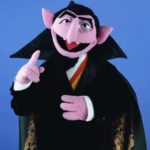