We all know that Gonzo’s nose is iconic. It’s what makes him stand out, what classifies his appearance more than anything else (and we’re talking about a guy who regularly wears a chili pepper shirt here, folks).

Maybe you’ve wondered what kind of a creature or being Gonzo is to have a nose like that. Maybe you’ve wondered how he smells. (Awful, by the way; trust me, I know his roommate). But the real question that you probably haven’t asked yourself is this: what the heck is in his nose?

Now before you start wondering about whether Gonzo could use a tissue, let me explain. You may have seen the exclusive merch for Muppets Haunted Mansion for D23 Gold members. There’s a lot of swell looking stuff in there, but one thing really stood out to me, and I couldn’t stop thinking about it. It’s this coin that features Gonzo’s skull.

Look at that. That’s clearly him. That’s his iconic nose. But did you notice that it’s made up of bones? Disney, are you telling me there’s bones in there?? That set me off onto a nightmarish thought train that haunted me until I begged Joe Hennes to let me write this article for some alleviation. And now I’m taking you all along for the ride. All aboard!

Obviously Gonzo being the famous daredevil that he is, he’s had his fair share of injuries, or at least stunts and situations that risk life and limb. But there’s been so many times that Gonzo’s nose specifically has been twisted and mangled, and all of them are made much more unsettling if you re-watch them with the idea that that nose is composed of multiple bones rather than, say, cartilage. Let’s explore them, shall we?

In The Great Muppet Caper, Gonzo’s nose gets crushed after getting stuck in the closing elevator doors. He seems less than fazed by it though, noting the fun he had. Later we see the doorman outside having just helped him fix his nose, and I kind of love the idea of a doorman casually setting some completely out of whack bones on the sidewalk. Hey, healthcare’s not cheap for us Americans, so sometimes you gotta take what you can get.

A couple of Muppets appeared in Disneyland’s 35th anniversary special (which I highly recommend, by the way. Where else are you going to see Tony Danza get nearly suffocated by a boa constrictor AND a Supercalifragilisticexpialidocious rap from the Fresh Prince of Bel-Air?). Miss Piggy and Gonzo do a Cinderella parody, where Gonzo plays Piggy’s Fairy Godmother. Piggy accidentally wishes for Gonzo’s nose to blow up, and so it does! Half of it just blows right off!

Boy, does that look painful. And yet, it doesn’t, as in this instance we do get a glimpse inside his nose, and there’s not a bone in sight! When Piggy wishes for his nose back, Gonzo does lament it a bit. I’m starting to wonder if Gonzo secretly wants his nose to be horribly disfigured.

In Muppets From Space, Gonzo is struck by lightning and after meeting the cosmic knowledge fish, returns to earth with a nose that’s all twisted in the wrong direction. The movie doesn’t show it returning to normal, but it does eventually. I guess he found another doorman to help.

And all of these examples don’t showcase the many other less dangerous but still perilous situations Gonzo’s nose has been put through, that could seriously hurt anyone else’s nose. He’s hung his body weight from his nose in the Teresa Brewer episode of The Muppet Show, been pulled by his nose by Billy Bones in Muppet Treasure Island, had it twisted nearly all the way around by Ed in Muppets From Space, and a duck bites it during the opening credits of a couple episodes of The Muppet Show.

So I threw around theory after theory in my head as I was writing this article. Is it really cartilage? Nothing at all? Is Gonzo’s nose actually a beak? Is it full of feathers, given to him as tokens from his past chicken lovers? And then, during all this pondering, I watched Muppets Haunted Mansion, and my nightmare thought train went full steam ahead.

The coins that are being sold as merchandise do show up very briefly in the special, but it’s a much more poignant yet terrifying scene that holds a place in this article. During Gonzo’s climactic scene where he is forced to face his fears, he ages, and in a delightfully disturbing way. One notable change is the way his nose shrivels and shrinks the older he gets. According to Kirk Thatcher, if they’d gone any further, they’d have had his nose completely fall off!

So let’s add all this up. Gonzo’s nose is strong enough to support his body weight, pliable enough to twist in all directions, resilient enough to survive being repeatedly mangled, and still looking great, if not better, after all that. I may not have an answer to the material that makes up his nose, but whatever it is, it sounds like something we should be investing in, as it’s resilient as all heck.

Now if you’re like me (and you’re obviously at least somewhat like me; you’ve gotten this far into an article about Gonzo’s nose), you might be wondering to yourself “how does Gonzo’s nose stay the shape that it is after all of those injuries?” Someone who has broken their nose may have a bump or slightly crooked nose as a result, but Gonzo’s has not only stayed about the same shape, but actually gotten smoother over the decades. Check out his first appearance (as Snarl, the Cigar Box Frackle) in The Great Santa Claus Switch compared to a still from Muppets Haunted Mansion. They’re clearly not the same nose. So here’s my theory: unlike most noses that turn more crooked after each injury, Gonzo’s nose is so special and crooked already that it does the opposite.

But as we all know, speculating on Muppet canon is cyclical at best, and when it comes to Gonzo and his origins, quickly becomes unnecessarily existential or just plain weird (see: the entire plot of Muppets From Space). But while all that may be confusing, especially for those of you who prefer a set chronology of your favorite characters, I think… it kinda works for Gonzo? It makes sense that he’s “kinda like a turkey, but not much”. That he’s an alien from space, but also not really. That his nose is easily crumpled and scrunched and evolving and changing color… but also not really. Because although it’s gone through many things, it’s still part of Gonzo, and he’s still the same character at heart. So it also makes sense that that nose is so iconic and unlike any other character and eye-catching. Because those are things that are essentially Gonzo.

Click here to smell terrible on the ToughPigs forum!

What Muppet Fans Do 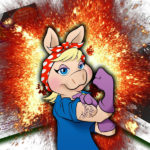