Every so often, running a Muppet fan site really pays off.  We were already honored and excited when we recently got the opportunity to interview Kathy Mullen, and what was easiest for her was to meet at the unofficial headquarters of No Strings USA, which happens to double as her home.  Naturally, since Kathy’s husband is the incredibly talented Michael Frith, who served as the Creative Director for the Muppets (and designer for many, many of the Muppet characters), their walls are covered in original Michael Frith artwork and sketches.

In the midst of our shock at the priceless artwork everywhere we looked (in the immortal words of Indiana Jones, “It belongs in a museum!”), we had a brief moment of clarity when we asked for permission to take photos of the framed art.  Lucky for us (and you!), Frith and Mullen gave us the go-ahead to post the photos online, because work of this caliber is just screaming to be shared with those Muppet fans who would appreciate it the most.  We’ve seen a bunch of his work before, but most of the pieces were brand new to us.

Unfortunately, since it would’ve been too presumptuous to ask to remove the pictures from their frames and take them home to run through a scanner, we had to make the best of a point-and-shoot camera.  That means we  were left with a few reflections, glares, blurs, and odd angles.  We tried to fix them as best we could via Photoshop (while keeping the integrity of the original artwork), but a few of the flaws will still show through.  All of those faults are on our end, and most certainly not Michael Frith’s.

Before we get started, we’d like to ask you one more time to consider donating to Michael Frith and Kathy Mullen’s Indiegogo campaign, raising funds to complete their life-saving puppet films for children in Syrian refugee camps.  It’s a wonderful and important project, and they would be extremely grateful for any and all help from the puppetry community.  Click here to read more about the campaign and to learn how you can help!

This first image was Michael Frith’s first work for Sesame Street.  Do you know what it is?  If you guessed “bed sheets”, you’re right!  Give yourself a cookie.  I don’t know about you, but I can definitely see myself dozing off on these every night. 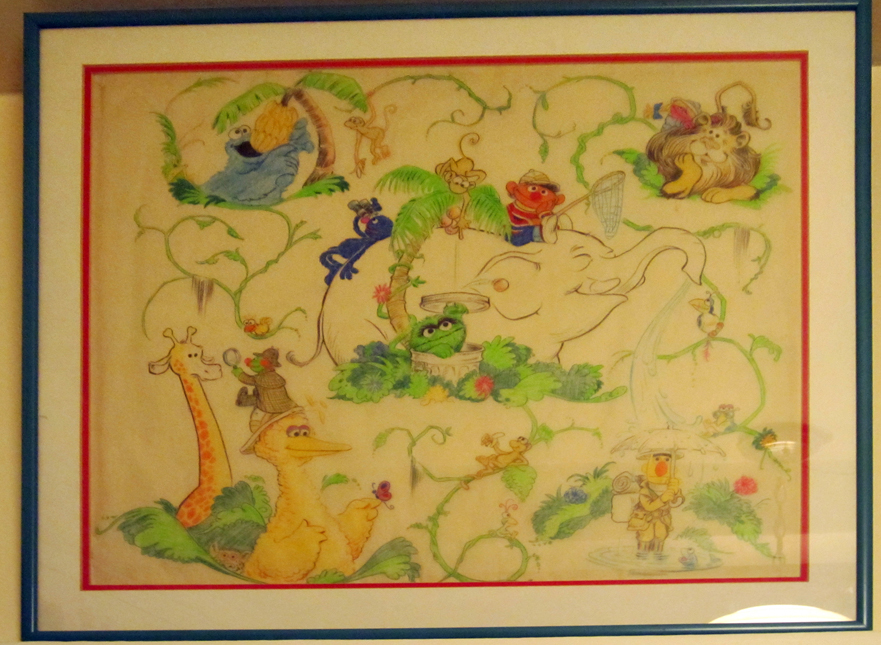 It seems that Michael Frith’s most requested character was Miss Piggy, as evidenced by the sheer amount of sketches lining his walls.  In this batch, you’ll see a design for a Piggy phone (called “The Spirit of the Telephone“) that never made it past the prototype phase, as well as various cheesecake and calendar sketches. 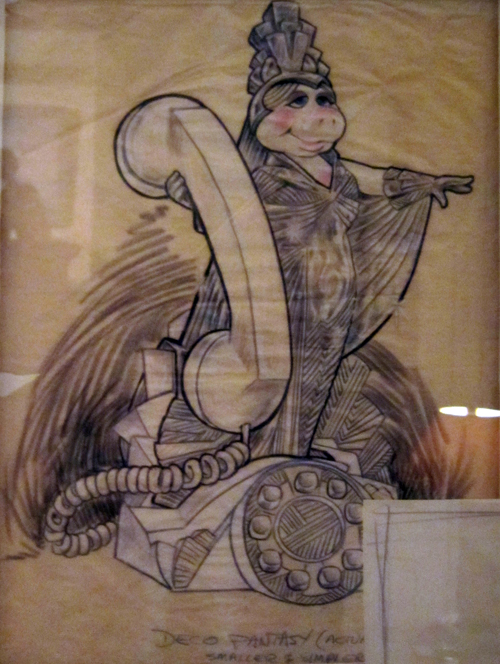 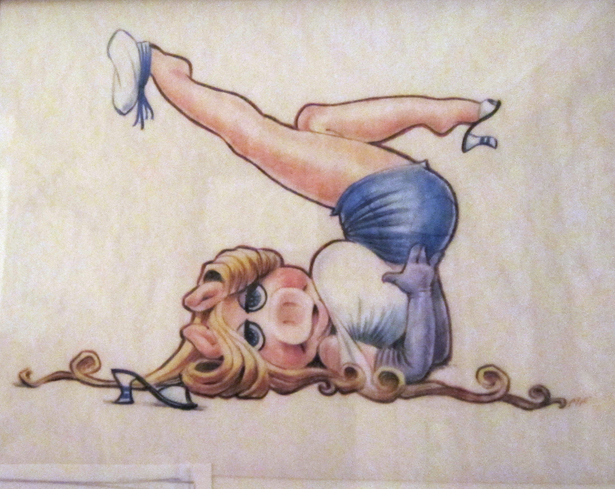 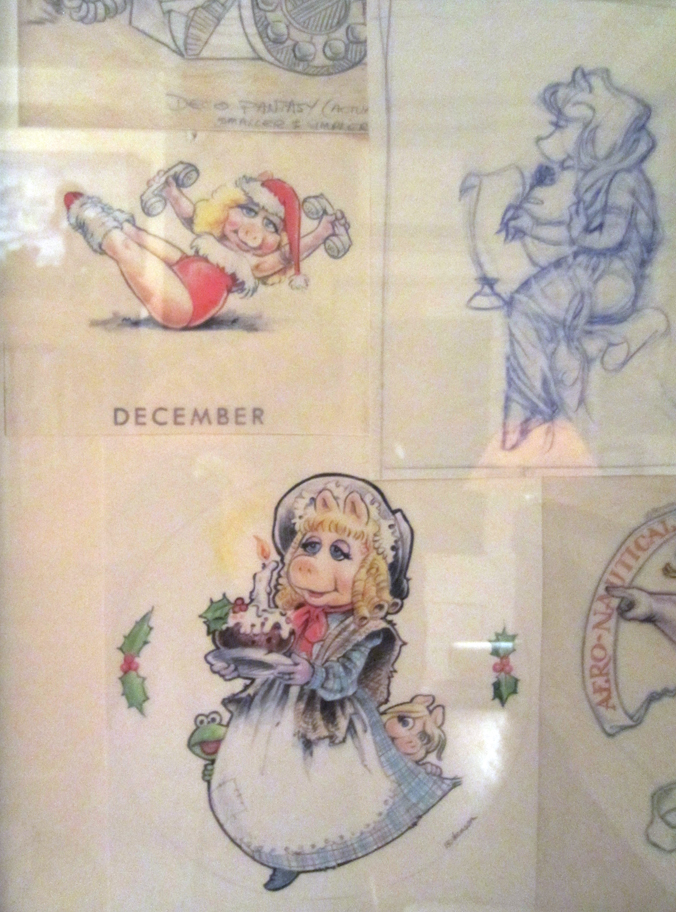 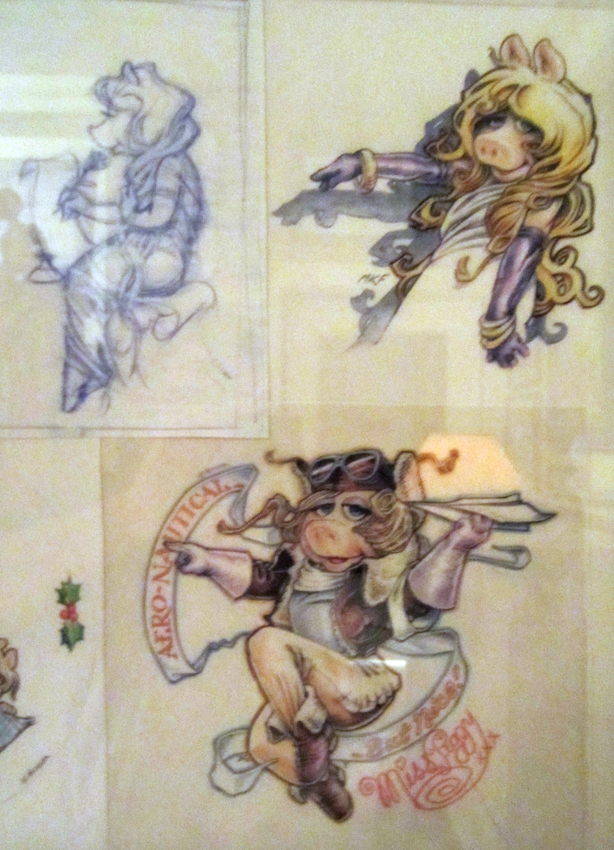 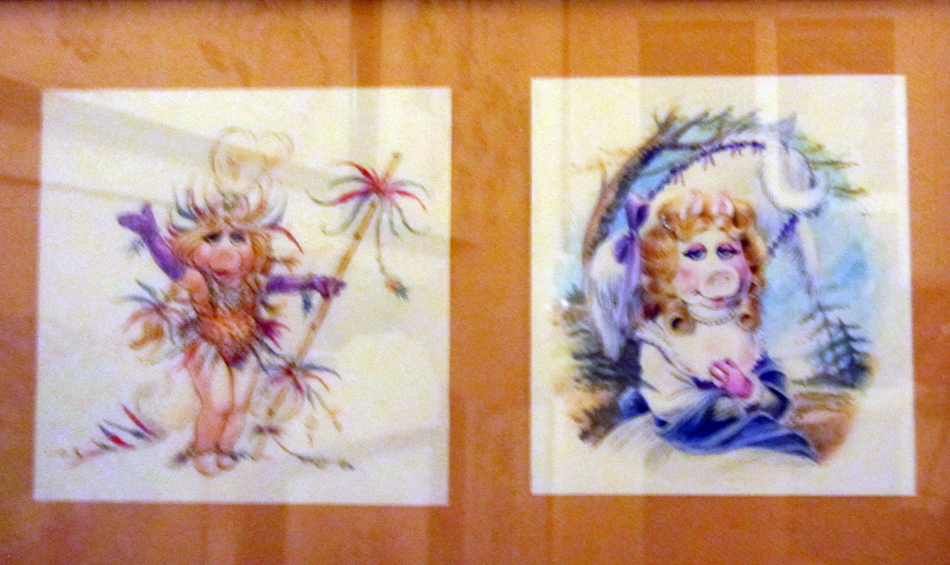 When Muppet Vision 3-D was in development, Jim Henson wanted a three-dimensional logo to sit above the entrance.  Frith designed the statue but didn’t sculpt the miniature model seen below.  But he did get to keep it! 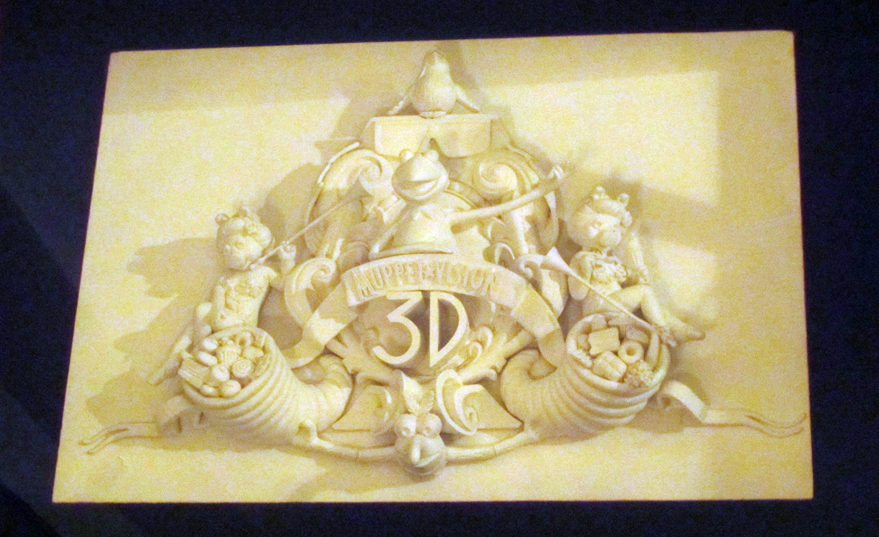 Michael Frith is also famously known for his design work on Fraggle Rock, for which he designed, well, pretty much everyone.  Below you’ll see the very first Junior Gorg sketch (with a note pointing out that he’s kinda wearing a diaper), Convincing John, Pa Gorg, the Doozer Dome, and Marjorie the Trash Heap (who, it seems, almost had legs). 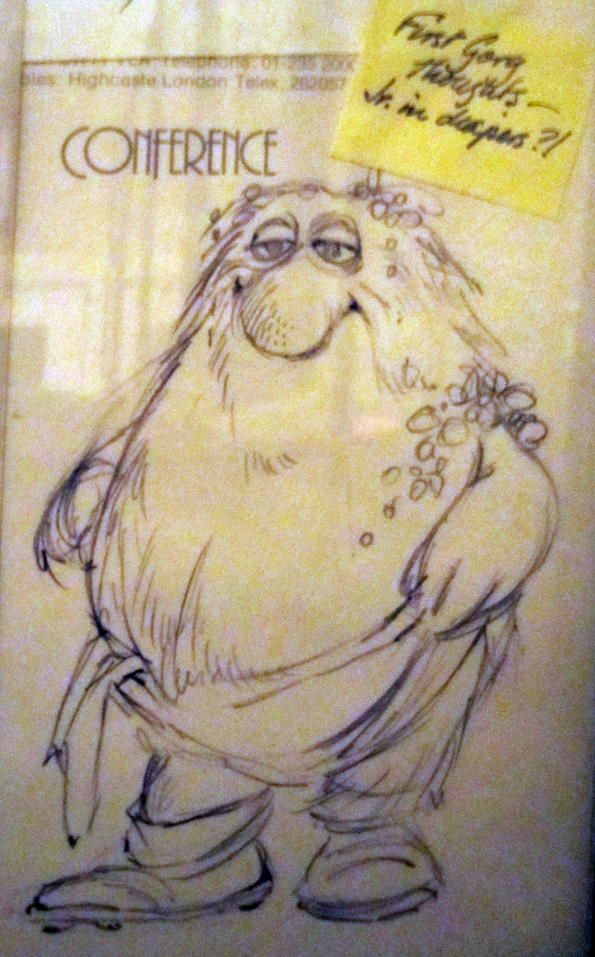 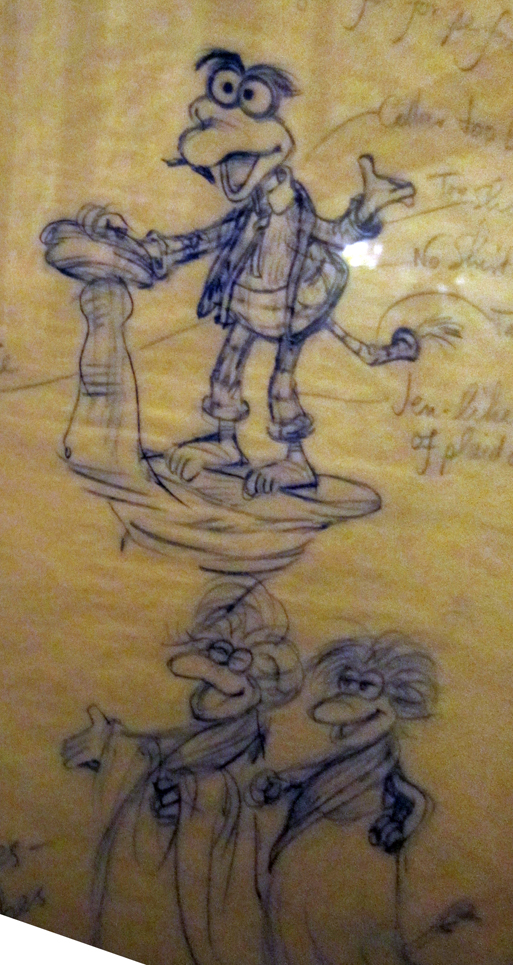 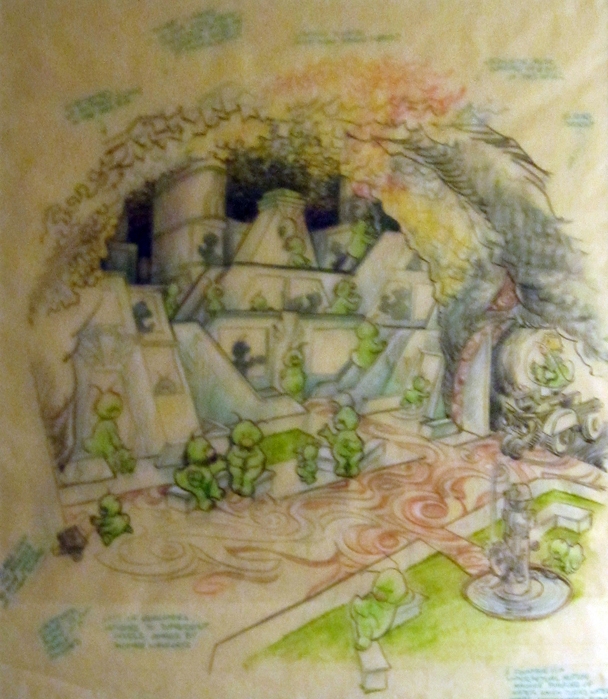 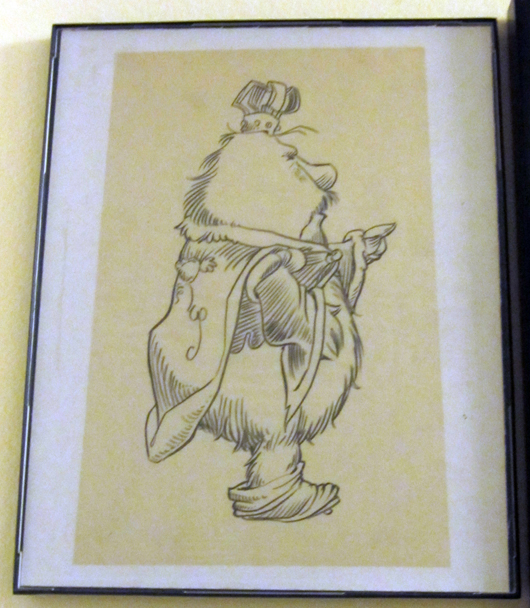 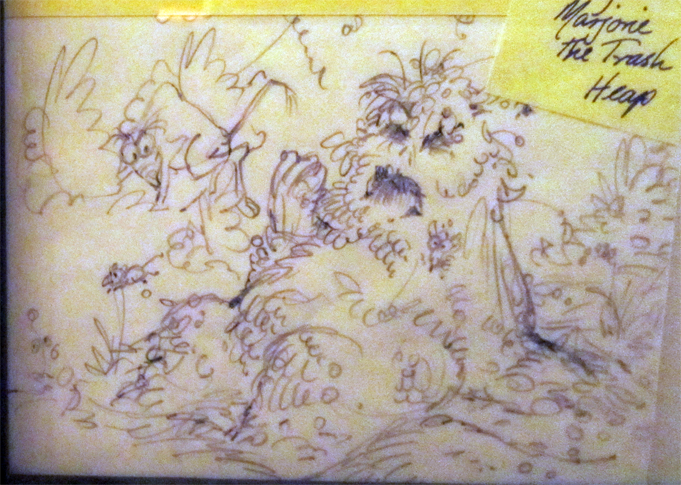 But that’s not all his Fraggle work!  Here we have an animation cel from the animated Fraggle Rock series, along with various sketches of Fraggles, Fraggle culture, and background creatures. 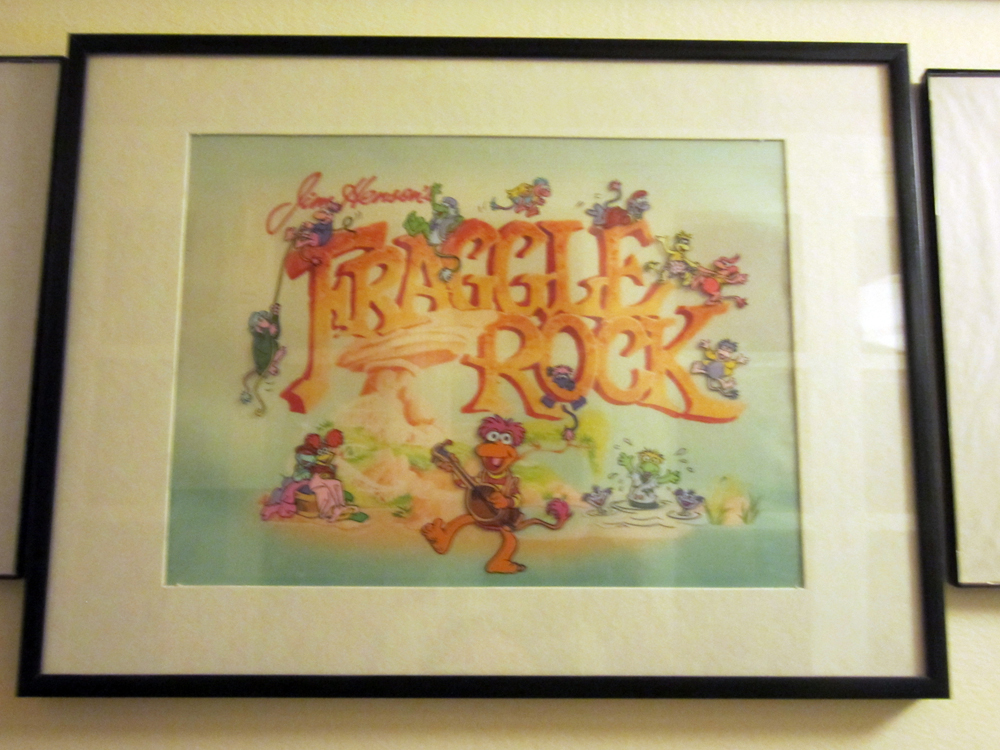 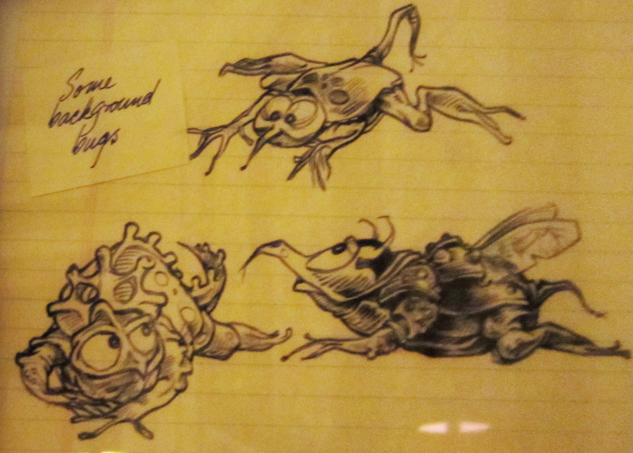 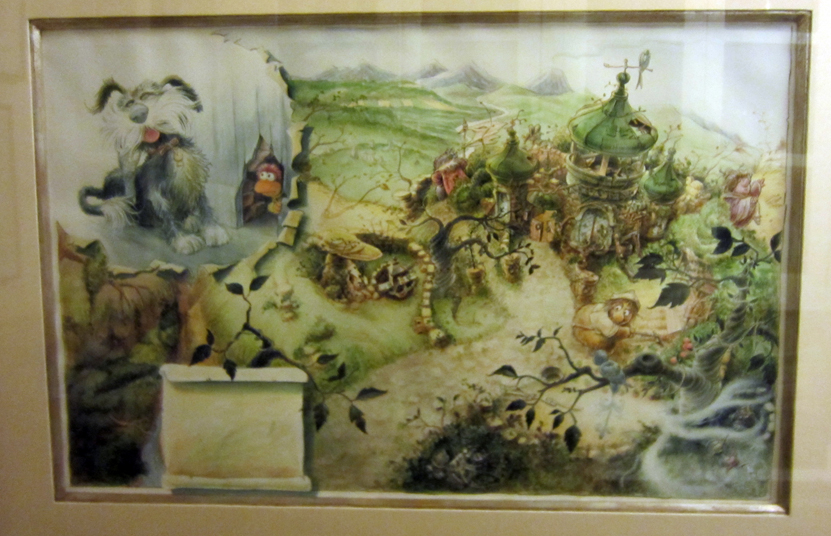 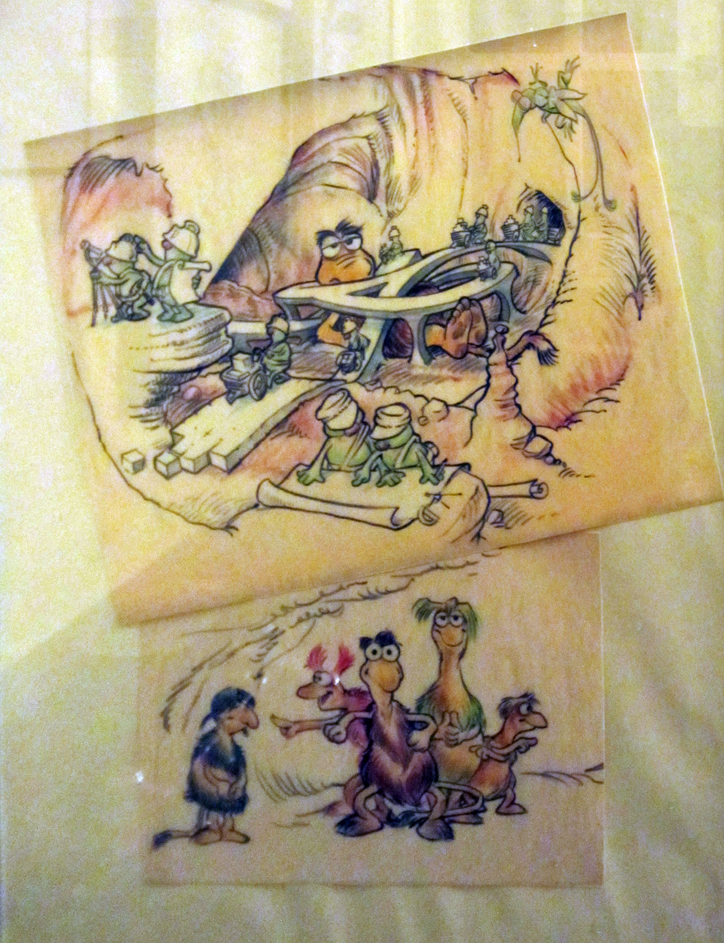 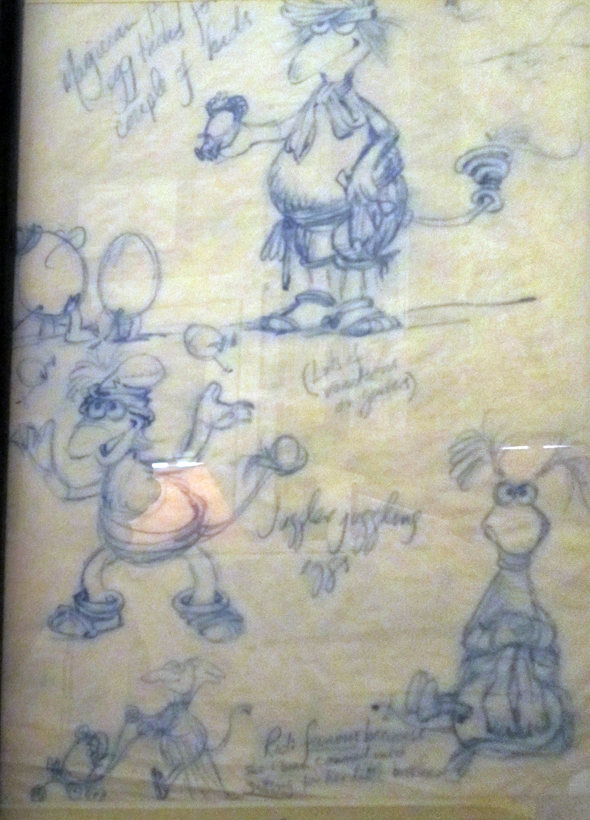 Frith also handled the design work for The Christmas Toy, the main cast seen below.  Balthazar the teddy bear ended up almost exactly as Frith envisioned, but Mew looked a little more mouse-like, Rugby was much thinner (and almost a little too “Hobbes”), and Apple was much more of a cutesie fashion doll. 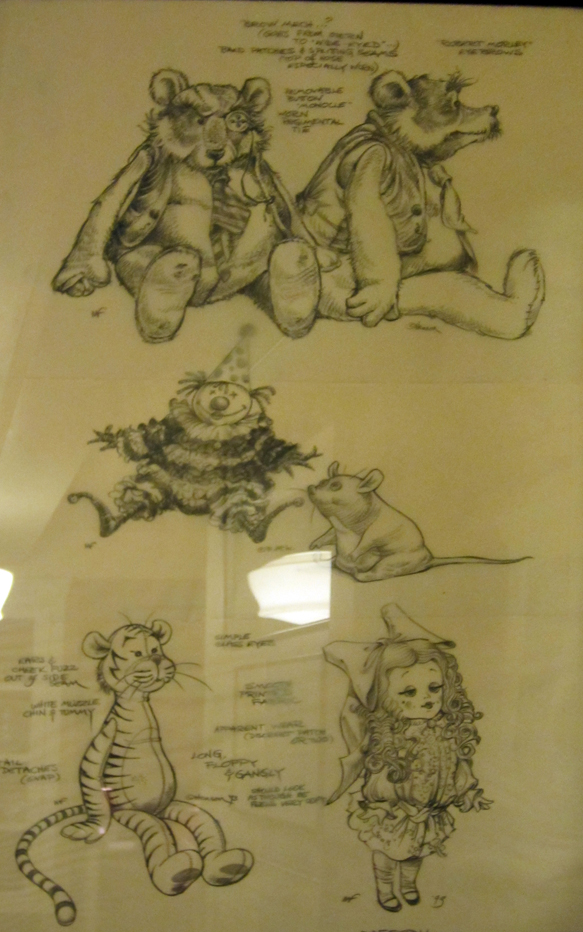 Michael Frith really rose to fame as one of the main designers for The Muppet Show, and here we see the treasure trove of the classic characters he helped develop.  The first is the most impressive: Fozzie Bear.  Frith told us that he presented this sketch to Don Sahlin, who then gave him his first lesson in puppet building: Never design a character that can’t move his lower jaw.  Frith understood immediately and redesigned Fozzie to look more like the bear we know and love today.  Below Fozzie, you’ll see early sketches for Beauregard, Lips, Quongo, Camilla, and more.  Also included is a sketch of Kermit the Frog that ended up being printed on the side of an NOAA aircraft. 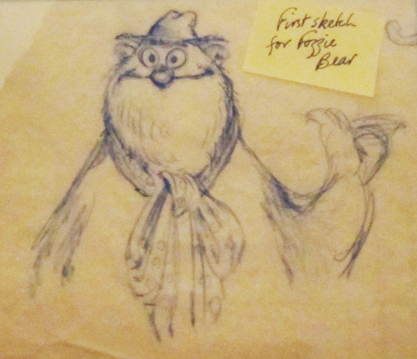 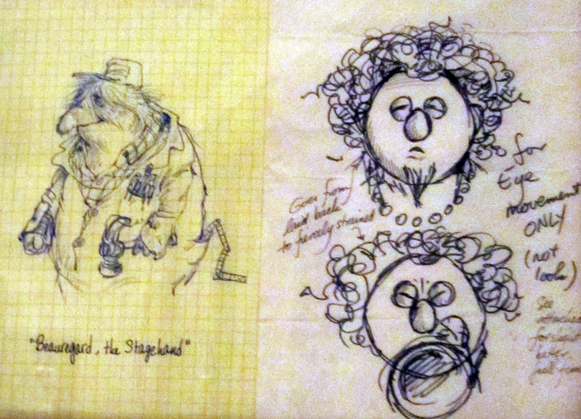 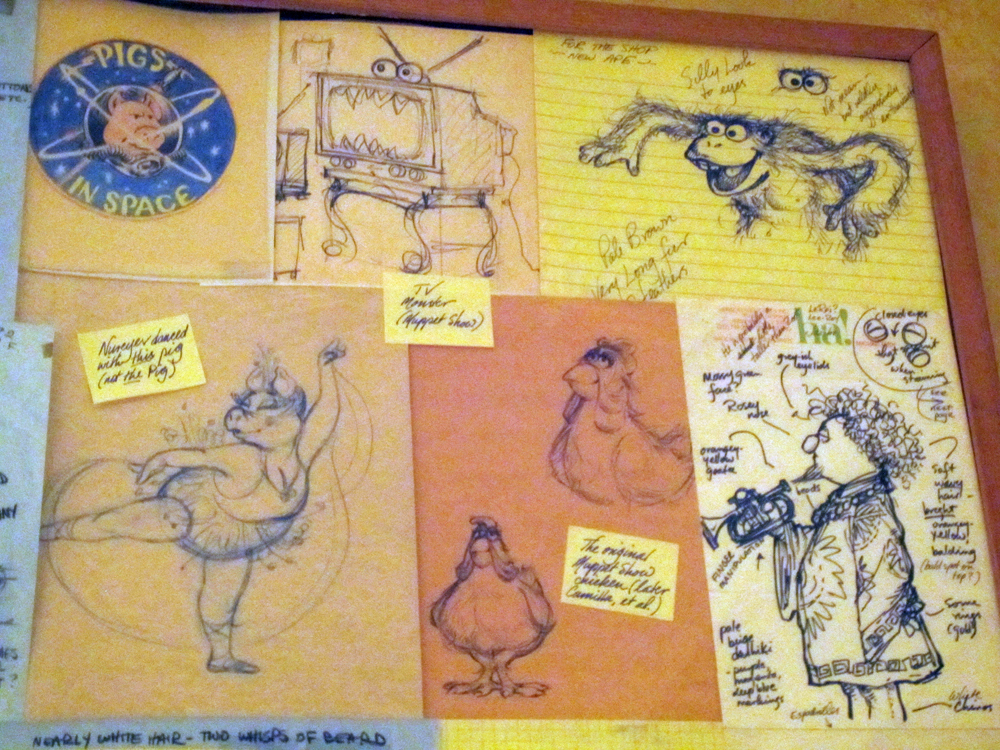 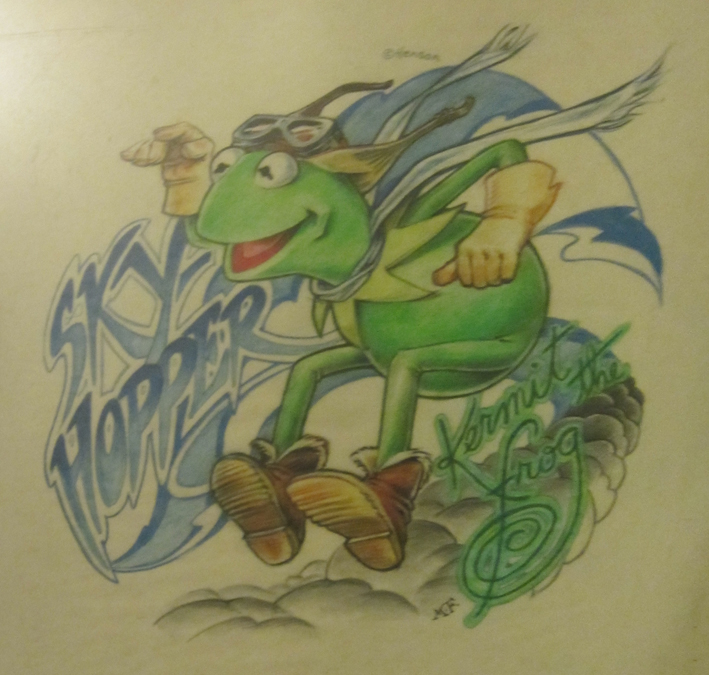 We learned a lot about Little Muppet Monsters in our interview with Kathy Mullen, so it was a treat to see Michael Frith’s original sketch of The Muppet Show basement, where the show took place.  You really get a sense of the show’s potential from this sketch, and it’s a shame we never got to see more of it. 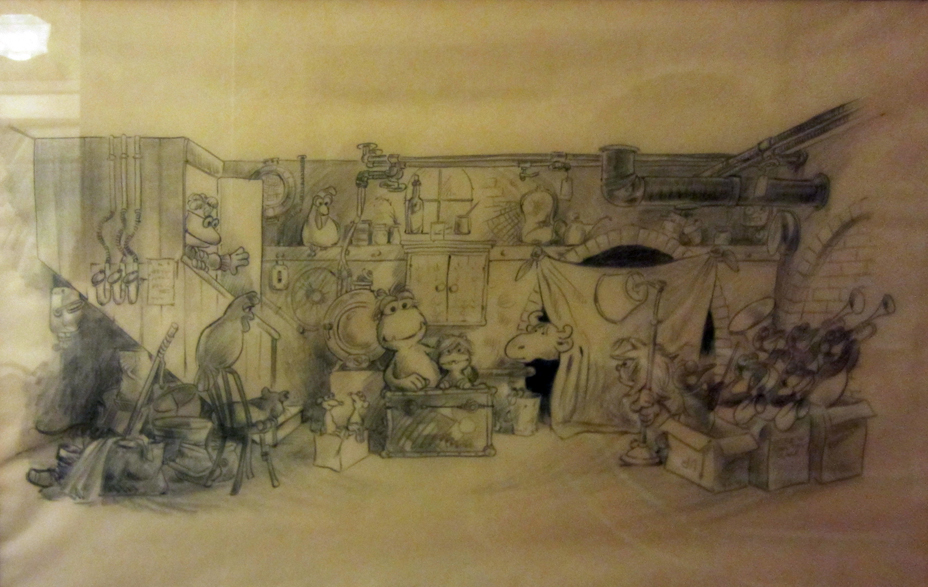 Here’s a batch of sketches from some other Muppet TV shows and films, including Muppets Tonight’s Jowls, some ideas for the thieves in Muppet Christmas Carol, Miss Piggy as Muppet Treasure Island’s Benjamina Gunn (Frith told us that he put the anteater in as a joke, and was surprised to see that Flaubert actually made it into the film), a Muppet Babies poster, and the Gone With the Wind homage that made it into the background of The Muppet Movie poster. 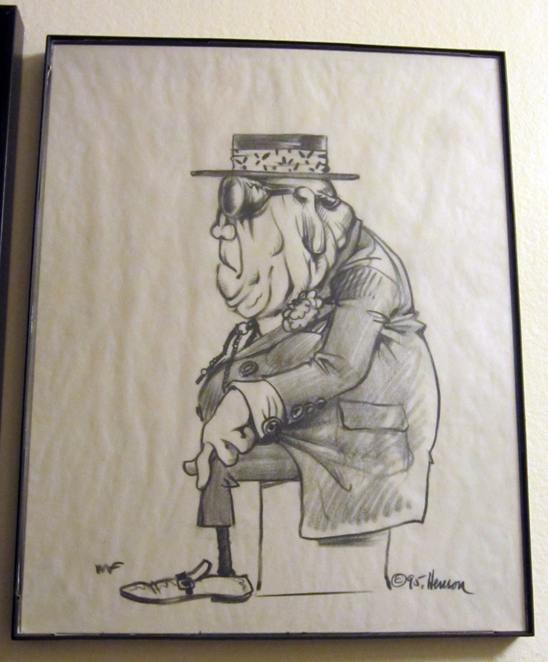 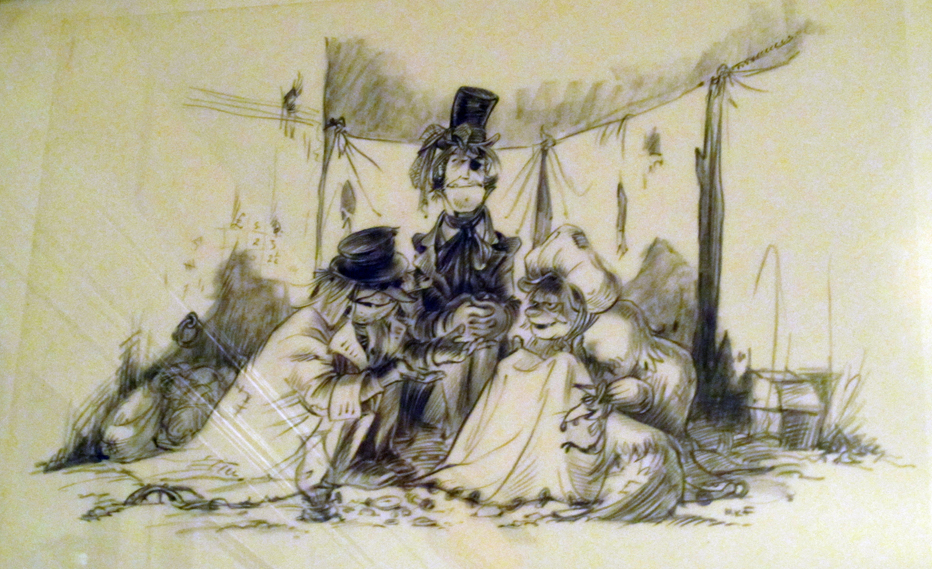 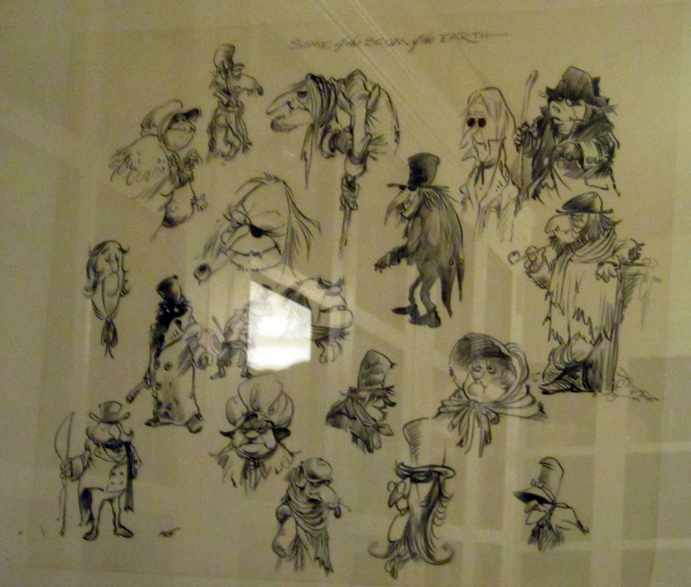 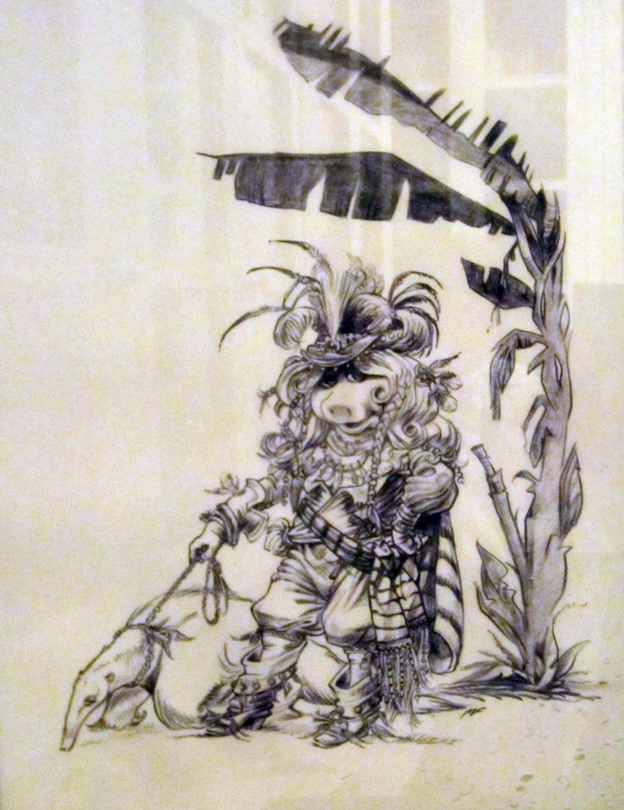 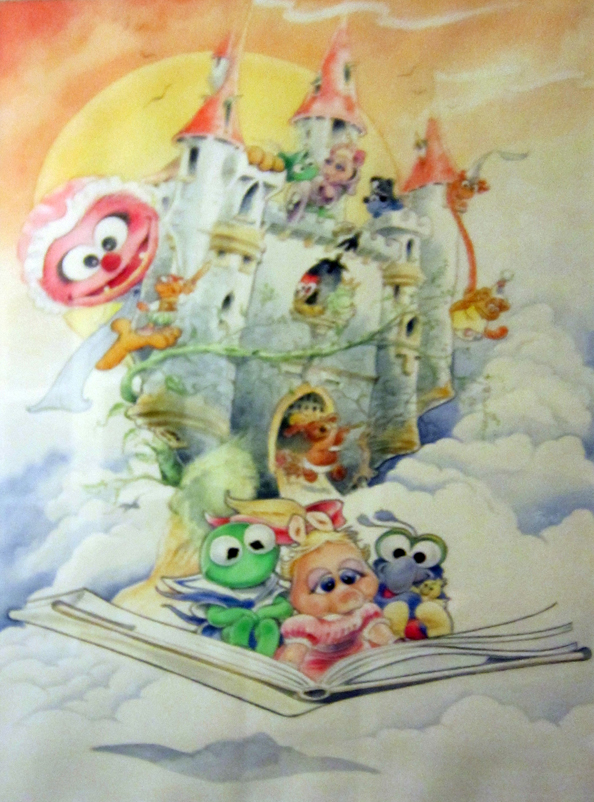 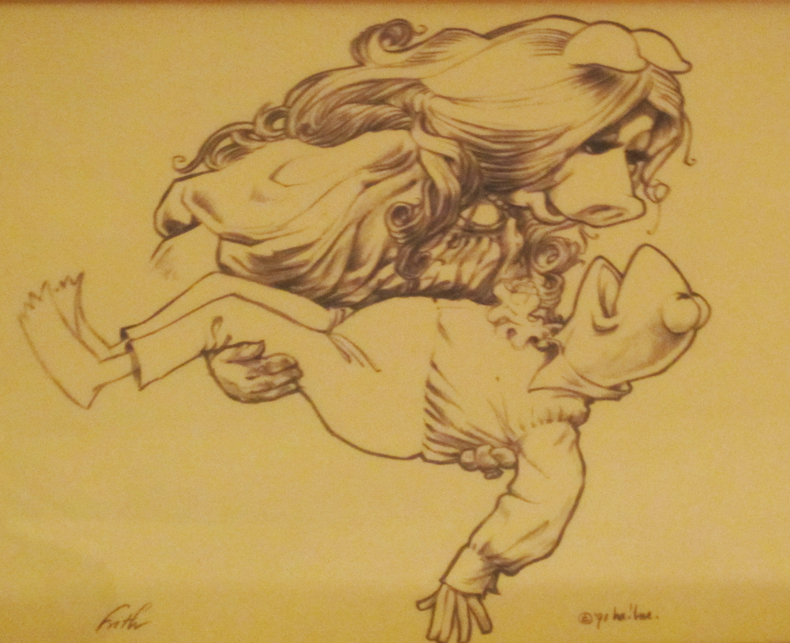 When Jim Henson developed Inner Tube, the show that would evolve into The Jim Henson Hour, he originally envisioned the main set to mimic the Muppet Workshop.  So Michael Frith designed just that, which you can see below as well as in the Inner Tube pilot.

Lastly, my favorite piece from the Michael Frith collection.  It’s a gorgeous illustration from the mid-90s featuring characters from The Muppets, Fraggle Rock, Muppet Babies, The Dark Crystal, Labyrinth, The Land of Gorch, Mother Goose Stories, The Jim Henson Hour, Dog City, and The Christmas Toy.  It’s basically a love letter to all the Muppet projects Frith worked on, and it’s all kinds of epic. 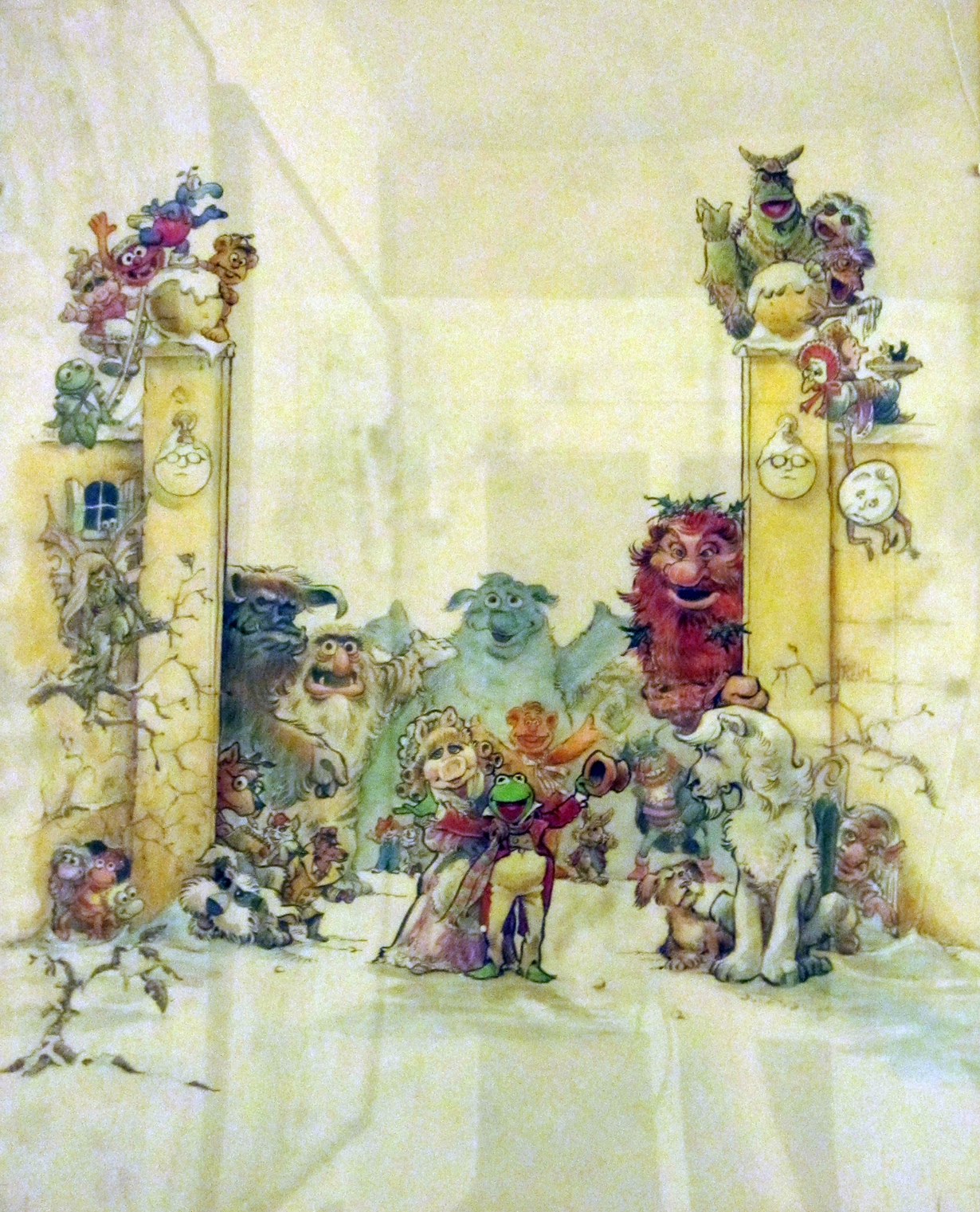 Click here to add an anteater to the ToughPigs forum!