Join us for a week-long celebration of Muppet performer Fran Brill!  Fran recently announced her retirement from performing, so we’re dedicating a week’s worth of articles to her colorful career with Sesame Street and the Muppets.

Quick, name a Fran Brill character from Sesame Street!  Now name another one!

Unless you were making an active, wise-guy attempt to be unpredictable, you almost certainly said Prairie Dawn and Zoe.  Those Sesame Street Muppets were Fran’s most significant roles on the show, and both have been around for decades.  But Fran played a bunch of other characters on the show that are also worth mentioning.  In addition to dozens of animals, Anythings, monsters, foods, and inanimate objects, she also had several regular or recurring characters who might not be as well known to your average fan.  And hey, this is Fran Brill Week on Tough Pigs, so it’s the perfect time to talk about some of them! 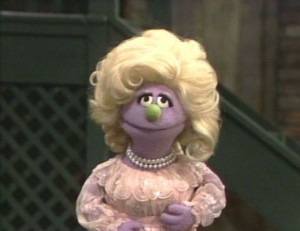 The songs on Sesame Street have covered every conceivable genre, and country is no exception.  Fran Brill doesn’t get singled out often enough for her singing ability, but when she performed Polly Darton, she sounded just as good as that other, non-Muppet country singer whose name just happens to rhyme with Polly Darton. Fran Brill wasn’t the only performer to play Polly, but she gave her an authentic country twang in various songs throughout the 1980s.  Sadly, as good as her performance was, Children’s Television Workshop never announced plans to build a Pollywood theme park.

Here’s a delightful Fran-as-Polly moment, in which she annoys Oscar:

[Tangentially related anecdote: Several years ago, I had a temp job in an office filled with cubicles, and one day I overheard an employee trying to tell her neighbor about a Sesame Street character she remembered from her childhood: “I think her name was Polly Darton, and she would play the piano and say, ‘Welcome, oh, welcome, to our little play…'”  I tried finding the source of the voice so I could correct her (“Actually, you’re thinking of Prairie Dawn, but there was a Polly Darton, and she was often played by the same puppeteer.  You’re welcome!”), but I never could figure out which of the many office denizens it was.  But if you’re that woman and you’re reading this right now: You were thinking of Prairie Dawn!] 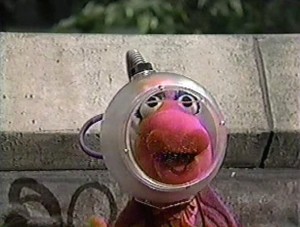 By the time the 25th season of Sesame Street aired, I was most assuredly outside the show’s target age range.  But that didn’t stop me from watching it whenever I could, and one thing I remember about that time was that Wanda Cousteau seemed to be all over the street scenes.

This Fran Brill character, a fish explorer whose name is two jokes, found her way to Sesame Street while on an expedition to check out dry land.  Her regular schtick was to talk about everything she did as “boldly [doing the thing] like no fish has ever [done the thing] before.”  I guess the writers were pretty much finished with her after a season or two, but while she was around, Fran gave her just the right combination of boldness and goofiness.

I can’t find any of Wanda’s street scenes on YouTube, but here’s what I assume is her introduction, in which she announces to her fellow fish that she’s leaving the ocean behind: 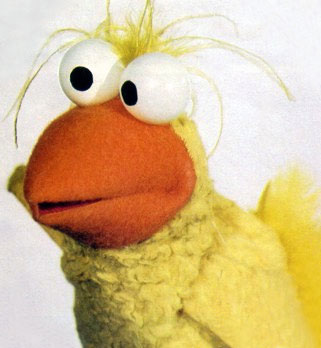 Little Bird is an odd duck. (Heh.)  His regular performer was a woman (Fran Brill, in case you haven’t been paying attention), using a voice not far removed from her normal speaking voice, but he was always referred to as male.  And while he was featured prominently in storybooks and other merchandise for years, as far as I know, he was never used all that much on the show.  Fortunately, his legacy is assured thanks to the classic track “Mr. Big Bird, Mr. Little Bird” from the legendary (and legendarily weird) Grin and Giggle with Big Bird album, which proved Fran Brill’s commitment to making material work even if it’s not all that funny and doesn’t really make much sense.

In this nifty clip from the show, Little Bird demonstrates how imagination works, with a little help from the magic of television. 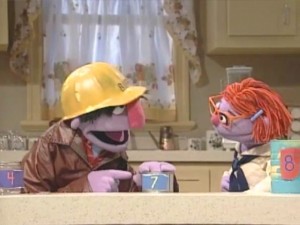 At some point, Fran Brill said in an interview that when Roxie Marie disappeared from Sesame Street, her personality was partially absorbed into the then-new Zoe.  But they’re two completely distinct characters, demonstrating Fran’s skill at playing all kinds of little girls.  (And in all her Sesame seasons, she’s played a lot of little girls.)  While Roxie Marie and Zoe both have a certain spunkiness, I can’t imagine Roxie Marie wearing a tutu or playing with a pet rock.  She was often seen with her uncle Biff, and Fran Brill has cited those performances between her and Jerry Nelson as being among her favorite Sesame experiences.

Roxie Marie stuck around on the show for a while, lasting long enough for there to be some merchandise of her, and even a giganto-Roxie Marie for a Sesame Street Live show. 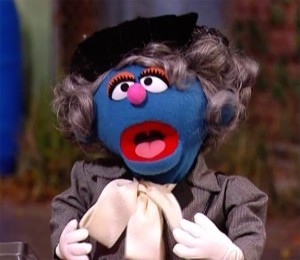 You may not recognize this lady, but I love Mrs. Crustworthy.  Not only is she an essential member of the Toast-Lovers Society, she sums up Fran Brill’s talent in a neat little blue package.

Mrs. Crustworthy only made a few street scene appearances on Sesame Street in the 2000s, but as much as any other character, she’s proof of what a great comedy person Fran Brill is.  Her mannerisms are funny, her timing is funny, her voice is funny.  Speaking of which, Mrs. Crustworthy doesn’t really sound like any other Fran Brill character I can think of, so she’s also a fine example of Fran’s voice-acting skill.  And she sings!  When I watch the clip below, I marvel at how much Fran is able to do with such brief on-screen time.  She makes every toast joke count, and creates a lovably daffy character.

And now, I hope you’ll all join me in a toast to Fran Brill: A great Muppet performer, and one Sesame Street has been lucky to have.  Cheers!