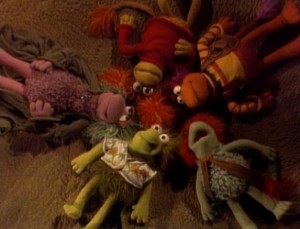 The world of Fraggle Rock is a beautiful one.  Between the glistening stone walls and the plant life in the corner of every twisting tunnel, along with the brightly-colored Fraggles and shimmering Doozer constructions, every set, puppet, and prop on the show is worth poring over.  So it seems like an obvious concept to make a large hardcover book covering the look and history of the show.  Thankfully, someone at Henson thought the same thing.

“Down at Fraggle Rock: Treasures from the Jim Henson Archives” is an upcoming 160-page coffee table book, due in stores on September 10, 2013, and retailing for $40 (although it’s available for pre-order on Amazon.com for $27.08).  Here’s the book’s description, courtesy of Amazon:

Delving into the benevolent philosophy that lays at the heart of the show, Down at Fraggle Rock will follow every stage of its creation, from early concepts to the incredible puppetry that brought the unforgettable characters such as Gobo, Red, and Mokey to life. With contributions from Frith, Stevenson, Kenworthy, and other key members of the creative team, the book will take readers inside the intriguing process that produced this landmark series.

Now if that doesn’t get you excited, you might as well give up yourFraggle Rock Fan Club membership card now.

We’ll be sure to bring you more details as they arise, but for the moment, let’s all touch our heads together and share a dream about a world where books like this exist.  Oh hey, our dream came true!

Click here to peruse the Encyclopaedia Fragglia on the ToughPigs forum!