As most of us Henson fans know, Fraggle Rock has found somewhat of a home over at the Archaia Studio Press for a while now. Since 2010, Archaia has released a handful of one-off issues about our five favorite Fraggles and what adventures they’ve been getting themselves into since Fraggle Rock ended its run in 1987.

Up till now, Archaia’s issues have been pretty stand alone, often being released on Free Comic Book day even. However, at the end of last year, Archaia began releasing a four-part series of Fraggle comics for all our enjoyment. Fraggle Rock: Journey to the Everspring was released through October 2014 to January 2015 (It’s now available for pre-order in a hardcover collection), and was written by Kate Leth and illusrated by Jake Myler. Fans of the classic Henson show were able to revisit these beloved characters yet again on a whole new journey. 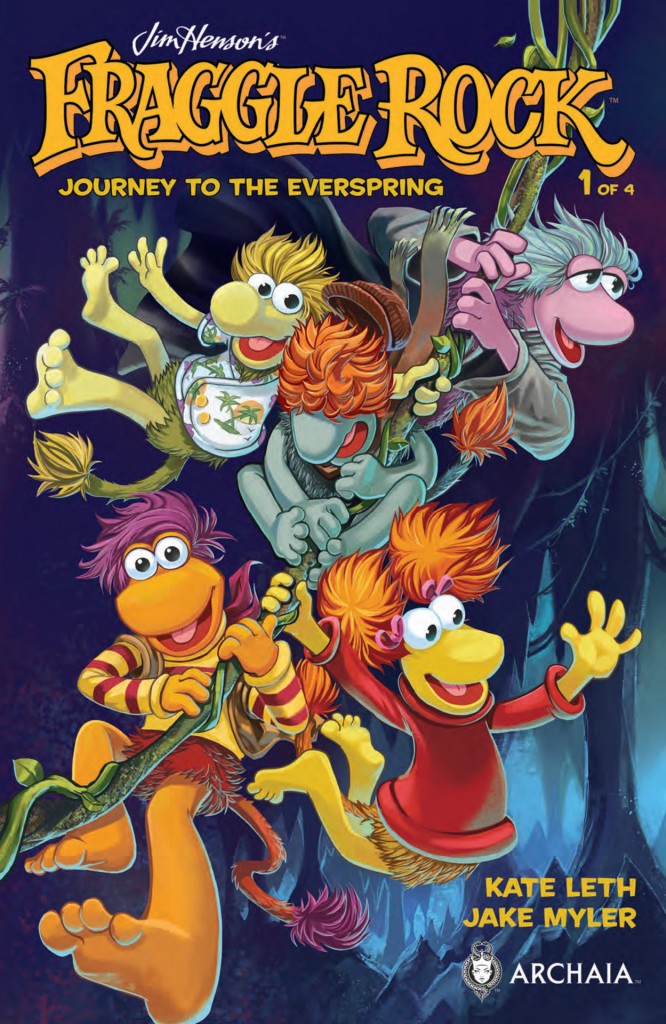 The story starts off with Gobo Fraggle telling Cotterpin of his need to invent a solar-powered, steam-driven, fully-mobile shoe-polisher. Cotterpin praises his want to create, but points out that building a shoe-polisher when Fraggles don’t even wear shoes is a little ridiculous (plus the solar power part might be a problem cause, y’know, the whole living underground thing). She convinces him to, perhaps, create something a bit more useful for everyone. After visiting with Wembley, Mokey, Boober, and Red to see if he can invent something to help any of them out, Gobo discovers a horrifying problem – all of the water has vanished! 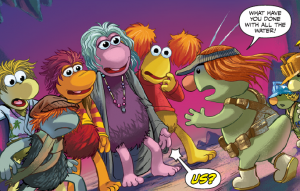 Cotterpin explains to the Fraggles that the source of all water in Fraggle Rock comes from the Everspring, which is a great distance away from the Rock. Without even batting an eye, the five Fraggles head off towards the Everspring to solve the problem. The Fraggle squad must work together to restore the water to not just Fraggle Rock, but all other water sources the Everspring flows towards. Along the way, the gang faces their fears, helps one another, and even makes a few new friends. In the end, the Fraggles learn about taking care of the earth, not judging others based off word-of-mouth, working together, and what it takes to be a leader.

The first thing readers will notice is how absolutely gorgeous Myler’s artwork is, especially the settings and his attention to detail. Not long after noticing the marvelous illustration, you’ll certainly notice the writing. Leth manages to capture all the characters we’ve come to know and love, as well as creating a handful of new, exciting faces. In the first issue, the Fraggle squad is spread out throughout the Rock, 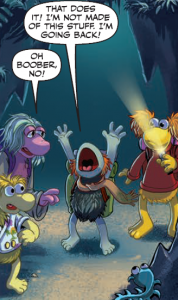 which works well enough, but once they group up to start their journey the story really comes together. Best of all, each one of the characters is, well, in character. We see Gobo inventing and leading the charge, Mokey being the calm, wise one, Red over zealousing as usual, Wembley wembling, and Boober melodramatically freaking out on almost every page – all so perfect! Some of my favorite Boober quotes from this comic’s run include: “I should have stayed in bed!” and “They’d use our ears for saucers!”

We also get some nice highlights of other characters from the show. As mentioned, Cotterpin is present and actually plays a pretty large role as the story goes on. Uncle Traveling Matt doesn’t make a physical appearance, but one of his postcards certainly does. Even Marjory, Junior, and Philo & Gunge make brief cameos, which is truly delightful.

One of my favorite parts of this comic is that the Fraggle squad meets a whole other group of Doozers. Without spoiling too much of the where and why, the reason I love these new Doozers so much is because they’re so… so… awesome. In appearance, that is. Unlike the classic Doozers, their looks vary extremely from one another. One sports an afro, another a pink mohawk, one has goggles, some have flashy vests and gloves, and so on and so forth. They look like they either came from the future or are massive fans of the late 70’s retro aesthetic. 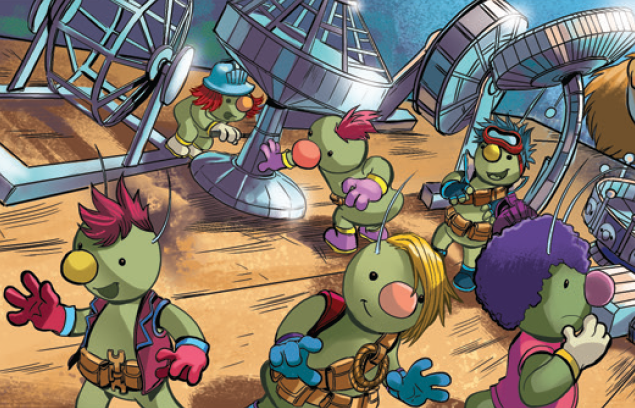 A charming element of this series is the incorporation of music. Despite being created in a medium wherein music cannot really take part, Leth and Myler have the Fraggles bursting into song several times in the series. These are songs created just for the comics, and despite there being no melody or music to accompany the words, the lyrics have such a catchy rhythm and rhyme that you can pretty much create the music in your head. Not to mention the songs are all so well written. I had to double check to make sure they weren’t taken from any episodes, because they look like they came straight from the pen of Dennis Lee. There’s songs about Gobo wanting to help others, how Boober and Wembley shouldn’t be frightened on their journey, and how Gobo makes for a great leader (not that he needs the ego boost). 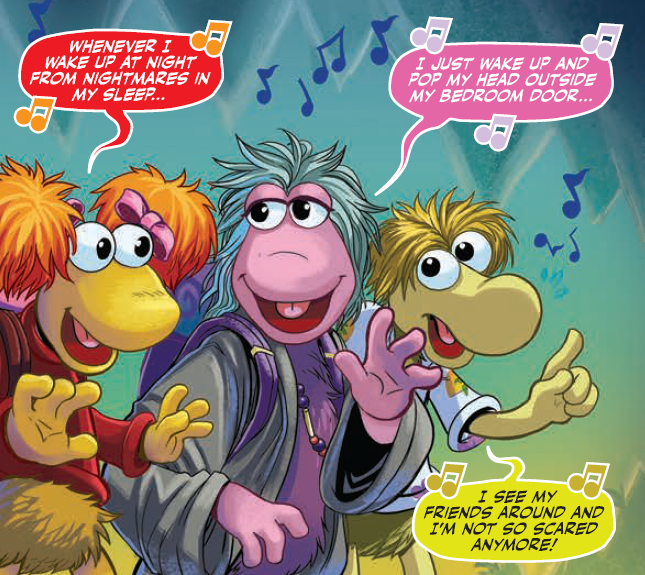 There’s a bounty of takeaway themes when it comes to the Everspring series. As already mentioned, there’s thematic substance centering around taking care of the environment, not judging others, working together, and becoming a leader. There also is an underlying theme of how it’s great to build things and help out, but how you need to have a plan or else your project’s gonna fall through.

Gobo’s want to help others seems to be the overarching theme, which is quite apparent once Marjory points out all the leadership skills he has and all he’s accomplished. One of the last bits of narration covers the moral of Gobo’s tale: “But just being you is the best thing to do, trust yourself, take a risk, and you’ll see.”

As a whole, Fraggle Rock: Journey to the Everspring makes for a whimsically delightful read. It will make you feel like you’ve discovered a forgotten, hidden episode of Fraggle Rock that never aired. It’s exactly the type of content I’m sure Jim Henson would be happy to know exists; assisting the continuation of his amazing creation, living on for generations and generations to come. 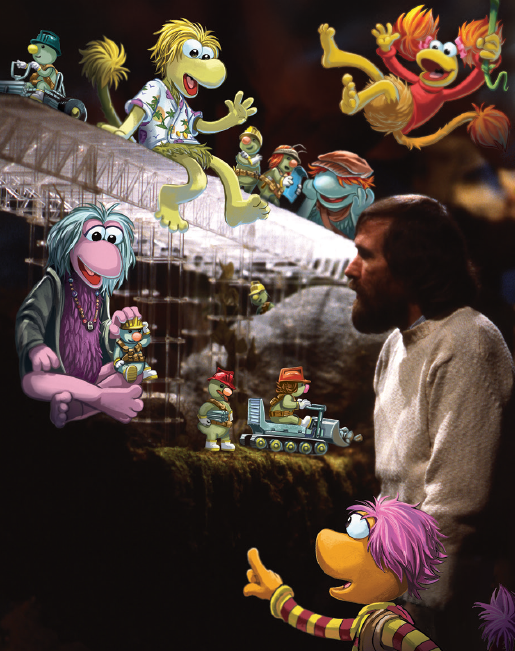 Click here to journey to the Everspring over on the ToughPigs forum!