We’re two episodes into Fraggle Rock now, and the show is still finding its feet. I have mixed feelings about this episode, “Wembley and the Gorgs,” but I’ll tell you one thing: this show already has decided it’s not pulling any punches.

In this episode, our plucky, bug-eyed lime-green lil’ buddy has a fun little adventure that teaches him a valuable little lesson. “I guess,” says Wembley, “some slavery feels like freedom.”

That’s right, this week Wembley learns all about abusive relationships when the Gorgs turn him into a servant. At first, Wembley loves getting attention and approval from them. But his friends help him realize that the Gorgs don’t have his best interests in mind. They only care about what he can do for them, not about a mutual relationship of cooperation and understanding. Not only that, but they also want to thump the other Fraggles for not being as fawning as Wembley is.

That’s a lot to throw on audiences in the second week of a kids’ TV program. But it’s an important and nuanced lesson, really. The Gorgs aren’t as obviously cruel to Wembley as most 80s kids’ TV villains are. They’re not Gargamel or Cobra Commander, torturing our heroes. They’re selfish to the point of being abusive, but not selfish to the point of “trying to blow up the ocean” or whatever Cobra Commander was up to on another channel.

I like the Gorgs as characters, and this episode is a real spotlight for them (and the first appearance of Ma and Pa). They’re such fun, bouncy puppets thanks to excellent movement from suit performers Rob Mills, Gord Robertson, and Trish Leeper. Personality-wise, Junior is an amazing comic performance from the late, great Richard Hunt, and we’re already seeing his charmingly naïve personality develop here.

Ma and Pa Gorg, however, aren’t anywhere near as lovable. Sure, there are some second-episode-growing pains – Ma in particular has an uglier puppet this season that will be improved later – but these two never really become all-stars. For all anyone can say about this show’s nuanced portrayals of real-world villains, Ma and Pa are always a little too mean and one-note for my tastes. Unfortunately, they don’t get better in this show, and they also don’t get better in Back to the Rock.

Still, you can’t fully hate any of the Gorgs. They’re just selfish and foolish, not criminal masterminds.

And despite some rough edges, you have to love Fraggle Rock for having these nuanced goals and wanting to take courageous swings. All that’s going on, and also the Fraggles perform a “Jailhouse Rock”-inspired number while wearing tiny suits of armor made from kitchen supplies. What more could the king or queen of the universe ask for?

Strongest Moment: The Gorgs are a funny critique of out-of-touch leaders. When they give the Fraggles a “fair trial,” the satire becomes surprisingly biting.

MVF: It has to be Wembley. His name is in the title.

First Appearance Of: Well, as mentioned, Ma and Pa Gorg appear for the first time.

But more importantly, this is the first “appearance” (or, I guess, mention) of Doc’s neighbor Ned Shimmelfinney. We never see Shimmefinney in the show’s run, but starting in this episode, we hear a lot about him. Sprocket always makes this amazing vomiting sound and pantomimes dying whenever Ned is mentioned, and it’s always hilarious. This is also the first appearance of Shimmelfinney’s cat Fluffinella, whom we do see, briefly, She’s performed by Karen Prell and has an amazing design you can see in full on Muppet Wiki.

Most Classic Moment: When captured by the Gorgs, the Fraggle gang performs “Fraggle Rock Rock,” which is a very fun old-school rock-and-roll number with some creative instrumentation. This song isn’t one of my favorites, but I can’t deny its appeal (even if a large portion of that is the very apt title). Of course, the inimitable Foo Fighters performed this song years later on Back to the Rock, even though they do not know who Mokey, Red, and Boober are, or even what a Fraggle is.

Musical Highlight: You know what song I prefer to “Fraggle Rock Rock?” Wembley’s Fraggle ballad “Here to There.” It’s a very cute, quick bite of a song. On the official soundtrack releases, it’s mixed in a fun way so it sounds like Wembley is moving from here to there.

Coolest Puppetry Effect: In early Fraggle Rock episodes, whenever the Fraggles appear alongside the Gorgs, the puppets are replaced with miniature, remote-controlled Fraggles. This lets our heroes be in-scale with the titanic royal family. These puppets are cute, but they’re not very believable and they’re very stiff. There’s a reason they stopped using them in later seasons in favor of chroma-key.

One More Thing: Uncle Matt learns a little about freedom and slavery in this episode when he sees some kites and balloons and thinks they’re wild animals that have been put on leashes. It’s your typical Matt thing, I guess. But I do want to shout out the best part of early Matt sketches, which is his original theme song. It’s some amazingly dated 80s techno that perfectly conveys “this guy is clueless but on an adventure.” I’d love the backing track so I can play it whenever my cat walks into a room.

Click here to wear a tiny suit of armor made of kitchen supplies on the Tough Pigs forum! 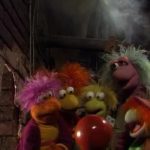