It’s that time again!  Time for us to get a peek at all of the toys we can expect to see in the next year or so.  And usually this is where we’d tell you all about how disappointed we were by the lack of Muppet stuff.  But… could it be?  We actually saw some great Muppet, Henson, and Sesame stuff at this year’s Toy Fair!?  What is even happening??

There may not be a ton of Muppet toys heading our way, but there’s some good representation from each of the major food groups: Muppets, Sesame Street, and Henson Company.  Let’s check out the highlights!

Diamond was showing off their current line of amazingly detailed Muppet action figures.  We got our first real look at the fourth series, which will complete the Electric Mayhem band, introduce the world to Sam the Eagle and Rizzo the Rat, and fill a bucket with Swedish kitchen accessories.

Diamond also had the third series on display, which will be in stores later this year.  Did I mention how amazingly detailed these are?  Look at that amazing Rowlf!  And that perfect Floyd!  I can not wait to get my hands on these things. 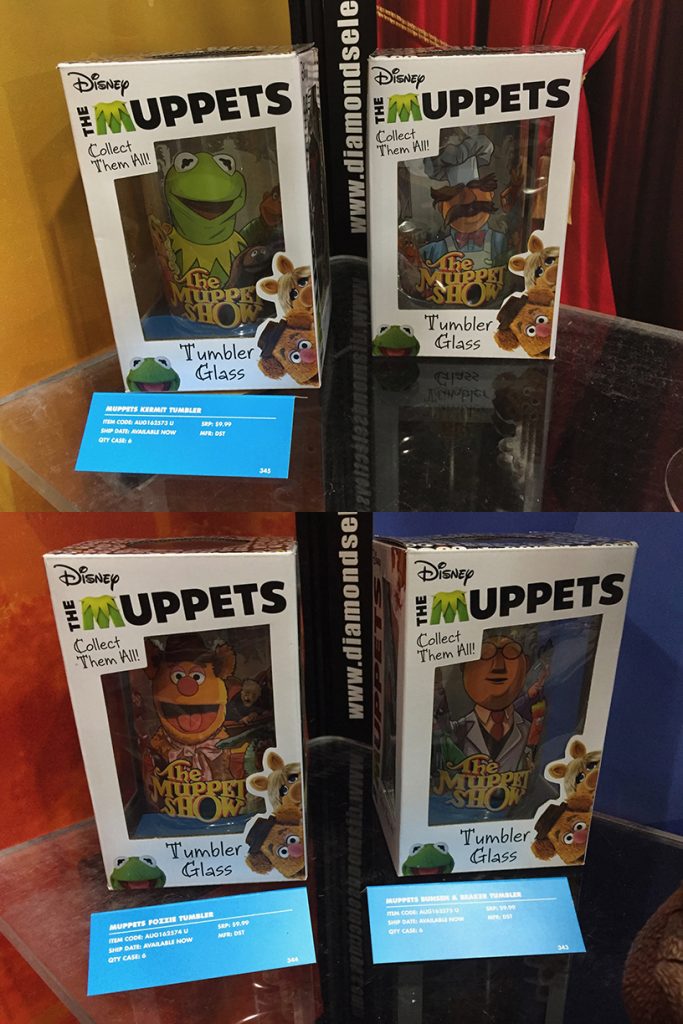 Diamond also has more Muppet pint glasses for sale, graduating from simple logos like the Pigs in Space or Muppet Labs insignias to these character collages.  Plus, I hear they’ll make your water taste like chocolate milk. 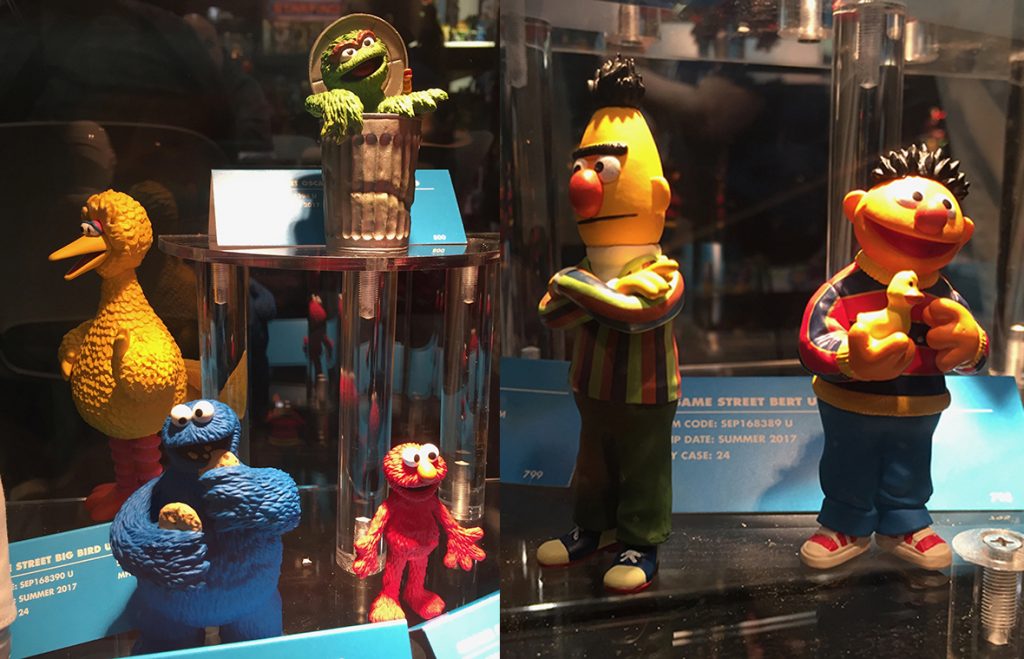 Medicom will be producing these Sesame Street figurines, in stores this summer.  We don’t have a lot of details just yet, but we’re super impressed at how intricate these look.  We’ll figure some stuff out and get back to you on these beauties. 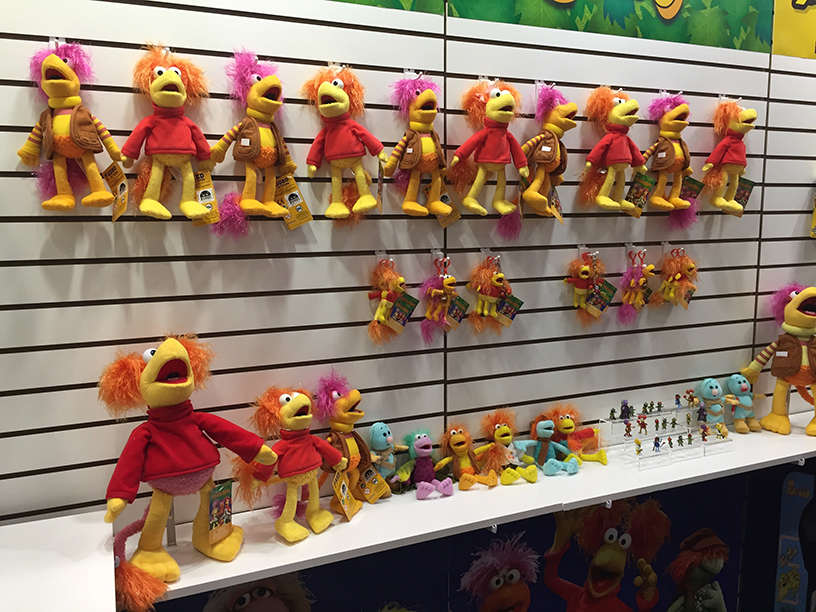 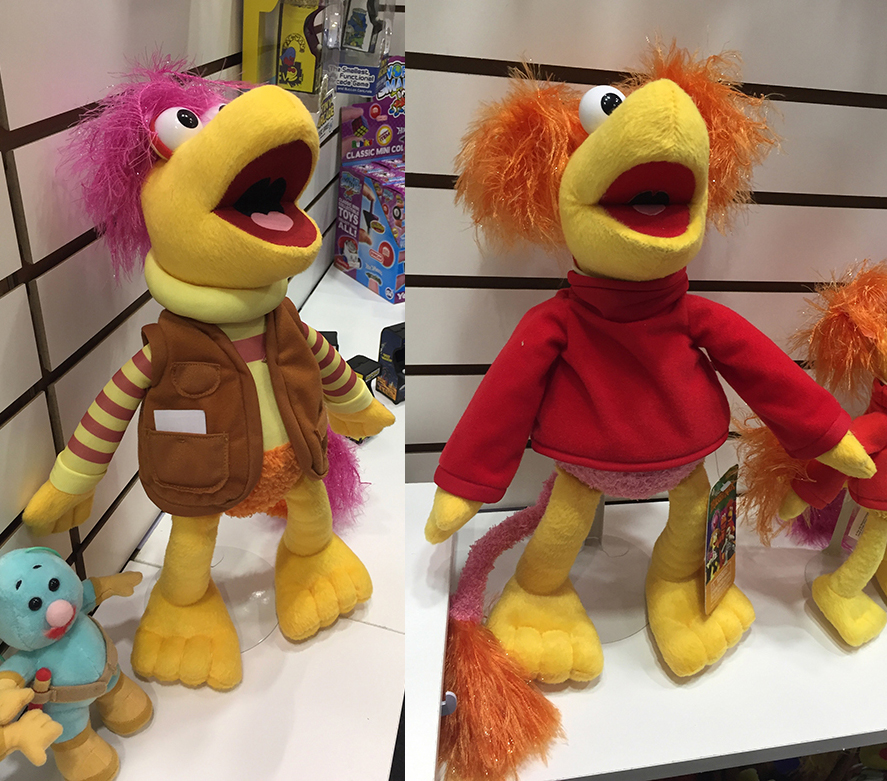 The largest of the Fraggle plush (at about 15″) are these Gobo and Red dolls.  When you hold Gobo’s hand, he plays the Fraggle Rock theme song, and Red does the same when you clap her hands together. (Or is that “clap-clap”? No? Just one clap? Okay then.)  These two will be in stores this spring. 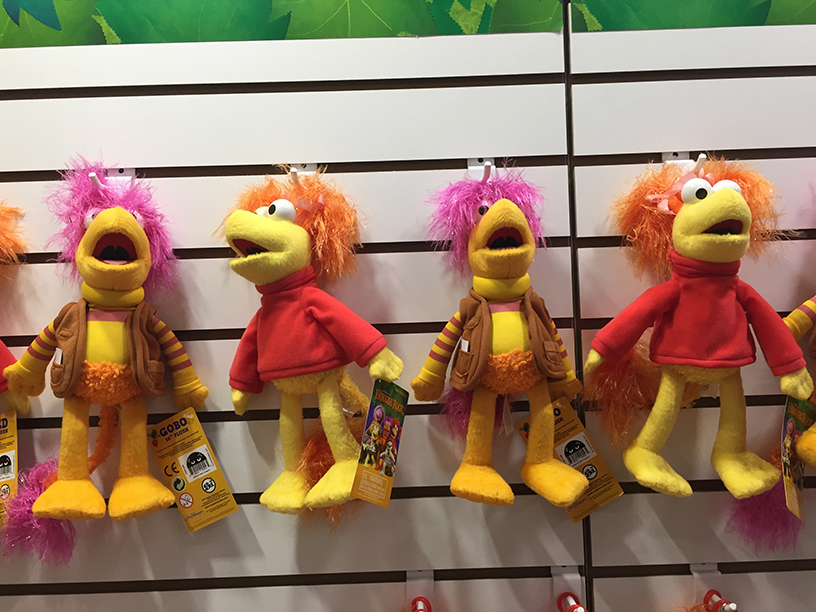 Were those Fraggle toys too large for you?  Well, these slightly smaller Gobos and Reds come in at 10″, and you’ll have to sing the theme song yourself.  They will also be in stores this spring. 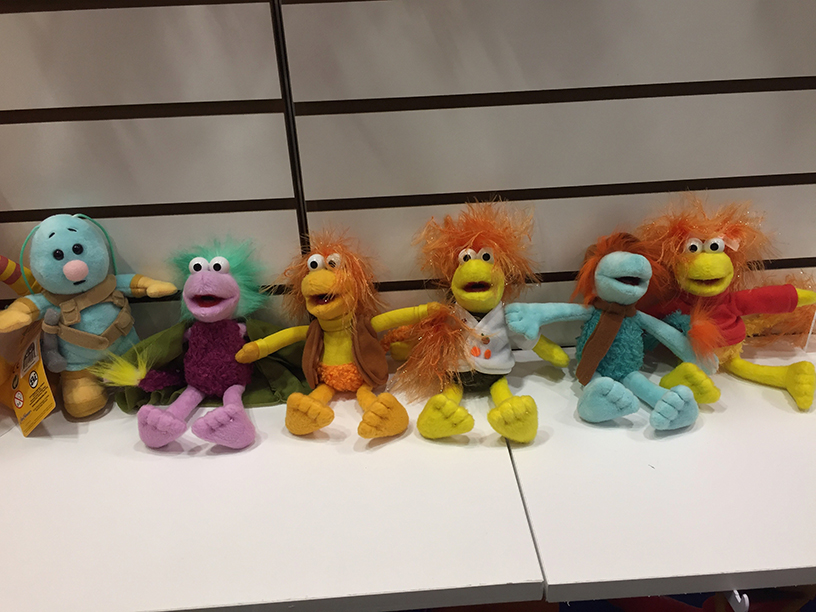 But what if you want your Fraggles even smaller?  Good news, we’ve got you covered!  With bonus Mokey, Wembley, and Boober!  Oh, and Doozers too (though I suppose they’d be giant Doozers, depending on which Fraggle plush they’re standing next to).  These kids are about 6″, and they too will arrive in the spring. 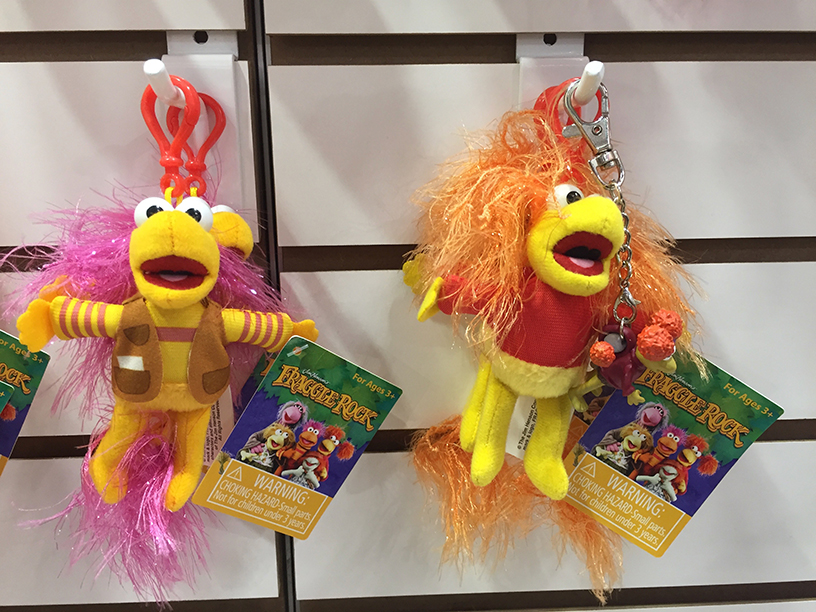 Smaller Fraggles, you ask?  The Russian nesting doll of Fraggledom continues with these Gobo and Red keychains!  When do they arrive?  You guessed it, this spring. 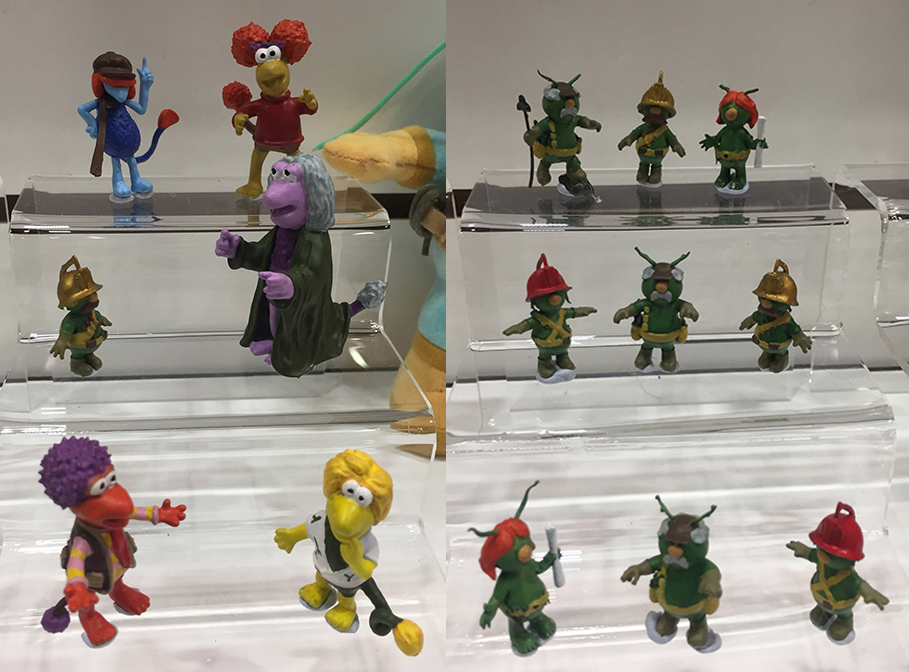 You want smaller??? You’re crazy! But you’re not alone.  We’re also looking forward to these Fraggle and Doozer vinyl figures, which won’t be in stores until fall, 2017.  If I had to guess, I’d say they’re around 1.5″ tall (with the Doozers coming in even smaller).  They are mad tiny.  We don’t yet know how they’ll be sold, but a good possibility will be blind bags. 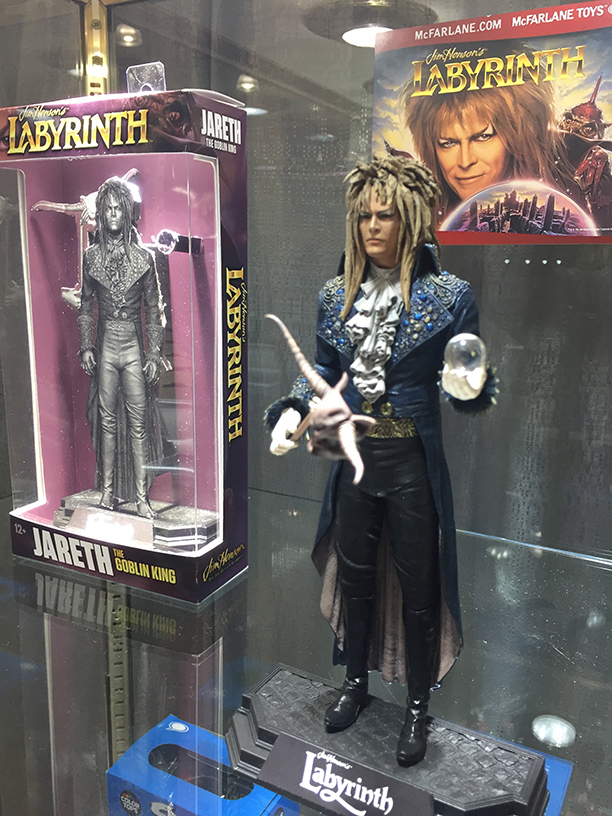 Over at McFarlane, the toy company that made its name on super-detailed action figures, they have a new Jareth figure.  As you can see, he’s dressed for a masquerade, complete with horned mask and crystal ball.  He’ll cost just $19.99, and he’ll be in stores in time for the holidays later this year. 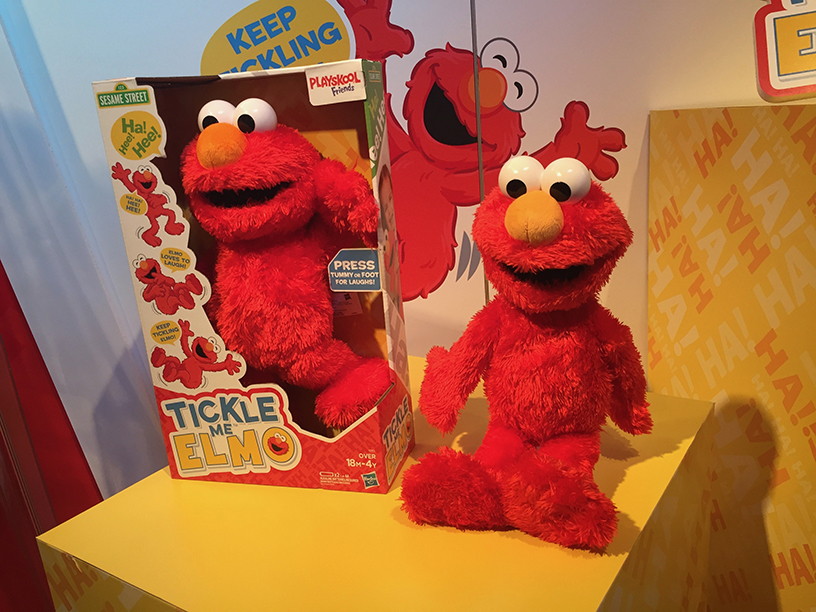 We also visited the Hasbro showroom, and while most of their Sesame Street merchandise was similar to last year’s, their feature plush was something new… or, really old.  They’re bringing Tickle Me Elmo back, this time with added huggability (he’s super soft), and several sensors for tickling.  He’ll cost $29.99, and he’ll be in stores in the fall. 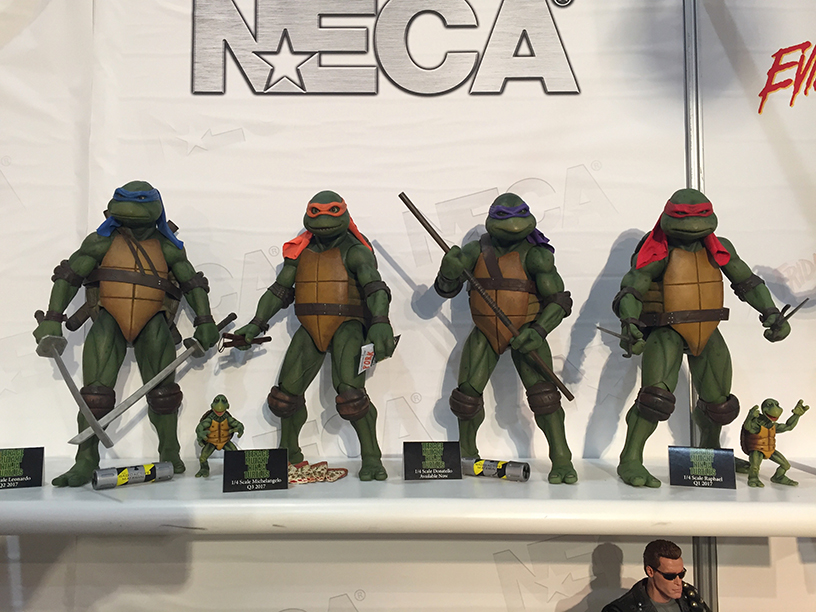 While not strictly Muppet-related, the Teenage Mutant Ninja Turtle costumes from the original movie were created by the Henson Company’s Creature Shop, so I think they count!  And as you can see, these figures are direct influences from the movie versions.  Plus, they come with baby turtles! (Pre-teen Mutant Not-quite-ninja-yet Turtles?) 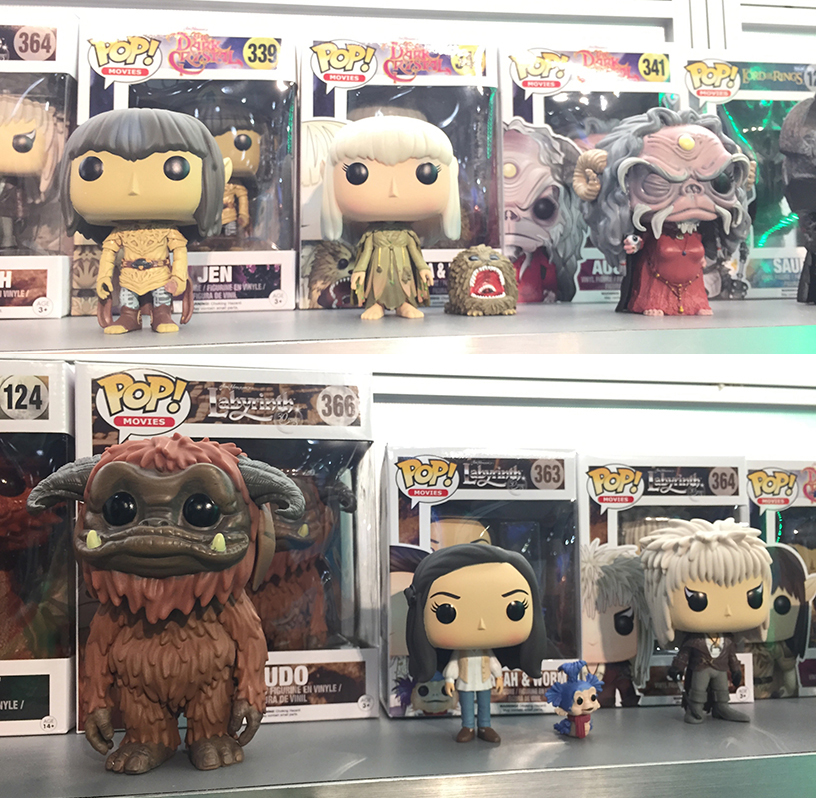 We were hoping to see some cool stuff at the Funko booth, what with the Herry Monster and Superhero Kermit figures recently announced.  Unfortunately, all we saw were these Labyrinth and Dark Crystal Funkos, which are admittedly awesome, but not quite new anymore.  Ah well, we still love these Funko things. 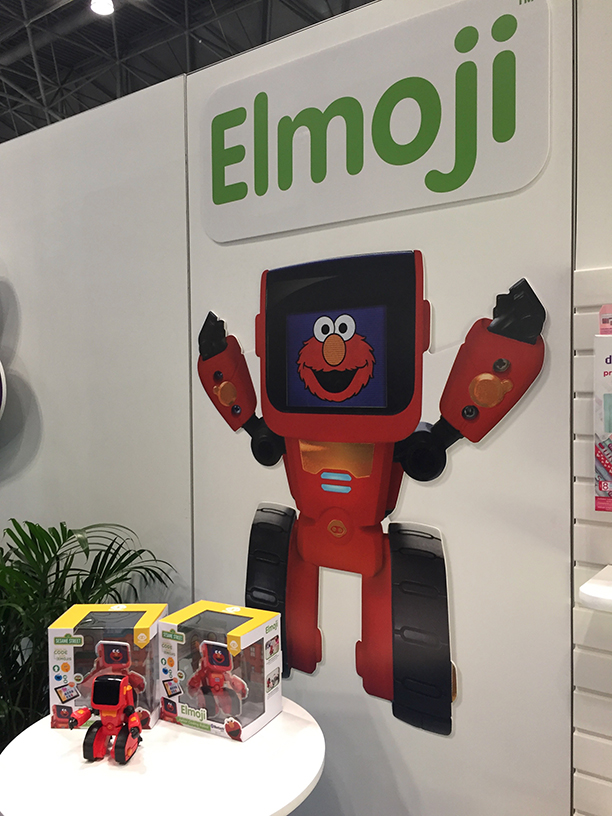 The Elmoji robot was revealed at CES earlier this year, but this is the first time we really got to see it.  Apparently your child can use an app to feed emojis to your little droid, and he’ll move around.  It’s meant to be a preschool version of coding, which is an amazing idea, and could lead to a whole new generation of computer engineers. 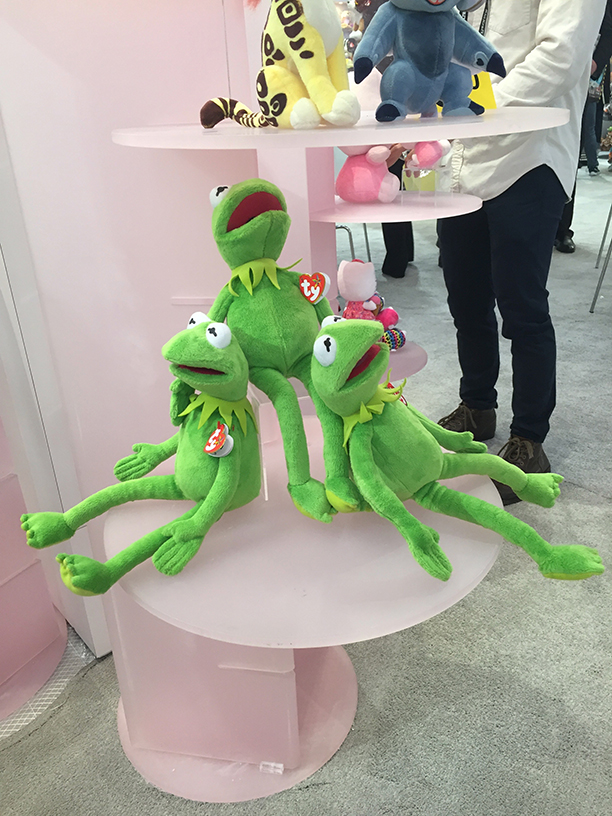 Ty was back at Toy Fair, once again showing off their Kermit dolls that look like they got stuck in a conversation with a chatty, boring coworker.  The Kermits were relegated to the bottom tier of this stand, proving that Ty is placing them closer and closer to the ground ever year.  By 2019, I’m expecting them to dig a hole in the convention floor just to display their Kermits.

Gund is always a good stopover for Sesame Street plush, as they tend to keep a stash on display.  There isn’t much notable here, save for a few soft playsets and an Elmo that sings “Take Me Out to the Ballgame”.  Still, it’s satisfying to see the consistency of a rack full of Ernies, Snuffies, and Counts at Toy Fair each year. 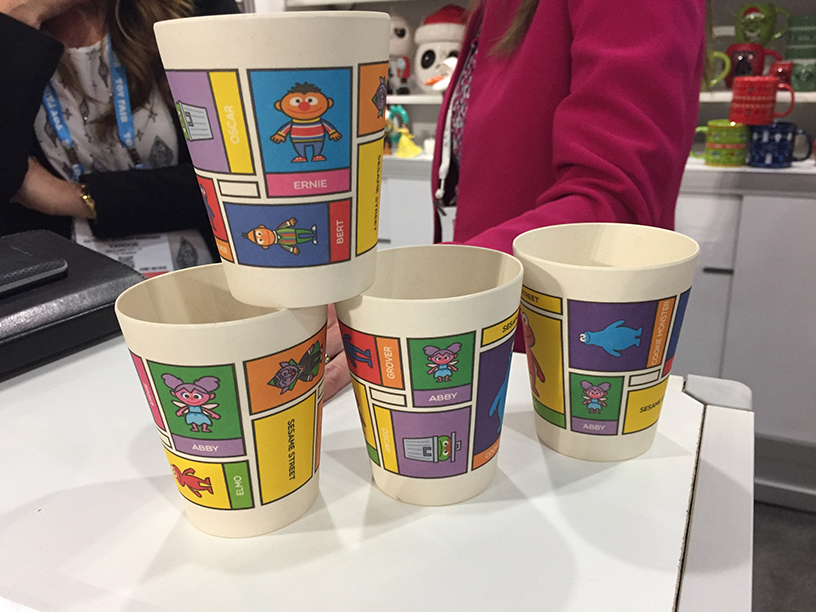 Vandor is a company that makes cups, mugs, water bottles, and other drinkware.  They’ve got the Sesame license, and so they had some fun stuff on display.  Our favorite were these bamboo cups, which have what looks like a Japanese chibi/video game hybrid design going on.  They’re very Piet Mondrian, wouldn’t you say? 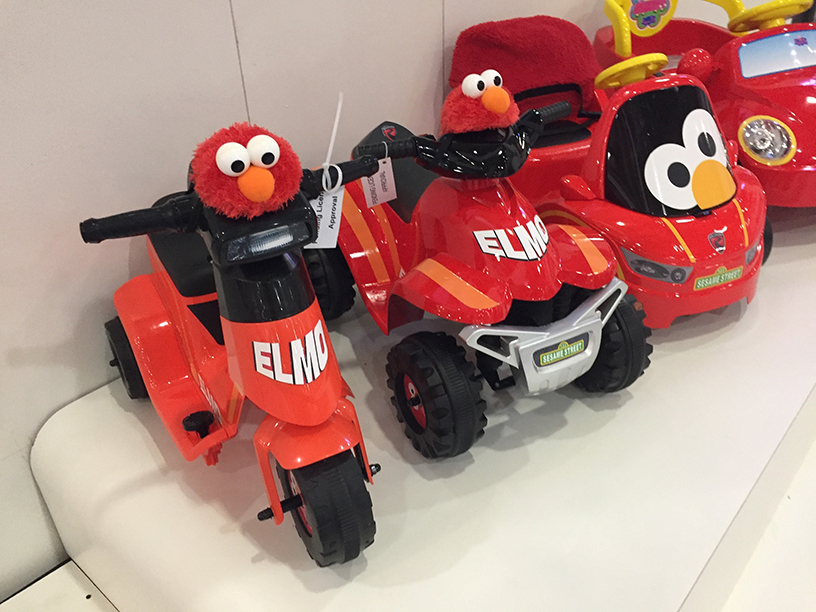 On your way out of Toy Fair, if you can’t leave fast enough, you can take one of these Elmo scooters from Rollplay.  I mean, they’ll chase you down and make you pay a hefty fine, but it’s so worth it.

And that’s it for this year!  Keep an eye out for the new Muppet merch at your local toy stores, and we’ll look forward to next year’s Toy Fair!

Click here to buy a thousand tiny Doozers to decorate the ToughPigs forum!