Ernie vs Bert, Round Seven 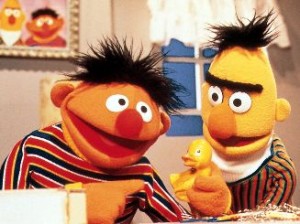 Finishing up this month’s Anthology, here’s a classic sketch from the mid-70’s:

This, to my surprise, is my favorite line of this sketch: “Ernie. I’m trying to be patient.”

As I’ve been writing about Ernie and Bert this month, the thing that’s been the most surprising is how funny I think Bert is. It’s easy to overlook Bert, but his deadpan responses are really fantastic. It’s obvious by the time that Bert says “I’m trying to be patient” that Ernie has made an enormous mess of everything, but Bert still has some hope that somehow it can all get straightened out.

At the beginning of this month’s anthology, I’d asked the question, “What kind of fight is this, anyway?” And this sketch reminded me of something I’d read about clowns a while ago, which may be an answer to that question.

The history of clowns is a little hard to pin down — when I’ve tried to read about it, it’s hard for me to tell what’s fact and what’s legend. Some of the clown tradition apparently comes from Italian commedia del arte, some of it from medieval jesters, some from Punch and Judy shows, and from who knows where else.

But this is a thing that I know: In the European clown tradition, there’s two main types of clowns — the White Face (Pierrot) clowns and the Red Nose (Auguste) clowns.

In vaudeville terms, the Red Nose is the comic and the White Face is the straight man. That’s how comedy teams work: One person tries to maintain order, and the other one breaks all the rules. That’s the conflict that makes the team funny. Rules are being broken, the social order is being turned upside down — and the audience gets the satisfaction of watching from a distance as the authority figure gets mocked and duped.

So here, in this sketch, Bert is hoping that somehow he can travel through Ernie’s looking-glass system to get back to some kind of sense. Where’s the sugar? Where’s the fish? Behind these questions is the suggestion that if he can just understand the system, he can make it right again. Of course, he just ends up with a pot on his head.

Bert’s the older brother, the parent, the square — and he’s got about as close to a White Face as a colorful Sesame Street Muppet can get. Ernie’s the trickster, the disrupter — and he’s even got the clown’s Red Nose. I don’t know if Henson and the puppet builders were specifically thinking in clown terms when they designed Ernie and Bert, but it’s quite a coincidence if they weren’t.

So, what kind of fight is this? The answer, as best I can figure it, is that it’s a comedy fight. In fact… it’s the comedy fight. Ride ’em, cowboy!

Ernie vs Bert, Round Five