Ernie vs Bert, Round Two 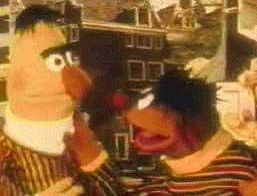 I don’t know dates for most of the Ernie and Bert sketches, so I’m just going to make a guess at them. This one’s from the mid-70’s:

Ah, the licorice whip sketch — not just really funny, but also, I think, really potent and memorable. I haven’t actually tried this, but here’s an experiment: Go find somebody who watched Sesame Street when they were a little kid, and see if they remember this sketch. Try not to lead them much — just ask if they remember Ernie and Bert dividing up a licorice whip. If it’s necessary, remind them that it involved Ernie cutting the licorice whip in half.

I admit, I just thought of this, so I haven’t actually road-tested it myself, but this is my theory: A surprising number of people will remember this sketch without very much prompting. They may actually get kind of passionate about it. They may say stuff like, “Yeah, yeah! Ernie cut the licorice whip in half, and he ate part of it, and Bert got really mad! That always cracked me up.”

Now, this is my prediction: The people who remember this sketch have older siblings.

Think about it. This sketch is all about fairness and sharing — but it makes exactly the opposite point than the one you would expect. If you look at it objectively, it’s not funny, it’s just sad — Ernie dangles Bert’s favorite candy in front of him, pretends to offer him a share, and then eats it all himself. From the point of view of anybody but a younger sibling, this sketch is just cruel, and Bert is just being victimized.

But younger siblings know better. We know what this sketch is really about, and when we were kids, we dug it, without ever really knowing why.

The real point of this sketch is that “fairness” is a sham, that the golden rule is that he who has the gold makes the rules.

Look what happens when Bert gives up on the first licorice whip. For the younger brothers and sisters, that’s the best part of the whole thing. Bert realizes that at this rate, he’s never going to get any of the licorice whip, so he stops Ernie, and he says: “Look, Ernie, do me a favor.” So does he grab the bag of licorice whips and run away with it, laughing and munching? Nope. He says, “Just start all over again with a new piece of licorice whip candy, okay?”

You see? Bert’s a square, man. He plays by the rules. Bert believes that if he’s polite and sensible and patient, then he’ll get his fair share. And when those rules are being broken right in front of him, he just doesn’t know what to do. He’s so rigid, so rule-bounded, that he actually thinks that starting all over again is going to help.

The younger brothers and sisters, we know better. We know that staying quiet and patient gets you nothing but hand-me-downs. If you want something, you have to be the one who makes the rules. And you’ve gotta grab for as much of that licorice whip as you can stuff into your mouth before somebody stops you.

Don’t take my word for it, go out and see for yourself. I predict that older siblings won’t remember this sketch at all, or they won’t remember it as fondly. But the younger brothers and sisters? We know the score.