Ernie vs Bert, Round One 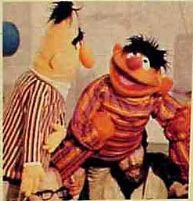 Try and Control Yourself

Sesame Street’s first episode aired on November 10th, 1969 — and what’s amazing about the first Ernie and Bert appearance is that they just started fighting right from the git go. Here’s their first scene together:

Then we’ve got a little cartoon about Solomon Grundy taking a bath, and a film about kids and animals cleaning themselves.

Oh, boy! Do I feel good! Hey, Bert — you ought to take a bath! It would cheer you up! Then you wouldn’t be such a grouch! Bert

(towering over Ernie) I DON’T NEED CHEERING UP! [ Bert nods and exits. ] Ernie

I… I can tell you don’t. Aw, but everybody in the world should take a bath. Then they’d be happy, and — hey. You out there in TV land. Everybody wash!

That, of course, leads into the “Everybody Wash” song, and then a bunch of other stuff. The next time we see Ernie and Bert is following a cartoon about the number 2:

Oh, that was such a beautiful, beautiful film! That’s — d’you know, the number two is my very, very favorite of all the numbers in the entire numbering thing! I just love the number two most of all! [ Bert pats Ernie’s arm consolingly. ] Bert

Ernie, Ernie, it’s just a little movie about the number two. [ Ernie grabs Bert and sobs into his chest. ] Ernie

Yes, wasn’t it beautiful! Aw, Bert! I love it! Bert

Yes, Ernie, that’s all it was. The world must go on! Ernie? Calm down. Ernie

I’ll try to control myself. Bert

Okay. Try and control yourself. Ernie

Okay. Now you’re ready for the next thing? Ernie

The letter E! OH! (He grabs Bert and starts manhandling him again.) Oh, Bert, did you know that that’s my favorite letter in the entire alphabet? Did you know Ernie starts with E? [ Fade to the next cartoon as Ernie sobs… ]

Ding! Round one is over, and the combatants go back to their corners. I’ll be providing color commentary throughout the month on how the fight is shaping up so far, pointing out the stuff that I think makes the Ernie and Bert battle entertaining and meaningful, so students of comedy pugilism may want to get a front row seat here.

The reason why I’m so into this fight metaphor is that I think that’s crucial to what makes Ernie and Bert so much fun — that right from the start, they’re squabbling with each other. Character conflict is something that the Muppets do so well that you don’t even notice how well they do it. All of the great Muppet teams fight with each other — Ernie and Bert, Kermit and Miss Piggy, Bunsen and Beaker, Gonzo and Rizzo, the Fraggles and the Gorgs. That conflict between them is the energy that keeps them going, the ongoing battle is what keeps them locked into the relationship with each other.

In fact, there’s only one Muppet team that I can think of that doesn’t really fight with each other — it’s Statler and Waldorf, not Statler vs Waldorf. That’s because they actually operate as one entity locked in battle with someone else — the real story, the thing that keeps them going, is Statler and Waldorf vs Fozzie. A comedy team needs conflict like an engine needs fuel. Otherwise, they’re not going anywhere.

This dynamic isn’t unique to the Muppets, obviously; this is basic Drama 101. Every story has conflict — otherwise it’s not a story, it’s just a sequence of events. This is the dynamic of successful drama, so therefore it’s the dynamic of successful children’s television — Bugs Bunny spars with Elmer Fudd, Scooby Doo unmasks the ghosts, the Smurfs do battle with Gargamel, Oscar the Grouch struggles against the known universe.

So the question that I want to get into this month is: What is it about this particular battle between Ernie and Bert that we find so interesting and appealing and funny? What kind of fight is this, anyway?