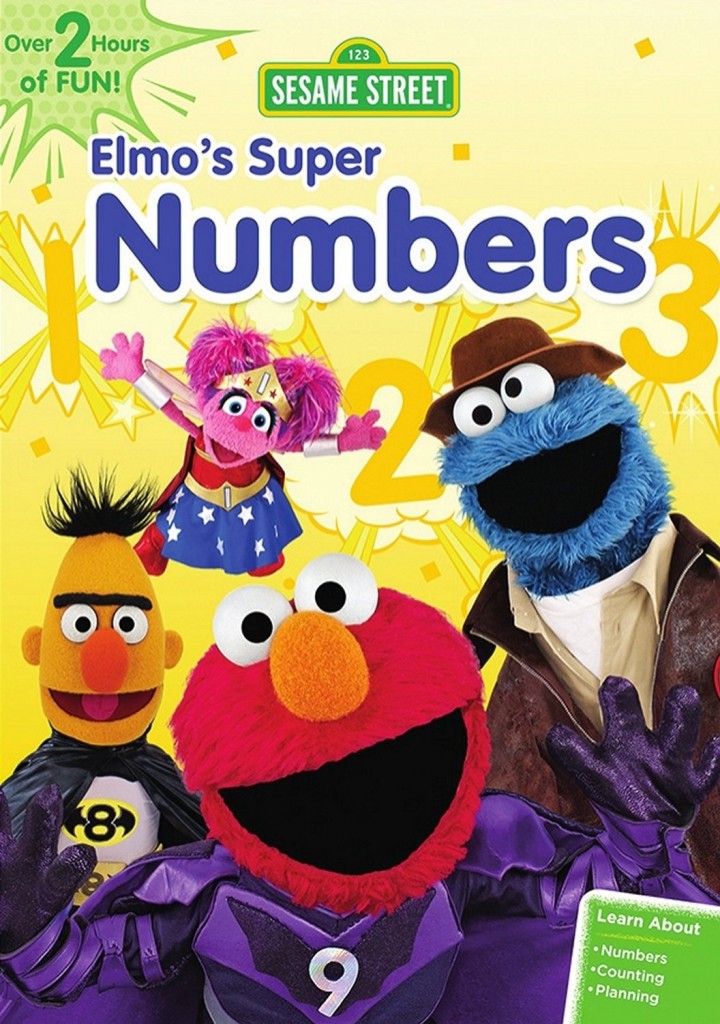 Sesame Street has always been designed to prepare kids for the real world.  To succeed in life, everyone needs to know their letters and numbers, and the show has been giving kids that knowledge for decades.  But these days, knowing your letters and numbers just isn’t enough to be a functioning member of society.  With sci-fi and fantasy-tinged shows occupying a huge share of the airwaves, and a new comic book-based movie coming out just about every day, there’s one other thing that’s vitally important: Being a geek.  And with the new DVD release Elmo’s Super Numbers, Sesame Street is doing their job admirably once again. 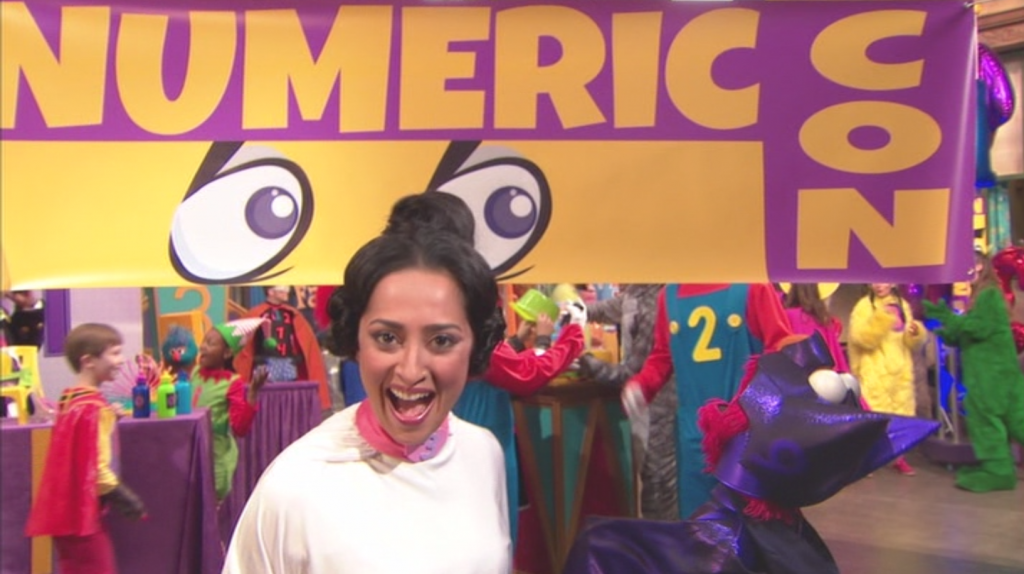 The centerpiece of the DVD is an expanded version of the Sesame Street episode “Numeric Con,” which just aired as part of the new season.  (That has to be the shortest time ever between an episode airing and its release on home video, right?)  This is Sesame‘s big Comic Con parody episode, in which Elmo and Leela attend a convention devoted not to comics and pop culture, but to numbers.  It’s a little awkward that they keep talking about “number heroes” rather than superheroes, but it’s impressive that the writers came up with a pop culture parody for every number between one and ten. Abby is dressed as Oneder Woman, Chris can’t wait to get Fiverine’s autograph, and Elmo is wearing an elaborate costume of The Dark Nine. 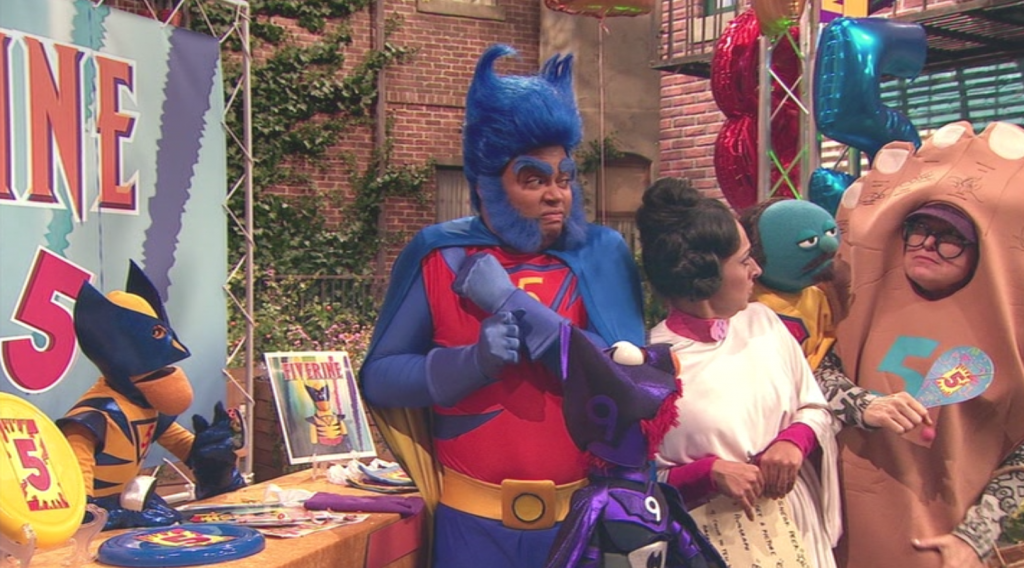 By the way, Numeric Con isn’t being held in some giant convention center or hotel ballroom as you might expect.  It’s right there on Sesame Street, with booths and autograph stations set up on the sidewalk in front of Hooper’s Store and the bike shop, and Mando introducing a “Doctor Two” presentation from the steps of 123 Sesame.  It’s really nice that the residents of the street are so willing to let their block be taken over, whether it’s a number convention, a musical block party, or a Stevie Wonder concert.

Despite being an extended version of the broadcast episode, “Numeric Con” never feels like it’s dragging or padded.  Just like at Comc Con, there’s a lot to see.  On the DVD, “Numeric Con” is structured much like an old-school Sesame Street episode, which was pleasing to a fan like me who remembers the way the show used to be before these whipper-snappers today were even born, grumble grumble.  The format is basically: Elmo and Leela go around the con, crossing items off Elmo’s to-do list and encountering number-themed characters in chronological order.  Usually Elmo has to solve some kind of number-related problem.  Then after each number is accounted for in the street scene, we go to a handful of inserts about that number. 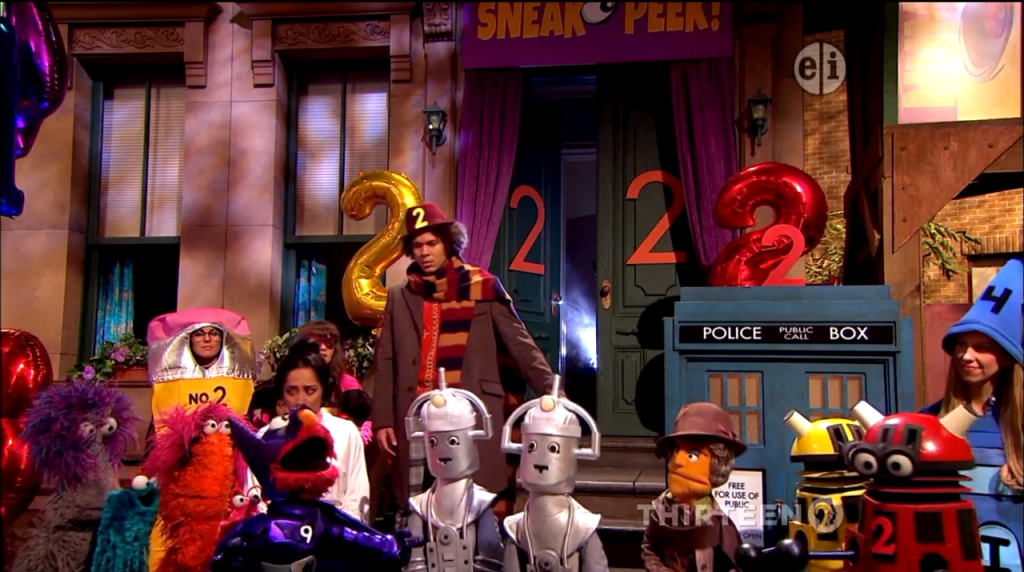 I guess this is all entertaining and educational for kids, but boy are they going to miss a lot of the jokes.  When a Dalek-looking thing exited Doctor Two’s police box and shouted “Enumerate!”, and when Cookie Monster’s In-three-ana Jones said “Why did it have to be cakes?”, I laughed, but I wondered if the children watching might just be mystified.  Heck, some of the less-geeky parents in the audience might be equally mystified.  And yet, the whole thing is being done by hilarious, brightly-colored Muppets, so I think everyone’s covered.

Meanwhile, Leslie Carrara-Rudolph hangs out at the con dressed not as a pop culture character but as a giant foot, with no onscreen explanation ever given.

I don’t want to give away too many more of the jokes, but I will spoil things by revealing that Elmo and Leela end up doing everything on Elmo’s list. Best convention ever!  And say, in case you missed it, a fellow from a certain Muppet fan site appears as an extra in the episode, and you can read his behind-the-scenes account right here. 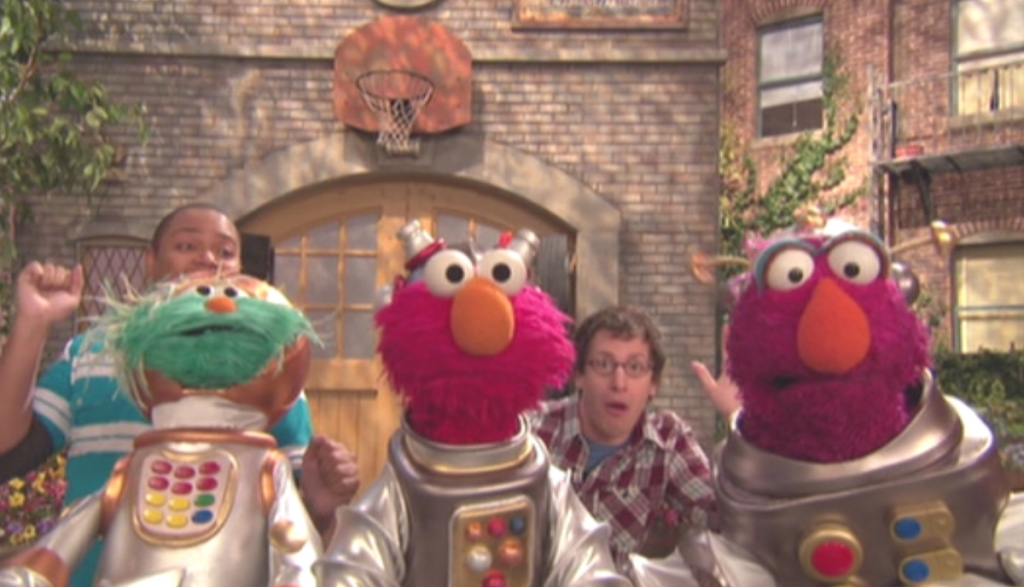 Elsewhere on the DVD, Sesame continues its recent practice of including an entire additional special as a bonus feature.  This time around, it’s Elmo’s Shape Adventure, which was originally released in 2011, so don’t you feel foolish if you paid full price for it then?  This special is based around a street story guest-starring Andy Samberg and featuring Elmo, Rosita and Telly as the “Shape-o-bots,” singing a catchy theme song everywhere they go and wearing truly impressive robots costumes that actually allow them to change into different shapes. I would think their parents would be concerned about them wearing costumes that completely alter their anatomy, but whatever.

After the street story, the rest of the special is Elmo introducing us to different shapes, and then we see various inserts about those shapes, including lots of triangles.  There were several clips I hadn’t seen before, one of my favorites being a funny bit with Murray looking for shapes at a baseball game and ruining the game in the process.  It’s the kind of the thing I could easily imagine happening with Big Bird in the old days. 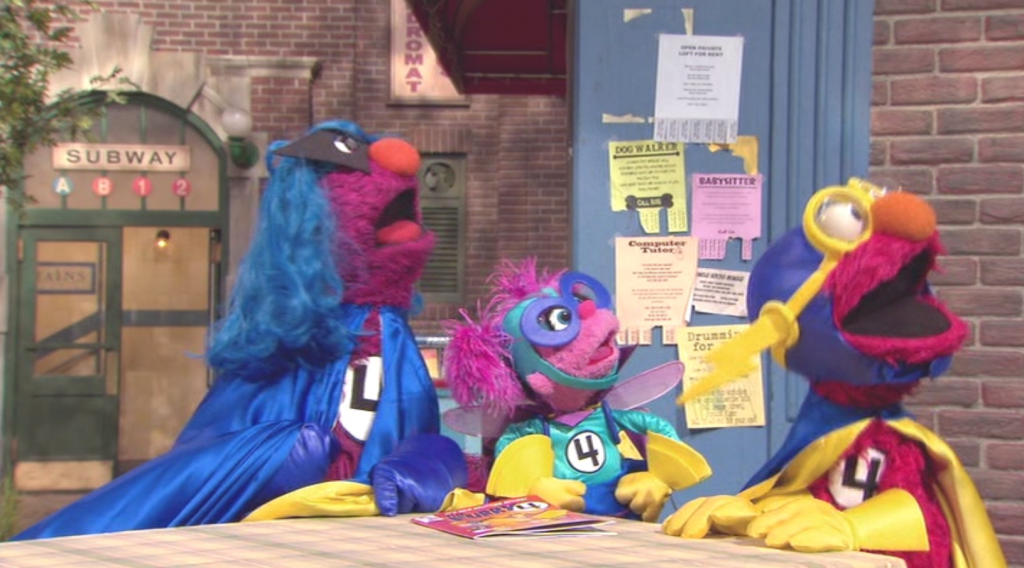 But wait, there’s more!  You definitely get a lot of bang (and BIFF BOOM POW!) for your buck on this disc, as you also get “The Furry Four,” a street story in which Elmo, Telly, and Abby search for a fourth superhero to complete their team.  And “Elmo the Musical: President,” one of the best episodes of “Elmo the Musical.”  And a clip of Henry Cavill, star of the worst Superman movie ever, talking about the word “respect” with Elmo.  AND when you put the disc in your computer, you can print an issue of the Sesame Street comic book with a “Super Elmo” story. Note that according to the cover page, it’s for ages “TEEN AND UP,” so don’t even think about giving this Elmo comic book to your kids.

If I were one for dumb wordplay, I would perhaps say that this DVD is Amazing, or Spectacular, or Astonishing, or Incredible, or even Uncanny.  And I am one for dumb wordplay.  So let’s just pretend I said all those things.  Elmo’s Super Numbers is a good DVD.  Excelsior!

Click here to geek out on the Tough Pigs forum!