Click here for the previous installment of Great Muppeteer Duos! 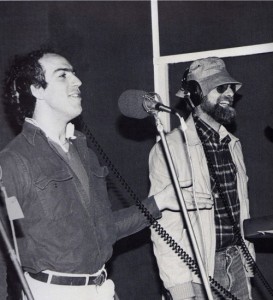 On paper, Jerry Nelson and Richard Hunt don’t look like they’d mesh well. Nelson was an Oklahoma cowboy and a classically-trained puppeteer who worked with Bill Baird and at one point had tried his hand at being a country singer, and Hunt was a young gun from New Jersey who was fresh out of high school when he joined the ranks of the Muppeteers. But as it turned out, their comic sensibilities and versatility in character made them a perfect match. (In fact, their resourcefulness made them the go-to performers for one-off characters. Though it’s never been officially tabulated, Nelson and Hunt probably rank first and second in terms of individual characters they’ve performed.) This seemingly odd couple worked so well together that they produced some of best character duos in Muppet history. 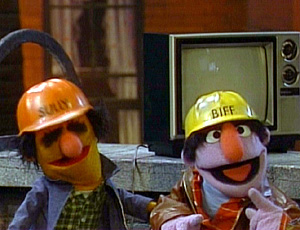 Sesame Street’s resident construction workers may have had gruff exteriors, but deep down, they had a friendship deep enough to rival a certain nearby duo. Perhaps the reason for the duo’s lasting success is the fact that each of them served a different purpose for the other. Biff was certainly the more talkative of the two (partly entirely because Sully never said a word), and often served as the impetus for the pair’s misadventures. Sully, the strong and extremely silent type, was more the technical whiz (building a piano when Biff wanted to listen to music), and the emotional outlet for Biff. Sometimes you just need a friend who says everything by saying nothing. While little may have been actually built, their adventures were certainly constructive. 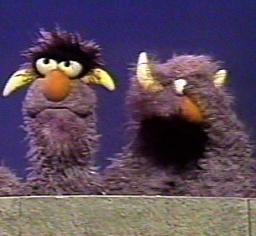 Sometimes a character needs two performers, but the Two-Headed Monster took it to a level all its own. With two heads and two distinct (yet somehow similar) personalities, the Two-Headed Monster made Sesame Street viewers howl with laughter as we learned conflict resolution and how sounds make words. They’ve done it all, from managing to keep disco alive in 1984, to playing Santa Claus, to hanging out with Cab Calloway (which makes them at least as cool as the Blues Brothers). We may never know everything they’re trying to say, but it’s never hidden that they’re having a good time. 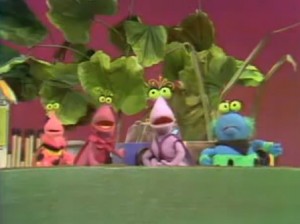 Oh, you Twiddlebugs. You tiny creatures certainly soldier on in the face of adversity. Your creativity brought you solutions that solved your problems, despite not noticing important things to a level that would make Charles Darwin himself question the concept of natural selection. Timmy (Hunt) and Tina (Nelson) were the children of the Twiddlebug family, and more often than not were able to uncover a rational answer, such as taking the family car to visit the zoo (a sketch of extraordinary Twiddlebug obliviousness, as Papa Twiddlebug says that they could fly to the zoo, but they don’t have wings), knowing what a smoke detector was (a sketch where Tina goes by the name Tessa), and the concept of sharing. Perhaps the children’s intelligence proves that evolution is possible on Sesame Street. That would explain why grouches are able to change their fur color and Snuffleupagi have adapted new eyes over the years.

[BONUS!  Click here to hear the Twiddlebugs slowed down to normal speed!] 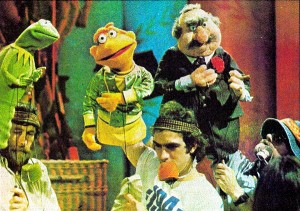 Speaking of families, the world of The Muppet Show presented a complicated relationship between businessman J.P. Grosse and his nephew, Scooter. As owner of the Muppet Theater, Grosse employed Scooter to be the show’s go-fer, as well as to serve as his representative on the show. When Grosse planned to tear down the Muppet Theater to build a junkyard, Scooter tried to appeal to his uncle’s decency in order to avert disaster. Scooter then changed his tune when Grosse proposed that he become the junkyard’s manager. But as The Muppet Show went on, Scooter eventually stepped out of his uncle’s shadow and became an integral part of the Muppets, not only as a stage manager, but also as a performer. He may have joined the Muppets under his uncle’s request, but he became his own man Muppet. 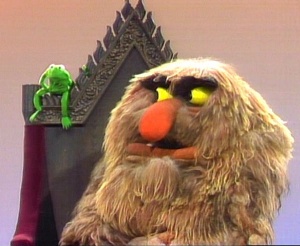 Robin the Frog and Sweetums

Sometimes characters just belong together because they look funny as a duo. And sometimes that can lead to a perfect match. Robin and Sweetums made their debuts in the 1971 television special The Frog Prince, where Sweetums worked for Taminella Grinderfall, a sinister witch who turned Sir Robin the Brave (a title which will make every Monty Python fan laugh) into the frog we know and love. Nelson actually performed both Robin and Sweetums in The Frog Prince (with voice-over artist Carl Banas providing the voice of Sweetums); it wouldn’t be until The Muppet Show’s premiere in 1976 that Hunt would take over performing the loveable ogre. It would be second-to-last episode of season two that would give us the most popular Robin-Sweetums moment: “Two Lost Souls,” from the Broadway musical Damn Yankees. Despite their physical differences, Robin and Sweetums are very similar in character: Robin has strong direction, but no physical strength. Sweetums has enormous physical might, but no direction. They both want to help out in any way they can, and together, they can make for a strong combination. 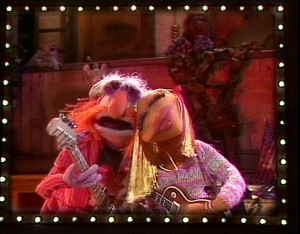 Despite lacking the volatility of Kermit and Miss Piggy or the cherished weirdness of Gonzo and Camilla, the Electric Mayhem’s resident guitar and bass players may have been the most normal, stable couple on The Muppet Show. In fact, they were so stable that they had no qualms about doing a duet for a song about breaking up. They’ve been there through thick and thin, and had no problem backing the other up for a solo number. What could be their secret? What has made this couple so strong? It’s simple: all they have to do is act naturally. (Ba dum bum.) 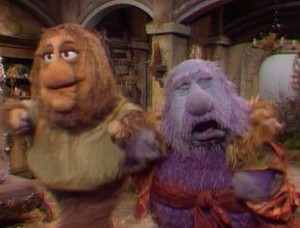 As we bring this chapter to a close, we find ourselves in the world of Fraggle Rock, or more specifically, just above Fraggle Rock. As the self-proclaimed King of the Universe, Pa Gorg often used his authority to task his son with protecting the family garden from the scourge of the sinister Fraggles. Junior was often eager to please his blustering father, who often lets his frustration out with his son, but also respects him. Strangely enough, I think that the duo of Pa and Junior probably best exemplifies the Nelson-Hunt dynamic. Nelson was a classically trained puppeteer who had worked with Jim Henson for years before Richard Hunt joined the troupe. With a sense of eagerness and camaraderie, Hunt quickly took to Nelson; each managed to push the other’s performing boundaries (as well as those of their fellow performers) and make each other better in the process. While they often worked with whatever performers the situation called for, Jerry Nelson and Richard Hunt were often at their best when they were with each other.

Sadly, of the prominent Muppet performer duos, this is the only one where both performers have tragically passed away; Hunt in 1992, and Nelson in 2012. With Hunt and Jim Henson gone too soon, Frank Oz gradually moving away to focus on his directorial career, and Jerry Nelson battling health issues, the 1990’s would prove to be a turbulent time for the Muppet family. But the show went on, and a new class of performers would carry on their fantastic legacy. And as a result of this change, a young pair of performers just beginning their careers at the height of Muppet-mania quickly found themselves the elder statesmen of the Muppet world. But that’s a story for another installment…

Click here to hang out with Cab Calloway on the Tough Pigs forum!